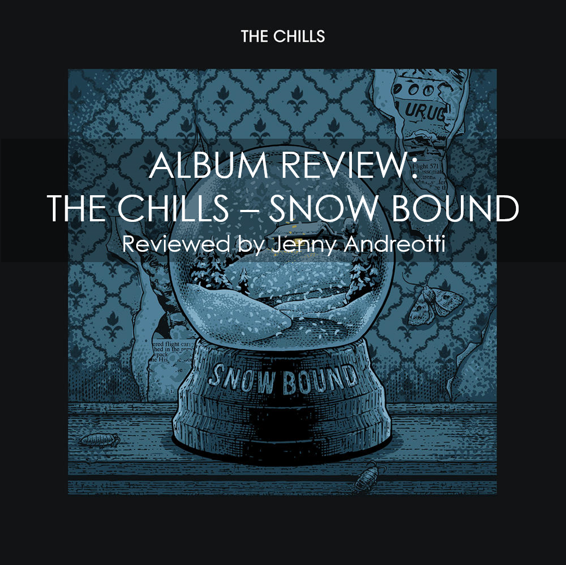 There’s an episode of Twilight Zone called “The Obsolete Man” that has always left a deep and lasting mark upon my psyche. The episode’s portrayal of an authoritarian government that judges librarians (alongside other free thinkers and caretakers of knowledge) as “obsolete” chills me to the bone to this day. The tone of The Chills’ new album Snow Bound leaves me with a similar impression.

For example, with the lead single “Complex” Phillipps explores the danger of a rapidly changing world and how lines of communication have deteriorated to the point that the essentials of life run the risk of becoming “obsolete” as people have increasingly become too focused on petty differences.  The music video for “Complex” is one-part American Horror Story: Asylum and one part The Seventh Seal, and beautifully captures the song’s feeling of existential dread turned hideous nightmare. Hence, with Snow Bound one gets the impression that Martin Phillipps isn’t so much on the outside looking in as he’s on the inside looking out and not too sure about what he sees. As a result, from start to end Snow Bound is instantaneously catchy and enjoyable, yet throughout there is an undercurrent of deep social critique and self-reflection that gives it a beautiful weight and depth.

Lyrically, Phillipps covers some interesting ground. With “Bad Sugar” he shows an understanding of why people turn to religion (even if it is fervently so) while with “Deep Belief” he examines the difficulty of keeping or defining faith and being confronted with mortality which is beautifully expressed by my favorite line from the album, “And so I pray-somedays, sort of.” Similarly, with “Lord of All I Survey” he fondly remembers a love lost while with “Easy Peasy” he tackles the topic of suicide with the deepest of empathy.

Musically, The Chills have often been celebrated for their eclectic sound, in contrast recent reviews have applauded Snow Bound for its’ cohesiveness. The Chills tendency to style jump within a single record has always been I believe one of their greatest strengths, and while I agree Snow Bound is the most cohesive Chills records to date it is still subtly eclectic which I find delightful. For instance, “Complex” has an aggressive post punk feel to it, while “Time to Atone” combines the sounds of Harry Nilsson’s “Coconut” with The Who’s “Substitute” with a heavy dose of Ventures guitar, while “The Greatest Guide” (my personal favorite) pulsates and shimmers glam-rock style (very appropriate for a song that is in tribute to Bowie amongst other lost talents).

Vocally, Phillipps continues to impress. He is, after all, the man who gave us one of the most astonishing indie rock vocal performances of the 1990s with “Water Wolves.” I think of Phillipps as the post punk/indie rock equivalent to Art Garfunkel (Simon and Garfunkel era). Both artists have similar tones, slinky vocals, a love of reverb, and play with soft and hard melodies.

Lastly, the design and artwork of the album features a snow globe containing a cabin with a single glowing light that neatly sits atop a shelf in a dilapidated room. The cover accompanies the album nicely, as it visually represents the Snow Bound theme of social critique and self-reflection. I highly recommend Snow Bound especially the white splattered vinyl that is absolutely stunning in person.
Posted by When The Sun Hits - All things shoegaze. at 2:17 PM