Sold Out! The Next-Level Bedroom Pop of Angelic Milk. 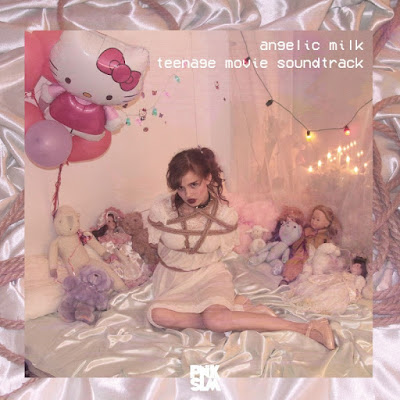 Next-level bedroom pop project Angelic Milk is spearheaded by a Russian teen named Sarah who sings in perfectly unaccented English and recasts the genre as a form of societal menace. She mixes motifs of teen life with bondage and creepiness in a world pervaded by pink and populated with cute plushie toys. The Facebook page for the project makes it clear that the band name “actually means nothing” and describes the music as “Too lo-fi to live, too gothpop to die.”

Angelic Milk’s Teenage Movie Soundtrack EP—the lead track for which is called “Tie Me Up”—expands the scope of the project from solo to full band and brings it into a proper recording studio for the first time. Released on purple 10” vinyl a month ago by PNKSLM Recordings, it’s already sold out! (Fortunately you can get a download here.) The video for “Rebel Black” brings the EP’s third track, an excursion in superfuzzy girl group-inflected dream pop, to vivid visual life. You can acquire two earlier Angelic Milk EPs on a name-your-price basis on Bandcamp.

Video by Valja Banjo Trailertrash and Sarah Persephona
Posted by When The Sun Hits - All things shoegaze. at 5:03 PM