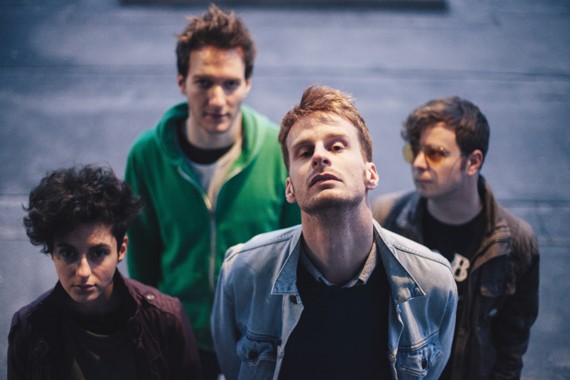 Hungarian project Zombie Girlfriend describes their sound as “dream punk”, which is a perfectly concise way to define the band’s whimsical, reverb-laden brand of garage pop. Benedek Szabó is the mastermind and songwriter behind the project, with László Sallai, Eszter Kádár and Dávid Korándi joining him in the studio and for live performances. The band’s new LP, Wind, comes after a 5-year hiatus that originally began as an indefinite hiatus; because of this, the album is dear to the band’s heart—Benedek’s in particular—and is a shining representation of their victorious perseverance.

The 8 songs on Wind prove that Zombie Girlfriend has not only returned, but triumphantly so. The album kicks off with “Echo Echo”, a soaring jangle-pop affair that manages to capture a sense of suspended euphoria in less than 2 minutes. I live for suspended euphoria, so my only problem with “Echo Echo” is that it’s too damn short! However, the song does serve as a pitch-perfect preamble for what’s to come.

The next track, “Bubblegum”, is a psychedelic pop confection meant to be enjoyed with the windows down on a warm, sunny day. Utterly anthemic. The album then switches gears as it moves into the driving motorik of “Don’t Fall in Love”, mesmerizing the listener with hallucinogenic washes of guitar and a punchy, punk-like vocal delivery. It's the sonic equivalent of revving a motorcycle engine and gleefully speeding off, leaving everything and everyone in the dust as you hit the open road.

The title track marks the album's halfway point and continues to carve out an adrenaline-fueled path with head-bobbing drum work and sweet vocal melodies awash in blissful reverb. The effervescent “Electric Wedding” is probably my favorite song on the album, its low-key surf-rock vibe shot through with threads of acidic, controlled guitar noise. The underlying tension in the song is extremely interesting—a pop song underscored by a live wire. “The Only Boy on the Planet” is a close second-favorite; the fizzy-sweet jangle pop melodies and psychedelic flourishes are catchy as hell, bringing to mind the pure pop simplicity of Magnetic Fields filtered through the distorted lens of The Jesus and Mary Chain.

The hazy closer, “The Small Rain”, brims with reverb-drenched guitar and dreamy vocals that slowly fade out, gently releasing the listener from Zombie Girlfriend's kaleidoscopic, sunny, psych-tinged world back into reality. Naturally, I started the record over immediately and did it all again; one spin just isn’t enough and reality is overrated. —Amber

How and when was the band formed?
I recorded the first Zombie Girlfriend LP in a children’s library during the lonely winter days of 2010. I was still living in my hometown at the time. I moved to Budapest shortly after that and formed a band because I wanted to play live. Back then there was a minor resurgence of bedroom pop in Hungary, called ‘the lo-fi boom’ and Zombie Girlfriend more or less fit into that scene.  Our live sound was always a bit helter-skelter—we couldn’t really capture the feel of the recordings. We had a great time, released some stuff but it didn’t last too long; in 2013 the band went on an indefinite hiatus. We haven’t stopped playing music, but it was only in 2016 that we started playing together again with a slightly different lineup. That was the first time the band sounded like I wanted it to sound.  So—long story short—Zombie Girlfriend is actually a really old band. Gosh!

Can you tell us what the band has been working on and what you've got forthcoming in the near future (any new releases, tour, etc.)?
Our new LP Wind is the first thing the band released in five years and the first ever Zombie Girlfriend album recorded with live drums. It’s funny because our drummer Eszter has been with us since 2011 but we never had the time or money to go to a studio before, so I used programmed drums instead. I think it really shows. We went on a brief European tour in February and we’re planning to do the same next year. Maybe it will be a little easier to book gigs with a new record in tow. Actually, I feel this might be a better time for this kind of music than back before our hiatus.  So I’m definitely not planning to wait 5 years before our next LP.

Do you consider your music to be part of the current shoegaze/dream pop scene, or any scene? Defining one's sound by genre can be tiresome, but do you feel that the band identifies closely with any genre? How do you feel about genres in music, in a general sense?
I started to call our music dream punk because it often merges the simplicity of punk with the sonic aesthetic of dream pop. Dream pop and shoegaze are still painfully absent from the Hungarian music scene; most young bands tend to play 60s throwback psychedelic rock or Horrors-esque stuff (and a few of them are truly great) but it’s really hard to find anyone who could belong to the same scene as us—if there was such a scene to begin with. Genres and scenes can be really important when you try to define yourself and reach out to other people, but I think one shouldn’t stress about them too much.


What do you think of modern shoegaze/dream pop/psychedelia artists, any favorites?
What I like about most shoegaze and dream pop bands is the way they sound. I fell in love with these vast oceans of reverb and churchlike vocal harmonies long ago. But it’s also true that lots of these bands offer way more in terms of sonic craftsmanship than songwriting. I love it when the songs are just as great as the sounds they’re covered in. My current favorites include Soft Science, Furniteur, Beach Fossils, Silver Shadows, Flasher, Anemone and Klaus Johann Grobe.  I’m really into psychedelic music, though not those 60s-indebted guitar bands that are so popular right now—so no love for King Gizzard, Allah Las and the like from me. One of my favorite bands is Black Moth Super Rainbow and Tom Fec’s other project, Tobacco. Talking about the classics…of course I’m amazed by Slowdive and My Bloody Valentine. Oh, and I love Broadcast unconditionally.

What is the most important piece of gear for your sound? Any particular guitars/pedals/amps that you prefer?
Shame to say but I’m not really a gearhead. Dávid, our ex-guitarist used to have this huge carpet of effects. He loved fiddling around with them.  Since we’re a trio now, I needed a meatier guitar sound so I recently bought a Fender Blacktop Jaguar. I have a Fender Hot Rod DeVille amp, a vintage Boss RV-2 digital reverb pedal, a Boss SD-2 overdrive and a Zoom G3n for some modulation effects. If you’re a guitarist and you read this, feel free to laugh at me!

What is your process for recording your music? What gear and/or software do you use? What would you recommend for others?
Before Wind I always used Cubase 5 and a simple external sound card. Some of those bedroom recordings still sound great. I still find it magical that you can now record an album on your own. When I started playing music it still seemed impossible. Wind was also recorded with Cubase but this time we had an engineer and we used decent microphones and amps for the guitar parts. The drums were recorded in a separate studio. I always say that if a song is really good it doesn’t really matter how it sounds, but I have to admit it feels really good to listen to our new LP.  I’d say if you have the chance, try both ways. You can learn a lot.

When it comes to label releases versus DIY/Bandcamp and the like, what is your stance, if any?
I think labels don’t really matter anymore in terms of music distribution. You can release anything and put it up on Bandcamp if you like. Bandcamp is a great thing. It was a relatively unknown site when Zombie Girlfriend started and it’s astonishing to see how far they’d come. What really matters is booking and management—and I think it’s still really hard to do on your own. So I’m secretly hoping that one day someone will come along and say ‘hey, I’d love to organize a tour for you guys. I know that most probably it will never happen. But still, it’s nice to dream about it.

Do you prefer vinyl, CD, cassette tape or mp3 format when listening to music? Do you have any strong feelings toward any of them?
Cassettes are forever in my heart because the cassette was my preferred format when I started listening to music in my teens. I never really felt connected to CDs and I really love vinyl but I do not really listen to any of them. Nowadays I tend to listen to music on Bandcamp or Spotify.  I have lots of my all-time favorite records on vinyl though.

What artists (musicians or otherwise) have most influenced your work?
If we take a look at Zombie Girlfriend’s sound and try to trace its origins, the following bands come to mind: The Jesus and Mary Chain, Black Moth Super Rainbow, The Chills, The Magnetic Fields, The Clientele and The Dandy Warhols. Some of these bands I don’t listen to anymore, but they still influence my songwriting. I listen to all kinds of music – I also study piano so I even listen to jazz but I don’t think you can hear that in Zombie Girlfriend’s songs, haha.

What is your philosophy (on life), if any, that you live by?
You don’t have to be evil or mean-spirited to hurt people—it’s enough if you’re a coward. So if you have something you have to say, don’t be afraid and let it be known, even if it leads to conflict. That’s something I’m constantly working on and hey, I think it’s a pretty good advice.  Obviously, it’s also really hard to do.

Posted by When The Sun Hits - All things shoegaze. at 1:40 PM