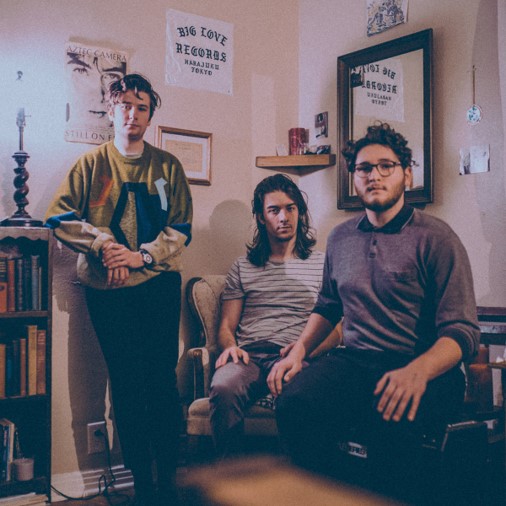 Astragal is a dream pop trio from Houston, Texas comprised of members Jimmy Bent (vocals/guitar), David Sosa (bass) and Sam Enkelmann (drums). Houston’s shoegaze/dream pop scene has bloomed vibrantly in the past couple of years, and Astragal has certainly played an important role in fostering that growth. The band’s nostalgic dream pop sound, shot through with threads of post-punk and awash in plenty of reverb, pays homage to their influences while cultivating a wholly unique spark that belongs to Astragal alone. The four tracks on their most recent release, EP II, feel both familiar and fresh, classic yet new. Catchy bass lines, jangly guitar and charming vocals create a perfectly woven tapestry of pitch-perfect dream pop that is, quite frankly, impossible to resist. We hope you’ll take a scroll through the interview below and enjoy learning more about Astragal.

How and when was the band formed?
Astragal was formed during the fall of 2016 out of pure luck and a couple of compliments. Sam, the drummer of Astragal and Jimmy, the singer and guitarist, met one another at a Beach House show during the Depression Cherry tour. Sam wore a Sung Tongs era Animal Collective shirt and Jimmy wore a shirt that resembled the artwork on the cover of Beach House’s Bloom. They passed along sweet nothings to one another at the show and thought they would never see each other again. It was at a DIIV show that Sam and Jimmy randomly reconnected and decided to meet up with David, the bass player, who Sam met on Soundcloud and Craigslist.

Can you tell us what the band has been working on and what you've got forthcoming in the near future (new releases, tour, etc.)?
After releasing our latest work, EP II, we have decided to get back into finishing the writing for our debut LP. As a band that’s been together for about three years now, releasing an album has been a long time coming. That being said, we feel like we know ourselves a lot better now, both personally and musically, than we did when we first met. The time to write has never been better.


Do you consider your music to be part of the current shoegaze/dream pop scene, or any scene? Defining one's sound by genre can be tiresome, but do you feel that the band identifies closely with any genre? How do you feel about genres in music, in a general sense?
At first we wanted to somehow mix jazz and janglepop together. A Jaco Pastorius/Gilberto Gil/The Clientele/The Field Mice/My Bloody Valentine hybrid. While this was an enjoyable and rather curious experience, we found that we weren’t representing our genuine selves as songwriters.

We took a trip to North Carolina to write, practice, and most importantly, get to know each other better. We came out the other end with a lot of confidence, understanding, and introspection. We now closely identify with bands like Corridor, Preoccupations, The Ocean Blue, and Motorama and have a strong attraction to post-punk, new wave, and krautrock. We still find it important to focus on things from our first songs such as strange chords, time signatures, and fun little dynamics.

What do you think of modern shoegaze/dream pop/psychedelia artists, any favorites?
Astragal has a strong love for what is happening in modern shoegaze, post-punk, dream pop, psychedelia, and indie music as a whole. Living in the time we are living in now with the technology we have has opened our ears to genres we never knew existed. From obscure shoegaze bands like The Suncharms to unusual music scenes like the Volta jazz scene in Upper Volta, we have been able to rediscover sounds that would have never made it to us otherwise. A few modern favorites of ours include those Richmond, Virginia homies Camp Howard, Galveston Island’s very own El Lago, Houston newcomers Barkada, our doppelgangers Glaze, our favorite Anime rockers Rei Clone, Froth, H. Grimace, Chris Cohen, NOLA’s Scenic World, and of course our eternal buds and kings of chorus, Small Chair.

What is the most important piece of gear for your sound? Any particular guitars/pedals/amps that you prefer?
A key component of our sound is the interaction between our guitarist’s Fender Mustang and our bassist’s Rickenbacker. The punch, precision, grit, and clean tones of both of these instruments just work so well together. Our beloved JC-120 guitar amp and the latest addition of a Sunn 300T bass head are also two staples of our sound.


What is your process for recording your music? What gear and/or software do you use? What would you recommend for others?
Lately we have been recording with two of our fine friends from Denton, Texas, Nathan and Blake of Elevator Music. Both of them have excellent ears, musical backgrounds, and recording knowledge. Any song we have taken to them almost always transforms into exactly what we want. They definitely understand how to cultivate an atmosphere where people can voice literally any idea they have no matter how small or grandiose. Our advice for recording is to know exactly what you want before going into a studio and be equally prepared to throw it all away for something even more spectacular.

How do you feel about the state of the music industry today? There is no doubt a massive change underway. How do you see it and do you feel it’s positive at all?
We honestly don’t pay much attention to the music industry at large or worry too much about what goes on in our scene. We have found that keeping your head down, while it may be considered rude, is the best way to have any sense of mental well-being while being in a band. Of course we support our musical friends, local artists that work in media outside of music, and the multitude of great record shops and venues in Houston, but there is little to be said for worrying too much about what may happen to all of it. Things change and we have to worry about our individual lives before letting music industry standards or any type of scene define what we worry about.

In regards to the music industry at large, it’s quite terrifying sometimes. We have met some of the most genuine and sadly some of the most ingenuine people from playing music. It’s often an atmosphere plagued by social climbing and personal gain.

The positives that are present in the music industry are people’s willingness to support smaller bands and be more open to new sounds. People also want to own the music now by buying physical copies, which is fantastic. There is also a larger concentration on mental health in the music industry right now, an issue that has really left an impact on some of our closest musical peers.

Take care of each other before the music.

When it comes to label releases versus DIY/Bandcamp and the like, what is your stance, if any?
I think it comes down to personal preference and what is best for you and your music. A label and DIY/Bandcamp possess different channels for moving music, although sometimes they may meet up and intertwine. For us, starting with Miss Champagne and Wallflower Records (both Houston labels) has been a fantastic experience. We are definitely open to moving forward with a more nationally-based label if the stars align. But if not, we are always just happy to be making music together.


Do you prefer vinyl, CD, cassette tape or MP3 format when listening to music? Do you have any strong feelings toward any of them?
We all have a strong preference for vinyl but great music can be found on any type of format. As a musician it’s important to not discount any format. Your next inspiration could be on an old cassette at a secondhand store or a CD collecting dust in your parents’ car. For us, it all comes down to the music itself.

What artists (musicians or otherwise) have most influenced your work?
Jazz and soul artists have made us stronger players and post-punk has made us more introspective human beings. It’s a combination we are forever grateful for. Some artists we are inspired by at the moment include Cortex, Grant Green, Froth, Broadcast, Pete Seeger, Sam Prekop, Motorama, Life Without Buildings, Herbie Mann, The Clientele, OMD, Chad Van Galen, Corridor, Lithics, Mourn, Ryley Walker, Pat Metheny, Stanley Clarke, Roy Ayers, and Steve Reich.

Can you tell us a little about what you are currently into (books, films, art, bands, etc.)?
Some of our favorite movies include Old Boy, Charade, Breathless, House, Good Morning, Cashback, Lost in Translation, Alfred Hitchcock's Rope, and our all time favorite and least favorite movie is Street Dreams. (We simultaneously love and hate it—it’s such a cheesy movie!) Our guitarist and vocalist, Jimmy, is addicted to Haruki Murakami books. We all really like abstract expressionism and anything suprematic in style. Matisse, Fan Ho, and Jacob Lawrence are huge inspirations to Jimmy. Our bassist, David, makes fantastic collages and is really into contemporary art. Our drummer, Sammy, has the best taste in B movies. Of course our favorite book of all time is Astragal by Albertine Sarrazin. Kikagaku Moyo has been one band that we are all equally psyched on at the moment.


Can you tell us a little about the band’s song writing process?
Our writing process is strictly based on how we all feel. We often practice on Thursday and if for whatever reason we aren’t feeling it then we don’t practice at all. If we do end up with that feeling and need to play music then we go ahead and do it. Feelings are the ultimate starting point for us. Nothing is forced. That’s really the key to a healthy songwriting process. If we get bored and can’t write or practice then we just jam incoherently.

No one person brings anything specific to the writing part. We all just meet up and create the songs together. When we do land on a riff, bass line, or drum part we just see where it takes us and if doesn’t take us anywhere then we don’t bother with it and just move on. We often create the framework for a whole song on the same day the first part is written. We make it as spontaneous as possible.

What is your philosophy (on life), if any, that you live by?
Astragal doesn’t have a philosophy or stand for anything. Sam, David, and Jimmy each have their own philosophies on life that intertwine, coalesce, and contrast one another. The late great Woody Guthrie can best sum up all of our philosophies: “Take it easy, but take it.”
Posted by WTSHamber at 1:36 PM