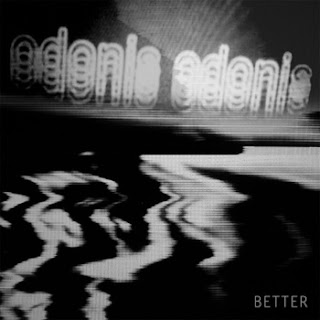 The men in Canadian trio Odonis Odonis are many things; they’re loud, terrifying, energizing, and challenging, to say the least.  Their newest release, the Better EP, is not easily digested, but for those brave souls who are willing to push themselves to the limits of noise and fury, it proves that the three can be as invigorating as ever. This is an effort which truly pushes the limits of what shoegaze and noise can represent, and daring consumers will not be disappointed.

For those unfamiliar with the formula, the band self-describes through the very fitting phrase, “industrial surf-gaze.” While elements of those three genres surely find their way into the mix, they hardly scratch the surface in terms of describing the sound. The mixes are always intentionally murky or ugly, the compositions can go from deep grooves to punk-derived thrashing, and glimmers of light are almost always heavily buried before being swallowed in the tumult again. Through it all, distant and distorted vocals flit between apathetic moans and yelps of destructive euphoria, occasionally falling to a falsely comforting whisper.

For an already provocative band, Better isn’t necessarily a good introduction. While it does highlight the group’s strengths, it also finds them testing their limits and flexing in the claustrophobic space they’ve crafted for themselves thus far. Everything is slightly less obscured than on their debut, though still brutal, and the EP shows new avenues of experimentation. Previously, a track like “Better” might have seemed misplaced, given its incredibly danceable and bass-driven swaying and swaggering, but bookended between “She’s a Death” and “Intelligence”, it fits splendidly. Both tracks stand as perfect examples of what these three can do, and they do so without being completely unfriendly or impenetrable. They stand as some of the best Odonis Odonis has done yet.

That being said, the latter half of the EP may dissuade newcomers. The much more confrontational mood takes repeated listens and a few ounces of courage to appreciate. It drifts so far away from the others as to almost not seem the same band. In a way, though, it is commendable for musicians to be so willing to not settle into routine, especially when their existing framework is fairly specific.  Once more, this is not simple music, but it is daring and can be a welcome break from monotony for those who desire it.

Standouts: “She’s a Death” and “Intelligence”
Goes Great With:
A Place to Bury Strangers
Dirty Beaches
Weekend
The Raveonettes
The Horrors
Posted by When The Sun Hits - All things shoegaze. at 4:59 PM