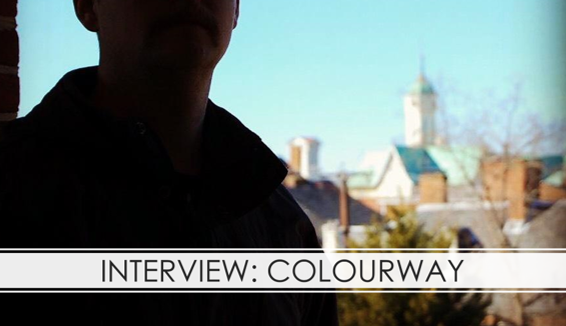 Fredericksberg, Virginia based Colourway is a relatively nascent project, as far as releases are concerned. A debut EP, Coming Undone, came out in October 2o18, and a follow up EP, Seed, emerged in December 2018. In this short span of time, Colourway has made a big impression on us. Happenstance brought us to Colourway’s Bandcamp page when Coming Undone was released, and frankly, we haven’t stopped listening since. The heavy, expansive squalls of guitar and catchy songwriting sound as though they’re being transmitted directly from the sludgy, downtempo heaven of our dreams. There’s a touch of 90s grunge around the edges, but don’t let that throwback tag limit your imagination – there’s a lot more going on here. Colourway’s melodic song structures are also the perfect backdrop for some seriously anthemic lyrics – the sort that beg to be sung along with in the privacy of your car or bedroom. Do enjoy getting to know more about this excellent new project in the interview below. We can’t wait to hear what Colourway drops next.

How and when was the band formed?
Colourway was an idea I had back in 2016. I didn’t have a particular sound in mind, but rather the idea to make music that moved me, that flowed and put it out as a project that had no deadlines or limits. I wanted to be able to write, record and release music at my own pace. I didn’t want the project to be hinged on the image of the band or the social media presence of the band. I just want to put out music and if people like it and want to listen then that’s fantastic.

Can you tell us what the band has been working on and what you've got forthcoming in the near future (any new releases, tour, etc.)?
I am always working on music and running ideas and riffs through my head. There are no plans to tour or perform live any time soon. I have been jamming a couple of the songs with a few friends but there are no plans as of now for that aspect. I’d love to eventually play lives shows here and there. The plan is to keep writing, recording, and making releases.


Do you consider your music to be part of the current shoegaze/dream pop scene, or any scene? Defining one's sound by genre can be tiresome, but do you feel that the band identifies closely with any genre? How do you feel about genres in music, in a general sense?
So I actually had never heard of shoegaze or dream pop until I started releasing little clips of videos and songs on the Colourway Instagram page. People would post things like “shoegaze revival” and shoegaze related comments so I obviously wanted to check it out and see what people were referring to. I’m happy to be associated with shoegaze or dream pop if that is what people feel Colourway relates to. I like a lot of what I’ve heard from those genres. In general, I think genres are good and bad. It helps us more quickly identify what like and dislike as consumers of art. At the same time that can keep us from experiencing new forms of art. I’m proof of this. I would have never heard of shoegaze if not for people telling me that’s essentially what I was writing. I also think being associated with a genre can lead artists to box themselves in and not stretch the creative muscles enough. For this reason, I probably still won’t listen to a whole lot of shoegaze and dream pop because I know that I will start subconsciously reaching for that sound.

What do you think of modern shoegaze/dream pop/psychedelia artists, any favorites?
I love it. I love that these genres seem largely untouched by modern over-production or commercialization. These seem like genres that have maintained their truth. I really appreciate that. I have been enjoying “sleeping in”. “Wither” is sick.

What is the most important piece of gear for your sound? Any particular guitars/pedals/amps that you prefer?
I’d have to say Garageband. The Garageband that came on my Macbook Air is what I use for recording, mixing, and mastering. I think it works well for now so I’ll be relying on that unless something else starts working better for me. I don’t want to give away too many of my secrets but my recording set up total costs me less than ~$600. I just stick with what works.


What is your process for recording your music? What gear and/or software do you use? What would you recommend for others?
My process usually starts with a small piece of a song, whether that be a riff, a lyric, a melody, etc., and then I just start building off of that. I try not to overthink the song. Like I said before, it has to just flow and move me. Once I have most of a song written and recorded I take it on a drive and test the drivability. If you can’t drive to a song then it might be missing something. I love songs that are driving songs. I think the newer song I’ve put out called “Sinking // Burning” is such a drivable song. Try it out.

As far as my software and gear; I use Garageband almost exclusively. I use a $200 interface that comes with emulation software. That’s all I wanna say. My mic is a Perception. It’s a cheap one. Maybe like $200. I also have some used monitors I bought from a friend like 7 years ago for about $150. I think they are BX5? My advice to someone when it comes to music in general, especially recording and writing, would be to just keep it simple. If you feel like you’re trying too hard, stop and reevaluate.

When it comes to label releases versus DIY/Bandcamp and the like, what is your stance, if any?
I’ve always believed that if you can get some financial backing, management and promotional help, all of which is allowing you to focus more on your music, then I see nothing wrong with that. I don’t care what anyone says, if you can make a living playing music then why would you not want to do that. I do see problems with losing your integrity as an artist. Don’t do that. That is not worth the money.

Do you prefer vinyl, CD, cassette tape or mp3 format when listening to music? Do you have any strong feelings toward any of them?
I am fully invested in the mp3 and streaming life. I love Spotify. I do have a small selection of vinyl and a sweet record player that I definitely appreciate. I reserve my vinyl selection to my very favorite bands. I have a few from Dawes, Radiohead, and Gleemer that I cherish and listen to.

What artists (musicians or otherwise) have most influenced your work?
I’d say I get a large influence from attitudes and feelings associated with music. I get a lot of the darker aspects of my music from hardcore and death metal. If I had to name a band or two I’d point out Deftones, Radiohead, Superheaven, Gatecreeper, and Behemoth.


What is your philosophy (on life), if any, that you live by?
My biggest philosophy on life is to make as little impact on others lives as possible. I don’t want to bother anyone or get in anyone else’s way. Life is so hard and I don’t want to make it harder on anyone else. Like, I want to be a shadow in everyday life; existing but not really noticed.

I also try not to have expectations. I think it is unfair to expect anyone to live up to a standard that you have manifested in your own mind. Everyone is doing the best they know how to do and I believe that is okay.
Posted by WTSHamber at 1:18 PM