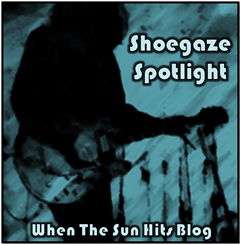 About this week's spotlight:
Who: Nightmare Air
What: WTSH Shoegaze Spotlight feature
Where: Strangeways Radio blog
When: Weekly

Every week WTSH will present a shoegaze/dream pop band on Strangeways' blog, highlighting how very awesome the band is and how you should be listening to them and buying their music and supporting them because they deserve it.

Nightmare Air is an LA-based trio fronted by the dynastic duo of Dave Dupuis (guitar, vocals) and Swaan Miller (bass, vocals). Dupuis, a veteran of L.A. shoegazers Film School (Beggars Banquet) and Miller, whose stark early-2000s acoustic album on Important Records melted hearts and faces everywhere, meticulously layer indie boy-girl harmonies, psych noise loops, fuzz-ripped bass and howling rock power into a fresh, upbeat sound all their own. In 2012 Dave and Swaan teamed up with Detroit heavy hitter Jimmy Lucido on drums to create a live show that is not to be missed...

Posted by When The Sun Hits - All things shoegaze. at 3:47 PM