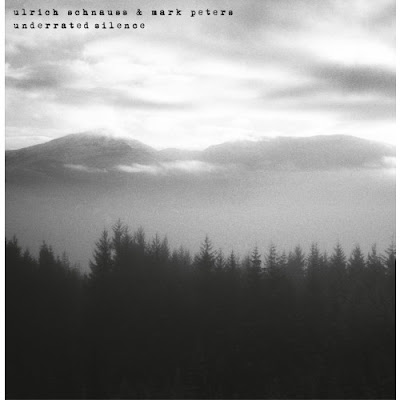 When The Sun Hits Reviews
Ulrich Schnauss
&
Mark Peters
Underrated Silence (2012)
reviewed by: Lee Vincent.
Artists:
Ulrich Schnauss & Mark Peters
Record Title:
Underrated Silence.
Record Label: Bureau B.
Buy It: Boomkat.
There is not a single song in Ulrich Schnauss's discography that doesn't hint to some sense of underlying nostalgia. Looking all the way back even to his debut Far Away Trains Passing By, every track of his seems to be dipped in shoegaze haze and then underpinned by beats reminiscent of groups like The Black Dog and Tangerine Dream. Yet somehow by transporting shoegaze's ethereal qualities into the breadth only electronics can provide, his music escapes from sounding like a mere ghost from the past. Ulrich Schnauss' work has always been unique and otherworldly, and this fact alone is what has propelled him to be one of today's most important ambient producers.

On his latest release, Underrated Silence, the master of electronic shoegaze pairs up with Engineers guitarist, Mark Peters. Though they have worked together for years (Schnauss plays the keyboards alongside Peters in Engineers), this album marks the first time the pair has released a work on their own. And right from the beginning, once the guitars and gloss of “The Messiah Is Falling” swoop you in, you know you're in for something completely different.
What arguably makes this album so different, at least in comparison to the two artists' past works, is its fusion of acoustic and electronic elements. At first you get the feeling this intriguing mixture is just them showcasing their diverse talents, but Peter and Schnauss seem to know how to keep their sounds tamed – most of the time. “Forgotten” is one example that represents this integration well, though it's quite light on the acoustics. We hear what sounds like the airy guitar of Cocteau Twins's Robin Guthrie and the falsetto vocals of Lush's Miki Berenyi. But this is far from the shoegaze your dad listened to. Imagine a Slowdive song stripped to its core and stretched to its breaking point, layered with a hint of sappy IDM, and you've got “Forgotten.”
The next track in question seems like the pair are directly nodding to Mum's Yesterday Is Dramatic, Today Is Okay. With the same brand of shuffling beats and twinkling music-box melodies that made the 2000 album so memorable – as well as an acoustic guitar hidden low in the mix – “Yesterday Didn't Exist” is possibly Underrated Silence's most stunning track.
Like I said before, all the complexities of this album are quite amazing – most of the time. The few low points scattered across this album come from when the stylistic syntheses only comes off as a confusing textural friction. Take “Rosen I'm Asphalt” for example. The song begins with Schnauss churning out some filtered percussion and New Wave-style electronics. But as Peters enters with his guitar bends, though they first act as a kind of interesting rhythmic pendulum, the song eventually turns into a chaotic wall of sound. This aftertaste of confusion is also present on “Gift Horse's Mouth,” where a drawn-out guitar phrase tries to sneak into Schnauss's most complex production on the album. Adding a guitar to layers of drowned-out blips, plangent synths, and crunchy drum machines: really?

Don't take me wrong. This album's still worthy of repeated listening despite its few weaknesses. In fact, let me end this review by shedding light on what I view to be the album's main theme: underrated silence. The meaning behind this title is quite cryptic, but it arguably plays a fundamental role in developing these ten songs. What Peters and Schnauss are insinuating here is not the beauty of total silence itself; they are merely talking about an inner quiet in the hope to remark upon and embrace those around you. And after all, this album is nothing but a portrayal of this idea. Underrated Silence blends the visions of two ambitious artists into one often beautiful experience, reminding us we don't have to be in a strangely isolated place to make music worth hearing.
Posted by When The Sun Hits - All things shoegaze. at 5:00 PM