Album Review: Windy & Carl. We Will Always Be. 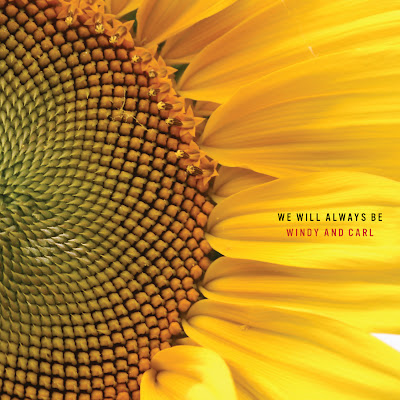 Album Review by Lee,
Guest Writer
Over two decades have passed, but Windy & Carl still reign as one of the ambient scene's leading stars. The duo's career arose in the early nineties out of shoegaze's golden age and of Michigan's humble origins as a space rock oasis. But despite being linked to such a collective period, Windy & Carl emerged from the hype with a sound all their own. No band has yet to match their shivering, glittering guitars; no band probably ever will. Because in the sixteen years since their debut, Portals, the couple's vision has not changed. It has only evolved within itself, exploring its peripherals, constantly self reflecting.

From the first moments of their eighth album, We Will Always Be, the couple's maturity resonates loud and clear. The whirlwind of a song, “For Rosa,” opens with bands of static lost in a decayed hiss, out of which emerges the strumming of an acoustic guitar. This fusion of the natural and otherworldly continues with “Remember” . A glistening guitar carries out a droning riff, while Windy's spectral voice guides the song into a realm of pure beauty. However, no track displays the couple's abilities more than “Nature of Memory.” It opens with a tide of delay, over which a wavering, pulsing bass surfaces. As more and more layers of guitars unravel, a spoken word segment by Windy begins. Cryptic lines like “Trees with a story, there is sound,” alongside clicks of telephones and other bizarre noises, give the song a strange feeling. You imagine some familiar place – a field blanketed in snow, a lake shielded in ice – but the electronics and processed guitars keep you levitated in some heavenly dimension. It's this paradox which defines the duo's work, and reveals them at an artistic peak few reach.

A couple of months ago, Windy & Carl posted on Facebook that the driving force behind their musical explorations is how: “Together we have a world no one else really knows... And of course, at the heart of it all, is music. Making music. Creating this other world.” Listening to their newest release, this sentimentality shines brighter than ever. The album's artwork, lyrics, and strangely organic tones all have their place. Just view the theme of nature's eternality as a platform for the couple's boundless expression of their love, and the album echos with new found meaning. Nature will always be; we will always be.

While We Will Always Be pays tribute to the flowers of their relationship, Windy & Carl's ethereal and loose songwriting leaves space for a universally personal experience. Their work demands so little from the listener – something which constantly amazes me about their work. You can keep yourself grounded, letting the sounds flow into the background. It can be the soundtrack for your morning commute, it can open the door to your daydreams. But if you dare to stick your head into the clouds, breath in every note and sound, a world of surreal beauty and subtle complexities will reel you in, releasing a host of angels onto this earthly plane.