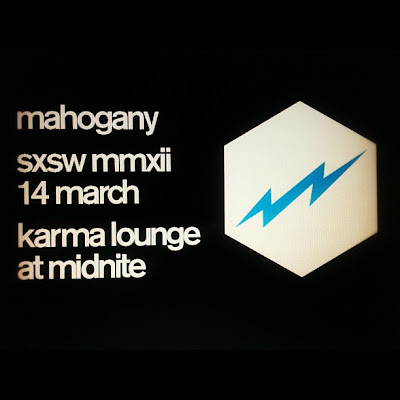 MAHOGANY at SXSW:
MIDNIGHT KARMA
Working in Chicago & New York, MAHOGANY takes a break from filming and mixing to play select shows for SXSW, in support of their long-awaited EP, Electric Prisms.

Spotted by city style blogs and signed by Chicago label BLVD Records, the band makes a special appearance at SCHUBAS on February 29th at 9 PM.


At the Austin festival, Mahogany plays the SXSW Official Showcase at Karma Lounge on March 14th at midnight. The ladies of Mahogany will be outfitted by Brooklyn line, TuTu and BeTz. Don't miss Mahogany as they take part in a runway presentation for Style X on March 16th.

The band has announced a 'slow reveal' of forthcoming material and events —
Connect with Mahogany on:
YouTube, Twitter, Instagram (Mahogany_Band) and Facebook to keep abreast of the latest.
Posted by When The Sun Hits - All things shoegaze. at 4:00 PM