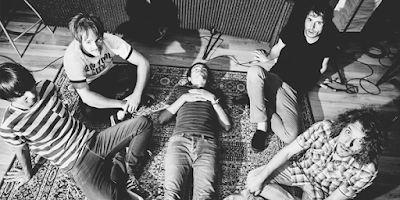 "Pinkman" is the second single-and-video put out in advance of The Mean Solar Times, which will be Stay's fifth full-length album. Picture In My Ear records has just announced a release date of February 10th, 2016 and made pre-orders available here.

Like the preceding single "Smiling Faces," which we posted here, "Pinkman" features contributions on  guitar from Andy Bell of Ride (he also played bass with Oasis). The album is produced by Owen Morris, whose credits include Oasis, The Verve, and Ash.

A detailed biography of Stay, who are based in Barcelona, Spain, is offered on ReverbNation.

Posted by When The Sun Hits - All things shoegaze. at 7:17 PM