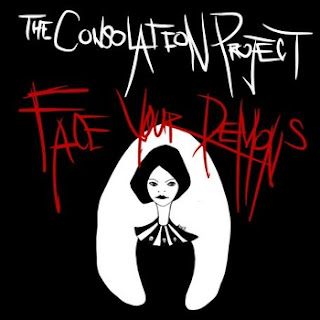 It's been a few months since we last spoke of Ron Cavagnaro's solo vehicle The Consolation Project, but that doesn't mean Ron hasn't been busy! A few weeks ago, he released his 15th full length album of 2011 - no shit (it's the 16th LP since December 2010) - and it's entitled Face Your Demons. This is the first time since Glaciers (the album that originally got me hooked on band) that TCP has released something truly brand new, and it's top shelf, as always! You can go to The Consolation Project's bandcamp page to stream it (and it's 15 predecessors) for free, and then shell out the meager $10 for your own copy. Support independent artists! Cover art (above left) by Allie Hartley and Ron Cavagnaro. Read Ron's brief press release statement about the new LP below:

The Consolation Project PROUDLY presents the NEW album FACE YOUR DEMONS. It has been over a year that I had been working on making something new since "Glaciers". MAKE IT YOUR NEW SOUNDTRACK FOR THIS BEAUTIFUL AUTUMN SEASON! Free to listen, $10 to support and own your digital copy.