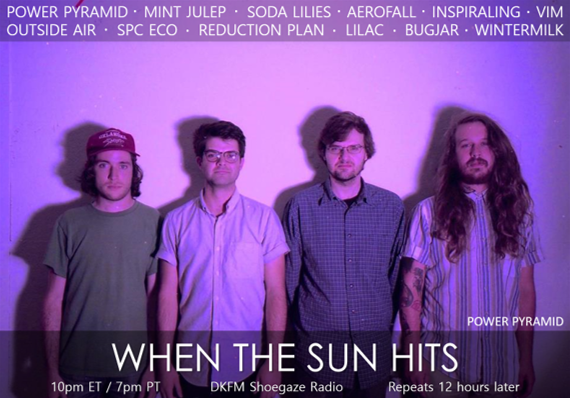 Repeats 12 hours later!
Posted by When The Sun Hits - All things shoegaze. at 8:34 PM 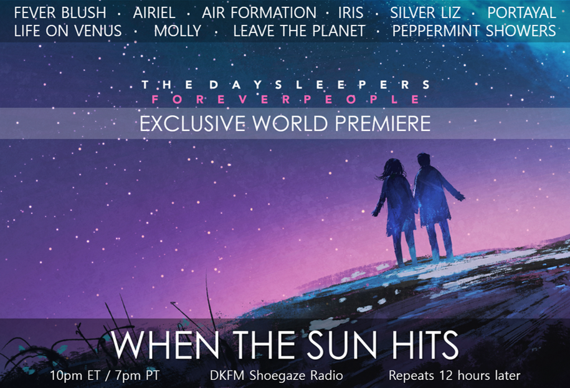 Stream it live
10pm ET/9pm CT/7pm PT
decayfm.com
Posted by When The Sun Hits - All things shoegaze. at 8:26 PM

Flower Crown is the Pittsburgh-based dream pop duo Richie Colosimo and Aaron Mook. The band released their stellar debut LP, GLOW, in October and we’ve had it in constant rotation ever since. GLOW’s lilting melodies, dreamy textures, and hypnotic guitar tones are gorgeously balanced and anchored by the duo’s firm grasp on how to write a great pop song. The album has been one of 2017’s surprise discoveries, pulling us back to it again and again.

If you haven’t heard GLOW yet, you’re doing yourself a disservice. Don’t make your Best LPs of 2017 list without first hearing Flower Crown’s offering. You’ll no doubt discover it deserves a place with the elite.

We hope you enjoy getting to know Richie and Aaron in the interview below. Many thanks to them for taking the time to answer our questions.

How and when was the band formed?
A: Richie and I met at a Halloween show that his other band, Frame and Mantle, was playing in 2015. We started talking about writing songs together while I was selling merch for them on tour. The first demo he sent me was for “Tequila Mockingbird,” a bonus track on our EP, Hypnausea, and then we recorded the first Flower Crown song together (“John Cusack”) in his home venue/studio, Conjunction Junction.
R: RIP, Conjunction Junction.
Can you tell us what the band has been working on and what you've got forthcoming in the near future (any new releases, tour, etc.)?
A: Seeing as GLOW just came out last month, we've mostly been focusing on trying to do more press for that. But we've tossed around the idea of doing an EP of instrumental demos and B-sides. I keep everything we record and have a decent amount of alternate takes and unused instrumentals for GLOW, as well as friends who are interested in remixing the songs.

R: As far as touring goes, live shows are kind of tough as we're a duo and have to teach our friends (members of Frame and Mantle and Wave Trails) the new songs. I'm not sure if we anticipated playing in support of GLOW, but we also didn't anticipate people being so gracious about the album, streaming it, buying tapes and CDs, etc. So we might be looking at a few 2018 shows with our labelmates, The You Suck Flying Circus. 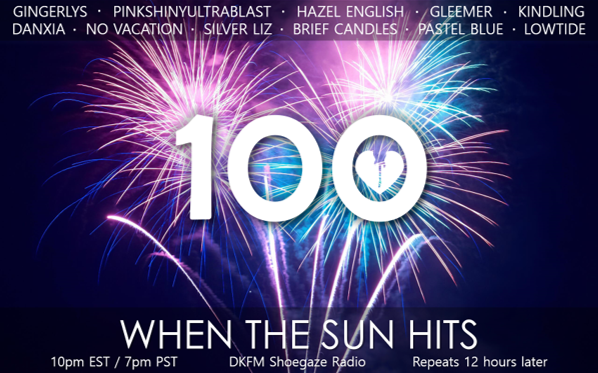 TONIGHT!
The 100th installment of WTSH on DKFM is happening!

Posted by When The Sun Hits - All things shoegaze. at 8:49 PM

No release of the past year has struck a more powerful emotional chord with us than highandfragile’s debut outing, an EP called I Was Not Well. The four track digital version was put out by the artist, Oakland’s Breannyn deLongis, in the closing days of 2016. She followed up with a very limited cassette edition including a bonus track this past June. The EP features drums by Adam Jennings and production and backing vocals from Kristina Esfandiari of San Francisco’s King Woman.

Some might chatacterize I Was Not Well as dark or negative. There is plenty of angst here, and not every moment of the EP is easy to listen to. For us, however, the sound of Breannyn bravely making art out of a woundedness and vulnerability that we connect with is glorious and, in its own way, uplifting. There have been days when we’ve listened to I Was Not Well over and over, finding each passage through this set of songs thrilling and somehow different from the others.

Rare is music so whole and powerful that it doesn’t so much stimulate this or that feeling as it magnifies the underlying capacity to feel altogether. Hearing music of this kind, we feel anything and everything; we get the sense we are experiencing the full spectrum of emotion, joy and sadness and anger and more, all at once. While feeling so fully can be overwhelming, it is also healing and relieving.

For us, highandfragile is this rare kind of music. We therefore feel especially privileged to present the following depthful interview, one of the most emotionally candid ones we’ve ever presented. Our gratitude goes out to Breannyn for the care and dedication that putting this piece together has required. We eagerly anticipate the upcoming releases that Breannyn describes at the close of the interview.

From our perspective it’s as if you’ve suddenly materialized with a powerful, singular sound and artistic voice already developed—but we realize that’s probably not very accurate. Could you fill us in a bit on your musical past and development?
I have been fighting being a "musician" for so long. My dad did sound for a touring grunge band when I was a baby so I wound up growing up around a bunch of band dudes with ripped jeans, long hair and drinking problems. I grew up watching them all lose their families, minds and whatever semblance of a life they had. By the time I could make "life decisions" I knew I loved music and words but I also knew that I desired the stability that I hadn’t witnessed as a child and concluded that being a musician did not coincide with my stable real world aspirations.

I was endlessly frustrated because I couldn’t focus long enough to sit and type or write out a story.  I could tell you a great story, but I didn’t have the patience to write it down for you. Adding a rhythmic and droning aspect like guitar helped coax the words out of me in a more natural and soothing way. At some point I couldn’t deny how important making music and art had become in my everyday life. I had to get over my fear of the future not working out because without being able to make music there was no possibility for a healthy future for me. Music and art slowly took over every part of my life and without them it’s hard to function. It’s a very hard process to explain but it has been lifelong. 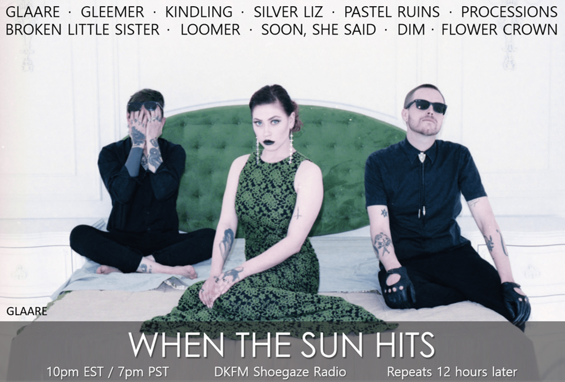 Kalamashoegazer 11: November 4th. BE THERE.

UPCOMING RELEASE: Rock Back: Stronger Than the Storm | a compilation in support of victims of Hurricane Harvey, Irma, and Maria.

Release date: Nov 7, 2017
Rock Back: Stronger Than The Storm


A compilation in support of victims of Hurricane Harvey, Irma, and Maria

Over 50 tracks from artists from all around the globe have contributed their music to Rock Back: Stronger than the storm Disaster Relief Compilation to be released on Patetico Recordings.

The concept of the Rock Back compilation series was born in 2011 when disaster hit Japan and Tom Lugo, Patetico Recordings’ label owner who is very passionate about helping causes and non-profit organizations, decided to reach out to the community of artists he has in his network to put together a compilation with profits being donated to relief efforts. The response was overwhelming, over 100 artists all over the world joined to together in the efforts. What was to be a single CD compilation grew to an 8 disc compilation titled “Rock Back for Japan”. 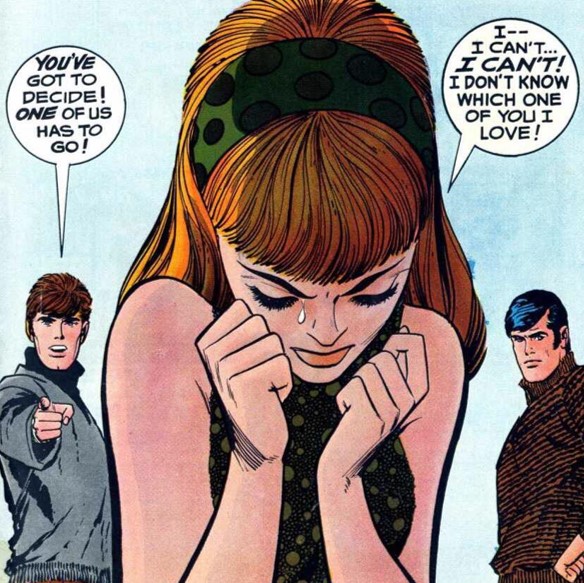 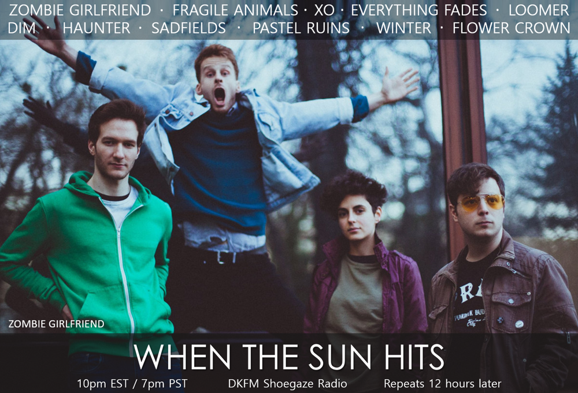 Repeats 12 hours later!
Posted by When The Sun Hits - All things shoegaze. at 2:30 PM

The Morelings are the Philadelphia-based dream pop duo of Kedra Caroline and Matthew William. The pair just released their absolutely gorgeous debut LP, Same Century, on September 26 and frankly, we’re obsessed. We already knew and loved their No Sign EP, released in 2015, so we fully expected Same Century to be likewise excellent.

“Excellent”, however, is an understatement. The record is a perfectly crafted slice of bliss pop heaven. Many stylistic influences can be heard in their dynamic sound – 60s girl groups, early psychedelia, 80s and 90s dream pop, the softer side of synth pop, Disintegration-era production – but they never sound imitative or unoriginal. In fact, their unique blend of styles sounds nothing if not modern.

One of our best reviewers, Elizabeth Klisiewicz, recently reviewed Same Century for our friends over at The Big Takeover, and she perfectly states our feelings with her typical aplomb and flair for finding just the right phrase. Head over there and read it!

We are very happy to share the following interview with you. Do check out Same Century – it will no doubt be one of the crowning jewels in our Best of 2017 list.

How and when was the band formed?
The band formed when Kedra and I began writing songs together, which was approximately 4 years ago.

Can you tell us what the band has been working on and what you've got forthcoming in the near future (any new releases, tour, etc.)?
We’re currently writing songs for a new album, which we’ll begin recording soon. We’re super excited. Our sound has evolved a lot with the current configuration of our band. We’ve also been playing shows to support the release of our debut LP Same Century, which came out at the end of September. Our next show is in Philly in early December. We’ll also be releasing another video from the album soon.