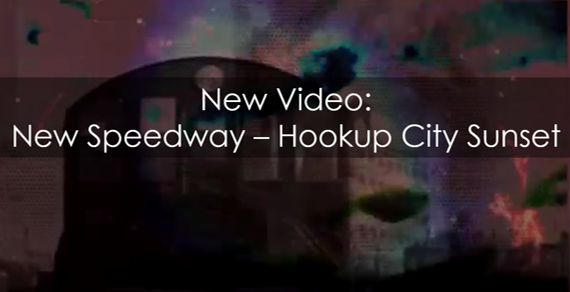 “Hookup City Sunset” is taken from Philly-based New Speedway's recently released fourth album, Behavior: Ceremony, which you can and should obtain right here. The video, made by Jonathan Allen (aka Jonathan Mono) of Music for Headphones and Daydream Machine, is the perfect backdrop for this catchy fuzz pop tune.

Posted by When The Sun Hits - All things shoegaze. at 4:30 PM 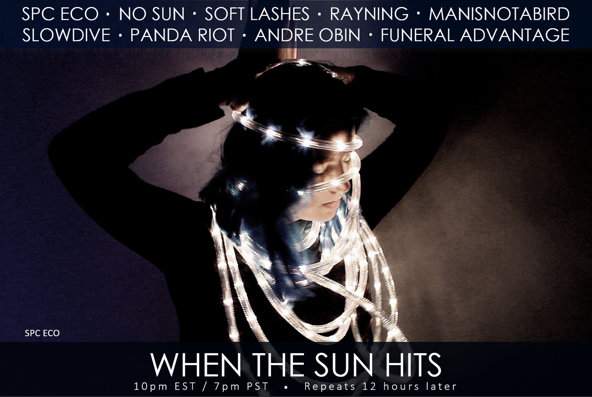 TONIGHT!
Regularly scheduled programming returns with a new episode of WTSH on DKFM! Don't forget to stick around for Muso Asia, which will immediately follow WTSH. Repeats 12 hours later! 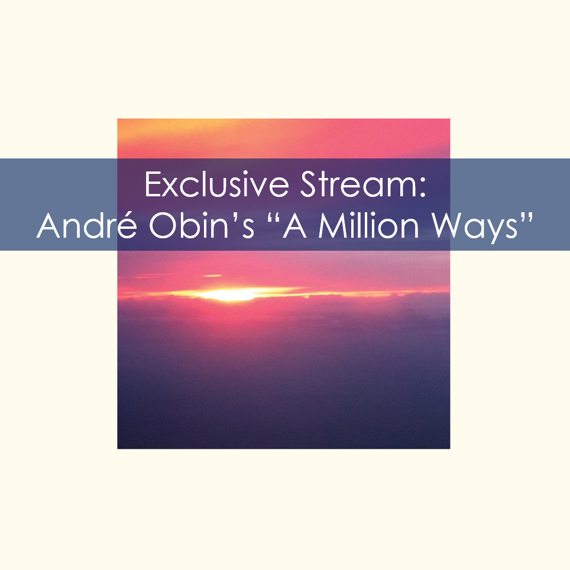 André Obin, a solo artist based in Cambridge, Massachussetts, has been a fixture in the music scene since 2008. His music, which can be described as a sparkling hybrid of ambient, synth pop and shoegaze soundscapes, is in quite a league of its own -- and always has been. “A Million Ways” is taken from Obin’s forthcoming LP, Warm Winter, which is set for release on January 27. The album was mixed by the one and only Mark Gardener, and he also appears on a few of the tracks.

Obin has shared “A Million Ways” exclusively with WTSH and we’re very proud to share a stream of this hypnotic, dreamy song with the world. Tune in to WTSH on DKFM this evening to hear a special airing of the song, as well. Enjoy!

Obin recently released a brand new (and lovely) video for the album single “Solarium” – you can watch that below. 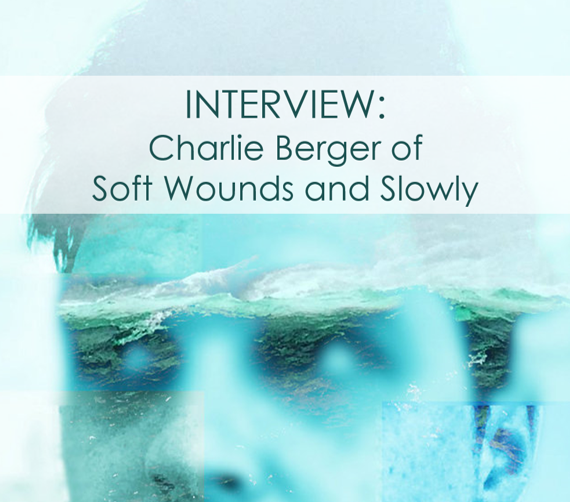 Charlie Berger is the frontman of Soft Wounds, a Toronto-based jangle-gaze band that made a major splash in early 2016 upon the release of their excellent self-titled debut LP. (This record topped many “Best of 2016” lists recently -- including ours) He also releases music via his solo project, Slowly, which is just as sonically impressive as Soft Wounds. The combined musical efforts of these projects soundtracked the entirety of 2016 for me, so I am naturally thrilled to share with the world the following interview with the brilliant Mr. Berger.

How and when was Soft Wounds formed? First, I just want to say thank you so much for the opportunity to speak about my projects. Smaller, independent artists like myself would not be able to reach as wide an audience without the hard work of talented music bloggers and radio/podcast hosts like you! I am flattered that you wanted to take the time to get to know more about my projects and myself. I’m also a fan of your blog and radio show, and I have discovered so much awesome music through them, so thank you so much for all you do!

So, let’s see...Soft Wounds was initiated in the spring of 2014 by me (Charlie). I had been the vocalist in many projects/bands prior, but wanted to take a stab at adding guitar, which I had only previously done for home recording projects and never in a live setting. I had the idea to form a new project that would draw from the sounds I’ve always loved (shoegaze, dream pop, post rock, slowcore, etc.), as I had not yet had the chance to explore those genres in a band that played live. From being in a lot of different bands over the years, I know a lot of musicians, but at the time, I didn’t know of many who weren’t already involved in their own shoegaze-ish band and interested in starting something new. So, I did what most people do when they are looking to connect with likeminded individuals who align with their ‘alternative’ (music) lifestyles, I posted on Craigslist. :P

Through craigslist, I met Matt, an amazing guitarist/vocalist/songwriter, and a recent transplant to Toronto from Australia. He was keen on the idea and also a big fan of shoegaze and dream pop. Matt had his own solo project and had played in several bands in his native Hobart, Tasmania. We met up a couple of times and things clicked right away. Along the way, we also met Andrew, a ‘living shoegaze encyclopedia’ of a bass player, who brought a unique style to the mix. Together (with our first drummer, Geordie who we picked up along the way, who was then replaced by Jimmy), we started to write what would become the basis for Soft Wounds first demo and eventual first studio release (released back in January 2016). The rest, as they say, is history?

What prompted you to begin your solo project, Slowly, earlier this year? At the time (Spring 2016), Soft Wounds was going through some lineup changes (a couple members left the band abruptly), so while we were getting new members up to speed on the previously-written material, Soft Wounds put songwriting on hold for a few months. I had a whole lot of new material that had built up over that time (I’m always working on new music at home), so I started to record the ideas I was writing at home in my spare time (mostly to not forget them). I had previously done some solo recording on another solo effort a few years back; and I had always found it a lot of fun and a challenge to write and record every part of the song myself (bass, guitar, vocals, drums, etc.). I started to realize that I had much more material than I could possibly release with Soft Wounds, so I decided flesh some of them out and turn them into material for a new solo project (which I called ‘Slowly’) and release them myself in an ongoing fashion online.

The sound of Slowly is slightly different from Soft Wounds in the sense that it’s all me. In Soft Wounds, one member may be more responsible for writing the foundation of a given song, but always in collaboration with the other members, so things can morph and change as each of us brings our own unique styles and ideas to the table. I guess you could say that Slowly is what Soft Wounds would probably sound like if you cloned me 3 times and I started up a band with those clones (which is a great idea for a movie, BTW…they could call it something like ‘Clone Band’ or ‘Band of Clones’...I dunno, we’ll let the suits in Hollywood figure that part out…). 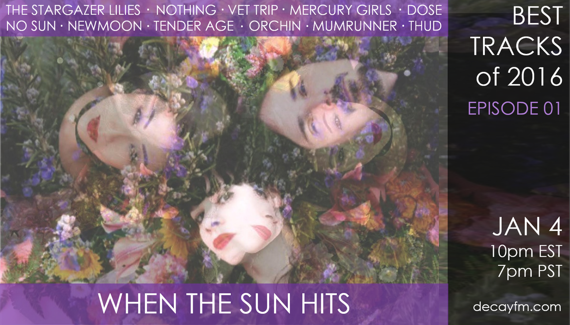 To be immediately followed by MUSO ASIA's Best of 2016 show, so double HOLY CRAP. Don't miss these shows! But if you do miss them, they repeat 12 hours later, because we love you.
Posted by When The Sun Hits - All things shoegaze. at 3:27 PM 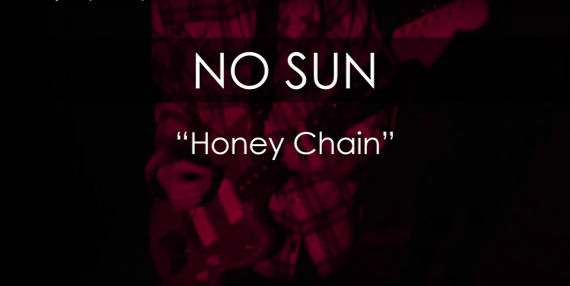 No Sun is 4-piece project based in Salt Lake City, UT. “Honey Chain” is the third song made public by the band from their forthcoming debut LP, If Only, which comes out on January 20, 2017. To accompany the song, they’ve made their first video, which you can watch below.

In the video, compelling imagery, shadowy figures, blurred visuals and momentary flashes of silhouettes are all knitted together and bathed in an eerie red light, to great effect. The concept is simple yet impactful. The song itself features more of what we’ve already come to expect from this group – an anthemic shoegaze sound, huge-sounding drums (very reminiscent of early Ride), trippy guitar lines and smooth, languid vocals. It’s sonically gripping, with an unsettling undercurrent that we can’t quite put our fingers on. Whatever it is, we’re into it. Massively.

Pre-order If Only here.

Posted by When The Sun Hits - All things shoegaze. at 2:59 PM