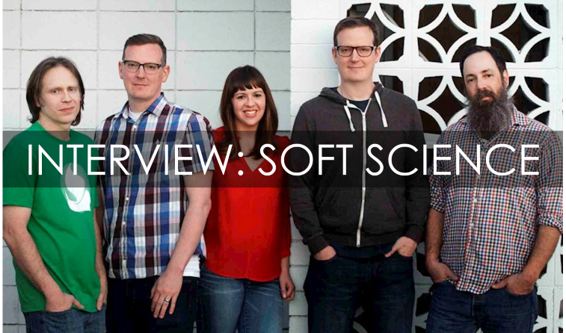 The excellent dream gazers from Sacramento, Soft Science, are at it again, and are releasing their third full length album called Maps on June 1st. It’s not an abrupt departure from earlier outings, but it’s immediately striking for its crystal clear sound as well as a more nuanced approach to their art. In listening through to Maps as I write this, I am struck by some sonic similarities to unexpected groups. For example, the enchanting “Sooner” takes a leaf from the Single Gun Theory playbook, at least initially. The group has a penchant for swooning, expansive soundscapes, expertly played and helmed by the sweet, sultry vocals of the band’s friendly singer, Katie Haley. I was lucky to meet her at the 2016 NYC Popfest, though I didn’t get to see them play. The band is well beloved by fans of shoegaze, dream pop, and even psych, for there’s no denying the atmospheric and occasionally spacey vibe that runs through their music. Katie and keyboardist Ross Levine were kind enough to answer my questions. Thanks also to Amber Crain and Shauna McLarnon for all that you do. -- Elizabeth Klisiewicz

In your childhood, who influenced you the most musically? Were there family members who played instruments or introduced you to great music?
Katie: My Mom sang, never in a band, but in choirs, and my Dad was really into music. He primarily liked 50s, 60s, and 70s pop, jazz, soul, and country. My Mom was really into 40s big band music. Between the two of them several decades of music were pretty much covered as there was music playing in the house at least at some point every day. I feel very thankful for getting exposed to a lot of music early on. I started singing in school choirs when I was about 10 years old. In my early teens, my older brother John (John Conley, Desario – Graphic Designer, BlkBrix) had the biggest influence on my developing taste in music. We would watch 120 Minutes on MTV and then proceed to the record store together to find stuff we liked. Starting in the 1990s John and I got really into bands on indie labels like 4AD, Teen Beat, and Sarah Records. The music seeking basically has just continued and I still love finding out about new music that speaks to me.

Ross:  There were a few Gordon Lightfoot and Jim Croce 8 tracks around, but my parents didn't really listen to too much music.  Matt and I really got most our early musical exposure from going through our older brother's record collection.  He had all kinds of good stuff for a solid foundation like Ramones, Sex Pistols, P.I.L, Depeche Mode, Jesus & the Mary Chain, R.E.M. and Love and Rockets. Also, like Katie, 120 Minutes was huge for us as well. From junior high on we had a turntable in our garage and the neighborhood kids would come over and we'd all play records, mostly punk rock. My introduction to "shoegaze" came when a friend of mine recommended that I go to a show with two bands that I had to that point never heard of that were touring together, Ride and Lush. I still consider that show one of the best I've ever seen, it made a huge impression on me.

When did you start thinking about joining or starting a band? How did the members of Soft Science come together?
Katie: Well…I have been friends with Matt and Ross for a long time. Ross and I worked at a record store in Sacramento, CA, called The Beat, while we were both in college. This is where we met and became friends. We were all in different bands at that time but would go see each other’s bands play and hangout. Side note - I actually met my husband through Matt and Ross. Eventually, we were all in a band together called the California Oranges which also included my brother John, and Verna Brock (Rocketship/Beanpole). John, Verna, and Ross were actually the original members of that band; Matt and I joined later. After California Oranges broke up, Matt, Ross, and I decided we were not done playing music and wanted to form another band. Ross had been playing in a side band with Mason (our bass player) and asked him to join us. Soft Science was the 4 of us for a couple years with Ross on drums. After Detour came out, we asked Tony Cale (English Singles) to join us on drums and Ross moved to keyboards. That is probably the least complicated summary of our journey I have ever managed to come up with! Too funny.

Can you describe the recording and song creation of the new album as compared to your earlier work?
Ross: We definitely have a clearer vision of our sound than we used to, which helps to better know which songs to work on and which to ditch. I also have been making more fleshed out demos so when we work on the song as a band we can hit the ground running.  Every once in a while we'll work up an idea from scratch at practice, but it's tough for us because we don't practice enough. We actually practiced last night and Katie called it a "Soft Science miracle".

We self-recorded Detour in Matt's basement and it came out great considering we didn't know what we were doing. But Maps is the first record we've done since Tony, who is an experienced engineer, joined the band and he made a huge difference.  We tracked most of record at a nice studio (Prairie Sun in Cotati, CA) and Tony ended up mixing it and really took it to the next level.

Katie: Ross covered the nuts and bolts but to add, this time around we actually felt a bit of pressure that we had not really experienced before. Detour was better received than we anticipated, which we still are thrilled about. We knew that our next album had to raise the bar or at least be just as solid. Frankly, this made the process a little more difficult especially since our producer and engineer (Ross and Tony) are in the band. It’s really hard when you are that close to a project like this to tell if its good, needs something else, a tweak, or perhaps you are the one tweaking out because you are too damn close to it. A few times along the way we had to take a break; take a few steps back to move forward. We learned a great deal along the way and in the end refined our process. The latest song we recorded and mixed was the NPL cover of ‘Paris’ which we managed to knock out in about a week. This too was a “Soft Science miracle” (ha, ha). I want to enjoy Maps being done and going out into the world soon so I am not quite ready to move on thinking about the next go around. But I feel hopeful that at least our lessons learned on Maps will pay off for us in the long run.