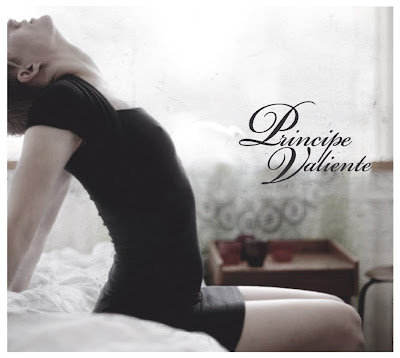 Stream it or Buy it on Bandcamp

Over the past month or so, there's been a lot of talking, voting and writing about 'the best releases of 2011' in music communities everywhere online. And lots of really great albums were released over the past year, indeed. However, the self-titled debut album by the Stockholm based Swedish band Principe Valiente would most definitely stand as a completely obvious favorite on my own list, had I made one. The album was released October 2011 on the German label afmusic.

The entire album feels like being thrown into some violently roaring river, caught by the currents and taken along for the ride! There's no way of fighting against this force, neither would I ever want to - this is white-river-white-noise-rafting at it's very best, and after the little soft piano intro opening the album, the second track “Before You Knew Me” gives the listener a pretty good hint of where we're going! And indeed, there was a time before, and after, getting to know Principe Valiente! Finding myself caught up in and hooked on the powers of this album, “Leave Them All Behind”, as another song is called, doesn't even seem too much of an ambition for this band.

“In Your Arms” is a literal outburst of high-flying post-punk amazingness, and the peak at 2:47 in this song simply never fails giving me goosebumps all over. Pure bliss and euphoria!

Willingly trusting the post-punk-powers of Principe Valiente, I'm inevitably taken further and further down the raging stream, through the whirlpools, deeper, darker - and so high. There are so many layers in this sound, overwhelmingly overlapping one another, and yet the most beautiful dark light seems to be shining through at all times.

Mid-album I'm given a brief chance to catch a short, calm breath of air, head above surface for a second in the eye of the whirlpool, before I'm once again hectically dragged along by the most powerful forces of breathtaking beautiful noise. Being beaten up by the beat, brain burst and soaked in sound, I must say that this is definitely one of the most amazing rivers I ever drowned in!

I know this album was only released back in October 2011, which necessarily has to mean it's no more than three months old now – but it's already so much of a classic to me. I'm very pleased knowing Principe Valiente seem to be reaching far and beyond and out to so much more than just a Scandinavian audience, and it's really nice knowing they're being played regularly at fx. the awesome Shimmer club in Chicago, and that the music video for “The Night" has been rotating on German television. Very well deserved indeed!

On the Principe Valiente bandcamp we're informed that “Their sound may partly be the result of a variety of elements inspired by the minimalism of certain post punk acts and the lushness of shoegaze, but is primarily characterized by an ambition to break new sonic ground. This combination of innovative and inspired material makes for an invigorating listen as it is difficult to pinpoint in regard to genre.”

And I have to agree, especially since it's often a very individual exactly what people read into specific genre words, why they're easily simplifying great music. However, I'll take my chances on calling this 'shoegazy post-punk', and should I compare Principe Valiente's sound to the sound of others, I'd mention bands such as fx. The KVB, Sisters of Mercy, Bahnhof and Fjord Rowboat – and more than once reaching the dizzying hights of amazingly desperate Death by kite-ish guitars! Indeed, I must say I agree on the 'breaking new sonic sound' – even though all music more or less necessarily comes from somewhere and the fact that we're all receiving tons of impacts all the time just by being around and alive, this album's most definitely adding something new and fabulous to the scene, and realize I really need to get a physical copy of this album – just to possess it, you know. And though I'm indeed Dancing Like There's No Tomorrow while listening to this stunning album, in the same time I'm also impatiently awaiting many more dazzling releases from Principe Valiente in the years to come!

Posted by When The Sun Hits - All things shoegaze. at 6:09 PM