Interview: Jimmy Rossi Jr. of the December Sound and Avoxblue. 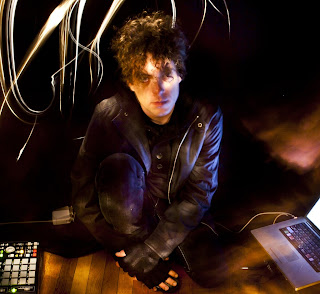 When The Sun Hits Interviews
Jimmy Rossi Jr. of
The December Sound and Avoxblue.

I first learned of Jimmy Rossi Jr. when I became a fan of The December Sound around 5 years ago. The December Sound's music is best described as dark and extreme - melting guitars, dangerous songwriting, evil drones, hypnotic bass lines, maniacally distorted beats, heavily effected/detached vocals, otherworldly soundscapes...you get the picture. It's rad. Jimmy Rossi Jr. recreates the DS's vicious soundscapes, dreamy keyboards and melodic guitar that so drew me to the band in the first place. After learning that he had begun a solo project, I understandably got pretty excited. And when I heard Avoxblue for the first time, I got seriously excited.

Avoxblue's dreamy soundscapes are rooted in a synth-heavy new wave foundation, and the songs unfold themselves with experimental beats, otherworldly echoes, and dark textures. Plenty of reverb and distortion make up Avoxblue's electronic wall of sound. This solo project is nothing short of stunning; A Place Without Time is hands down one of the best things I've heard this year (and I've heard a whole hell of a lot). When The Sun Hits is proud to feature the following interview with Jimmy Rossi Jr., and we highly recommend you check out Avoxblue's Bandcamp page to make many purchases because, if I may speak frankly, Jimmy Rossi Jr. is fucking awesome and you need to be all over this. RIGHT NOW.