Preston Maddox of Bloody Knives Lists His Top 2's of 2012.

Rootsta-farians with fake ass bullshit Celtic accents faking the folk. Dude gets a banjo and adopts a road weary persona like he just lived through the Irish potato famine. Band name sounds like the name of a Mormon bakery. These guys are so full of shit they might as well call themselves the Colostomy Bags. 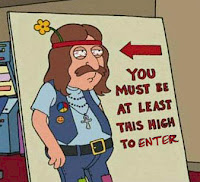 This guy told the media he camped out in the woods and found his hippie spirit or some dumb shit like that. That was the secret to the success of his record, that he drew artistic power from Mother Nature herself, that the muse of nature spoke to him and through him.

Did his hippie spirit tell him how to use electronic synthesizers and sound like Phil Collins??

He must have heard the spirits of Phil Collins and Peter Gabriel whispering in the winds. That is the only way he could have rediscovered dramatic 80's arena-pop through the whistling of the wind, the rustling of the leaves, the trickle of water through the stream, the essence of nature that is embodied in synthetic keyboard music.

This is a classic piece of cinema history. This is also Jean Claude Van Damme's first movie.

In short, Rocky 3 + The Karate Kid + Bruceploitation = NO RETREAT NO SURRENDER. 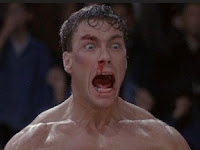 runs off to an abandoned house. Out of the darkness comes a glowing light and the spirit of none other than Bruce Lee himself shows up to teach him how to beat the shit out of former ballerina Jean Claude Van Damme.

I want to wander out to an abandoned house and hope the spirit of Cliff Burton will show up and teach me how to be a bass master.


This is a horror film from 1981 about a couple's disintegrating relationship. It is one surreal "what the fuck?" moment after another until the end, which both provides both a sense of closure and a lingering impression that keeps the movie with you long after the initial viewing.


This sounds like a "mature" record for them, and by mature I mean better from experience like a touring band, not lame and old like U2. Some of their fans whined about this while simultaneously praising it, a clear indicator of how good it is. 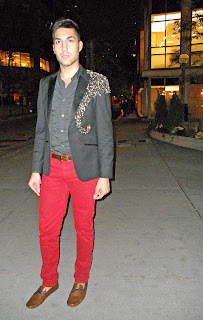 Are these your sexxxy-pants? Is red your power-color? Put those sassy-pants on!! U GO GURLFRIEND!!!!

Seriously. This isn't Nam Walter, there are rules.

Austin and Brooklyn are going to run out of bowler hats if they keep recruiting hippies to pick up the washboard and join the band.

These "HEY" choruses are getting out of control. I think we may need to quarantine hippies. I've been hoping for an excuse.


Then: Of Monsters and Men:
Of course we could always attack the root of the disease, as this actually started with Arcade Fire a few short years back.

It almost sounds like they all sampled the same "HEY" and traded it amongst themselves...


VIDEO OF THE YEAR


There is more Illuminati imagery in this video than in a David Icke novel.

Whoever thought that up needs to direct my bands videos.