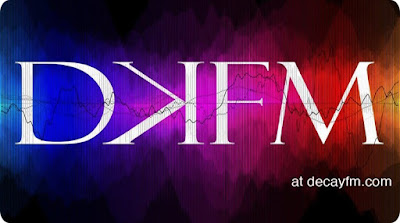 Greg Wilson is the creative and charismatic genius behind DKFM Shoegaze Radio, which he founded in early 2012. Greg, fueled by his ceaseless passion for shoegaze and dream pop music, runs the station full time out of his home studio in sunny California. He is a tireless supporter of the genre, and his unwavering enthusiasm for it can be traced back to the early 90’s. DKFM has been on our radar since its inception – when we heard that a free, 24/7 streaming internet radio station dedicated ENTIRELY to shoegaze and dream pop music had just been launched, you can imagine our collective enthusiasm. DKFM did not disappoint! We have been absolute devotees ever since. Today the station is hands down one of the most significant and dynamic resources available for the genre and its community – an outright treasure. Greg is one of those special few out there with the drive, determination and devotion it takes to spearhead the creation of something truly great – and with DKFM he has done exactly that.

We are overjoyed that the When The Sun Hits radio show has recently been added to DKFM’s weekly programming, and absolutely honored to be aligned with such first-rate brilliance. Onward and upward! 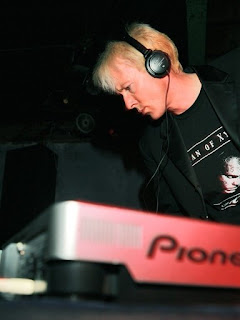 How did DKFM Shoegaze Radio get its start?
Oddly enough, in the rooms of turntable.fm, and specifically the shoegaze and dream pop room. As “cutting edge” as I thought I was, there were a number of folks who were super-sharp, and helped broaden my knowledge of uniquely awesome current materials bubbling up from the underground. It was where I first heard The December Sound, as well as the first single from an unknown (at the time) Italian band called Be Forest. I became convinced it was critically important to share this music with the maximum number of people possible, as there was really no radio outlet able to serve these needs on a large-scale basis. The niche created itself, and I wasn’t going to be satisfied until I saw it done, and distributed via iTunes and TuneIn Radio. Go big or go home.

Can you tell us a little bit about what's currently going on with DKFM, as well as plans for the immediate future?
Well, I’m super jazzed to be able to add When The Sun Hits to our program lineup. Years of hard work and good will went into building that particular radio brand, and it seemed a terrible shame that it simply went away. Up to now, I’d only pursued one other person to build a regular program, Matthew Bedford / Muso Asia, as I saw a specific need to promote the quality releases coming out of Japan and greater Asia, and to share them with a worldwide audience.

Immediate future plans? Year-end lists, coming up fast. One of the most wonderful AND stressful things I get to do around here, to celebrate the achievements of quality independent artists getting it done. The fear comes from overlooking something we’ll all regret later. Been there, done that, bought the t-shirt.

How do you choose the music that is put into the DKFM library?
Original material comes from direct submissions by artists and labels, supplemented with music purchased via Bandcamp and eMusic. New Tracks Weekend, we run all the newest material we get hands on (that fits format), so it’s sort of our proving ground. Regular weekday rotation is our “proven ground”, the tracks that get the most positive response from listeners via email, Twitter, and Live365 direct feedback. We’re also able to determine which tracks get “tuned out”, so it helps us determine what’s tracking with our audience. Plus, there are always some tracks in rotation that I just can’t live without, so you can pry them outta my cold, dead hands, but they’re not leaving our air.

What was your initial introduction to shoegaze music?
Easy. My Bloody Valentine - Tremolo EP. Even the US music press had caught the hype early, but it was a groundbreaker, a game changer. Building on a hybrid Cocteau Twins and Jesus & Mary Chain, and then taking the premise to another stratosphere? I was sold immediately. Even the transitions between songs said, “This is important. Pay attention, dammit!” (laughs)

Your ultimate top 5 shoegaze tracks?
I’ll amend that. Anyone can (and should) throw in My Bloody Valentine, Slowdive, Ride… I’d rather use this space to promote a few of the newer artists, who deserve all the credit for taking hold of the form, and bending it to their will.

Be Forest - “I Quit Girls (Japandroids Cover)”. For what was already a quality band, that they could break out something like this, and render the original totally unrecognizable, well, they shoulda got a medal. Probably my favorite song of the last decade, any genre.

Tatuki Seksu - “プリコグ (Shoegaze arrange)”. To take vocals from a cheesy Japanese pop-idol video game, and to turn that into a minor-key masterpiece? Even hearing it now, doesn’t seem possible. Thank Kensei Ogata for making the impossible, possible. Probably the one song I’ve spun more than any other. Utter madness, utter brilliance.

Miniatures - “Glass Box”. I can’t explain this. At all. First I heard it I was unsure of it. Second I heard it, I started to actively dislike it. I thought there were pitch issues, and it made me uncomfortable. Third time I heard it, it became a staple of my musical diet. It came at a challenging time for the band, as I understand it, and there have been lineup changes since then, but this is one of those songs that runs permanent rotation in my soul. Otherworldly.

Pink Playground - “Dark Bloom”. This one snuck up on me much the same way Miniatures’ “Glass Box” did. It’s kind of like trying to wake from a Lynchian nightmare, but you’re still stuck in a cough-syrup haze and can’t quite wake up. This is a beautiful, unique, but broken world of a song, and I like to visit often.

Tennis System - “Technicolour Blind”. The lads don’t get enough credit for writing great pop/rock songs, and turning them into hunks of twisted metal. I’d decided two years ago I was gonna make sure they get all the credit they’re rightfully due for putting a unique stamp on the form. Bloody torrid, that.

How do you feel about the ever-changing music scene currently? What do you think about free downloading?
Bandcamp and new distribution channels have helped “democratize” the music system, empowering artists and fans. Some will attempt to defend piracy, however, saying it gets made up in touring and merch sales. Knowing what tours cost, and what music creation/promotion/distribution costs, I can’t really see that as a defensible position.

How do you feel about the state of the music industry today? There is no doubt a massive change underway; how do you see it and do you feel it’s positive at all?
As I see it, the music “industry” is a good deal more free than it has ever been. Was a time, back in the day, when a major label would sign an established indie artist, and use proceeds from their record sales to offset what they’d contractually promised to Madonna, or Janet Jackson. Now artists have more direct channels to their fans, as well as a depth and breadth of independent music press to champion their output. Sometimes the only thing that limits a band’s growth potential is their eagerness to reach out to the indie press and radio. But I’d call it a net positive.

Do you prefer vinyl, CD, cassette tape or mp3 format when listening to music? Do you have any strong feelings toward any of them?
Grew up with vinyl, switched to CD, collected both in their time, still have most of it. I listen primarily to MP3 in the last five years, but I’ll still go out and support a touring band, and buy their vinyl that I will never listen to, only to get the cover signed by a band I have much respect for. Because I’m a n3rd. Thrilled to have signed vinyl from Cheatahs, Be Forest, Tender Age and Bellavista, among others.

What is your ultimate goal for DKFM Shoegaze Radio?
Focused on total world domination, really. Some in the music press have compared DKFM favorably to the major terrestrial radio powerhouses like KCRW and KEXP. I really am trying to level the playing field for this kind of music. Highly specialized, aggressively curated, rarely compromised. The current wave of reunions may well crash and burn in the next two years, but we’ll keep doing what we were doing before they began: believing in the transformative, magical power of this sound, and bringing it like it’s serious business.

What is your philosophy (on life), if any, that you live by?
Love what you do, do what you love. Go big or go home. Don’t be afraid to let your ‘weird' show: it’s a feature, not a bug. All of these things describe me, and are pretty firmly imprinted on the station identity. Keeps it fun and adventurous. Wouldn’t really have it any other way. 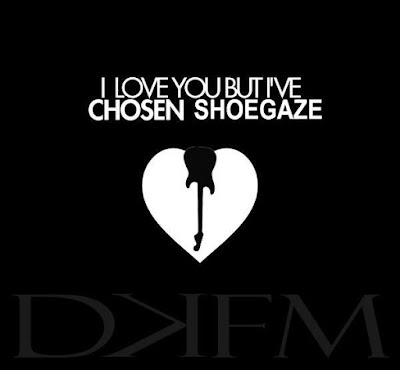