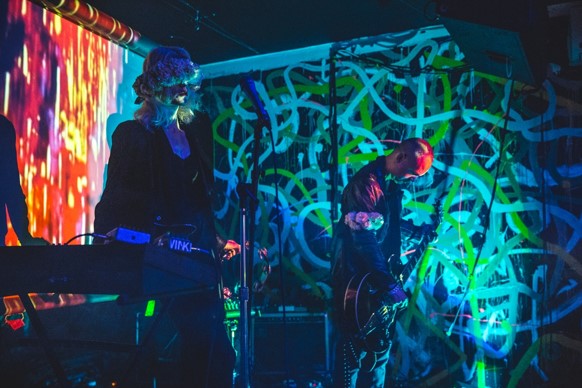 When The Sun Hits Interviews WINKIE

WINKIE is the Brooklyn-based duo Gina Spiteri-Santiago and Pter Santiago. The two weave a dark and distorted tapestry of sound that unnerves as much as it enthralls. Listening to WINKIE’s second full-length album, Come To My Party, is not unlike staring into the abyss. As you navigate the deftly crafted layers of reverb, industrial noise and frigid synths, you get the distinct feeling that the abyss is, in fact, staring back at you. WINKIE is unparalleled and one of the most noteworthy bands currently releasing music. If you like to lurk in the darker side of shoegaze, this music is for you. We couldn’t possibly recommend them more highly.

How and when was the band formed?
GINA: Pter and I have been working together on various musical endeavors for over 20 years. I don’t have an exact start date for WINKIE but it was probably around 2007. It started as a film scoring project that just evolved.
PTER: I’m terrible with dates (and names) but we were working on music for our friend’s short films Cassie and The Lesson.

Can you tell us what the band has been working on and what you've got forthcoming in the near future (new releases, tour, etc.)?
P: In February, we released our second album titled Come To My Party. This included performances, videos and most recently a Xiu Xiu remix.
G: We actually have a few new WINKIE songs that we are trying to finish up. We are taking a little break from playing live for a few months and hope to have some shows scheduled for the end of this year/early 2017. We have also been working on a new project together which is pretty exciting for us.

Do you consider your music to be part of the current shoegaze/dream pop scene, or any scene?
G: My hatred of organized things prevents me personally from considering our music to be part of any scene, but it does not mean that we are not in there somehow.
P: We don’t self-identify with any one genre and scene’s tend to be negative and limiting.

Defining one's sound by genre can be tiresome, but do you feel that the band identifies closely with any genre? How do you feel about genres in music, in a general sense?
P: During our early performances we didn’t think about what we might be considered but — show after show — people would tell us we had a Slowdive…Cranes…Cocteau Twins vibe. So, it kind of stuck. That being said: I'd love if WINKIE was included in a Gregg Araki movie.
G: When we started to get comparisons to shoegaze bands I really did not get it at all. I’m a huge Kevin Shields fan but was not intentionally trying to sound "shoegaze".  I can totally understand the reference now though and it’s definitely complimentary and appreciated. I also do understand that it’s a necessary evil to be compartmentalized into a specific genre of music.

What do you think of modern shoegaze/dream pop/psychedelia artists, any favorites?
G: I really like Chasms. They have a Cocteau Twins vibe and are two incredibly talented women.
P: I prefer the bands putting their own fingerprints on the shoegaze sound. Definitely Chasms…Creation Myth, Deathday, The KVB and A Place to Bury Strangers.

What is the most important piece of gear for your sound? Any particular guitars/pedals/amps that you prefer?
G: I would say Pter’s bass is the glue to our sound and his set up is pretty impressive. There is no guitar on the record. It’s keyboards, bass, vocals and drums. I’ll try any keyboard or pedal combination — except for the Loveless pedal. I’m not using the Loveless pedal. Ever.
P: Both Gina’s keyboard (which most people assume is guitar) and her vocals are the bulk of our sound. The other major component is ‘fuzz'. I'm loyal to my Electro Harmonix Big Muff - I actually use two in my setup. I can improve the sound of almost anything by going through those pedals. My friend, Ren, at Sonus Fluxa, recently made a QuadOctave pedal for me — which has been getting a lot of use.

What is your process for recording your music? What gear and/or software do you use? What would you recommend for others?
P: We’ve recorded each album in our own studio (The Pink Room). It's a super basic setup.
G: Our recording process is arduous. We do everything separately. One of us records, the other listens and gives it the ok, then we build on it. I get lots of fashion magazines sent to our apt because I tend to write everything down on magazine pages and then leave them all over the studio. It’s this weird thing that I do. I wouldn’t recommend it though - it’s not a very organized system. If I have to re-record something it takes forever to figure out what blank stare I wrote on.
P: As for recommendations, record with whatever is available to you. Don’t procrastinate while waiting for perfection. I’ve known some talented musicians that never knew when to stop mixing.

How do you feel about the state of the music industry today? There is no doubt a massive change underway. How do you see it and do you feel it’s positive at all?
G: I’m indifferent to the music industry — although the rise in DIY ventures has definitely been a good thing.
P: We do as much on our own as possible. When we work with others we try to find the most like-minded people possible. That's how we deal with the industry.

When it comes to label releases versus DIY/Bandcamp and the like, what is your stance, if any?
G:  We do everything ourselves. So far it’s worked out pretty well. We try to personalize everything we send out. I know that Michael Gira does stuff like that — I know this because Pter has a whole bunch of SWANS stuff. But seriously, I think that when the artist takes time to acknowledge the listener it heightens the experience even more.
P: I’m open to whichever allows an artist to be creative and provide the best opportunity to connect the music to others. Although he recently started partial distribution via Mute, what Michael Gira had been doing with both Swans and Young God is a really good example of how to self-release music.

Do you prefer vinyl, CD, cassette tape or mp3 format when listening to music? Do you have any strong feelings toward any of them?
P: I prefer vinyl.
G: There has been a big revival of tapes and I’m just not into them at all.

What artists (musicians or otherwise) have most influenced your work?
P: I’m a huge fan of performers like PiL, Pan Sonic, Siouxsie & the Banshees, Big Black and the work of Jim Jarmusch.
G: For this record — I listened to a lot of Killing Joke and watched way too much evangelical television. Killing Joke is amazing. Televangelists are awful.

Can you tell us a little about what you are currently into (books, films, art, bands, etc.)?
G: I’ll read anything about the Manchester music scene. I never get tired of reading about it- especially Joy Division. The last book I read though was actually about the Père Lachaise Cemetery. If you have not been there I suggest you visit. As for music — we just saw Xiu Xiu perform the music of Twin Peaks and it was fantastic. Painting — Franz Kline and Kirchner are two of my favorites.
P: I’m currently reading Black Neon by Tony O’Neill. The Xiu Xiu performance was inspiring — as was the recent Diamanda Galás performance. I went to Genesis Breyer P-Orridge’s Try to Altar Everything (at the Rubin Museum) and the multi-performance Authority Figure (at the Knockdown Center). For bands, I’ve really been into the last NUN album and Exploded View’s “No More Parties in the Attic".

If you had to choose one track that was the ultimate definition of your sound, which would it be and why?
G: I like to think that we have not written it yet but someday it will make an appearance dressed as Dave Vanian circa 1985.
P: Hmmmm…this one has me stumped. I’m really not sure we have a definitive track.

Can you tell us a little about the band’s song writing process?
G: We don’t sit in a room together coming up with ideas for songs. I wish I could tell you that we had a regimented system but we don’t. Our friend Stephen from Prima Primo has tried to set up business hours for us. I think Pter might try to adhere to them but I just can’t.
P: Yeah, it surprises people, but we really don't record together. Usually one of us will start with an idea — drums, keyboards, vocals — and then the other person will start layering around it. We keep working that way — adding and deleting layers until we basically agree the song is completed. Our friend Stephen has been my creative "sponsor". Every Monday, he ensures I'm recording every week by sending me an inspirational Nick Cave gif.

What is your philosophy (on life), if any, that you live by?
G:  Life lessons via Bernard Sumner — “Everybody makes mistakes. Even me.”
P: “I prefer to be subcultural rather than mass-cultural. I’m not interested in hitting the vein of the mainstream.” -- Jim Jarmusch
Posted by When The Sun Hits - All things shoegaze. at 4:38 PM