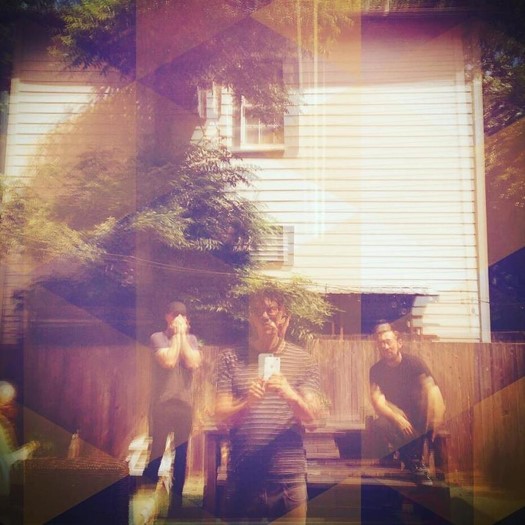 Formed in 2014, Everything Fades is the Austin-based trio of Kevin Flack, Daniel Owens and Marcus Pina. Earlier this year the band released an excellent double EP, Here's To A New Tomorrow/Moving Mountains, via the Dutch label Geertruida. This solid release has already helped them make a name for themselves in the dark psych/shoegaze genres, despite the band’s relatively short tenure.

The double EP offers up a promising set of psych-tinged tracks that dwell somewhere between light and shadow in the realm of shoegaze. There is an ethereal dream pop quality to their music that is balanced out and tempered by a darkness. This dual-nature, paired with a strong craftsmanship, makes for a rich listening experience.

On September 2nd the band released a split single via Bandcamp, the A-side being their well-crafted cover of Catherine Wheel’s classic track “Black Metallic.” This cover also appeared on the Strange Fruits tribute compilation released in June by our friends over at The Blog That Celebrates Itself. As their output thus far has proven, Everything Fades is a group to keep your eyes and ears on.


When The Sun Hits Interviews Everything Fades

Can you tell us what the band has been working on and what you've got forthcoming in the near future (any new releases, tour, etc.)?
Marcus: In May we released a double EP on cassette through Geertruida from Haarlem, Netherlands, along with a music video. It's also on most digital platforms. Most recently we recorded a cover of Catherine Wheel's "Black Metallic" for a compilation put out by The Blog That Celebrates Itself, from Brazil.

There's also a remix of the lead track from our EP, and a new video to accompany it. We have some recording time in the fall - recording a new EP.


Do you consider your music to be part of the current shoegaze/dream pop scene, or any scene? Defining one's sound by genre can be tiresome, but do you feel that the band identifies closely with any genre? How do you feel about genres in music, in a general sense?
Marcus: Sure, you can lump us in with those genres. Genres are helpful to sort through everything that's out there. Genres are guide posts. Playing to a specific genre style can be problematic however. Formulaic music is just that - formulaic.

Dan and I didn't start by saying, "Let's start a shoegaze band." Or any type of band. Rather, we talked about key elements - core principles - that we focused on to define our sound. Dual vocals, drones, hypnotic, lush, big, dark, loud. Once we started playing and maturing ideas the sound came together. It fits into shoegaze or dream pop genres but veers into others - there are several influences beyond shoegaze and psych.

What is the most important piece of gear for your sound? Any particular guitars/pedals/amps that you prefer? Reverb. And volume.


What is your process for recording your music? What gear and/or software do you use? What would you recommend for others?
Marcus: Use ProTools with caution. Use it to capture the sound, the performance, as you would tape. Don't obsess on perfection. Rock n roll isn't about perfection. It's messy and noisy and imperfect and that's what makes it dangerous and beautiful. Keep sight of that.

When it comes to label releases versus DIY/bandcamp and the like, what is your stance, if any? DIY, and if a label comes along and wants to pitch in, and it feels right, go for it.


Do you prefer vinyl, CD, cassette tape or mp3 format when listening to music? Do you have any strong feelings toward any of them?
Vinyl sounds the best. Format wise, we spend the majority of our time consuming mp3s - it's the most accessible format.

What artists (musicians or otherwise) have most influenced your work?
This is pretty vast. We all come from similar, but different backgrounds. The areas of overlap are accentuated by our perspective and individuality. That makes it interesting.