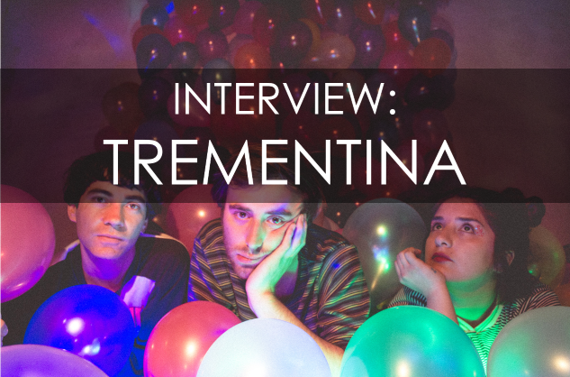 Trementina is a Chilean project consisting of Vanessa Cea (vocals), Cristobal Ortiz (guitar), Lucas Martinic (bass), and Andrés Yáñez (drums). We’ve loved Trementina’s delightfully noisy sound for years, but with the release of their newest LP, 810, they’ve eternally captured our hearts. 810 is a nimble foray into a more pop-oriented sound and the band’s fearless exploration paid off – this record is gorgeous and flawlessly executed. Each song sparkles with a radiance that feels new and different. We believe Trementina have found their true voice on 810. We couldn’t be prouder to share the following interview with Vanessa and Lucas of Trementina.

How and when was the band formed?
Vanessa: It was formed four years ago in Valdivia, Chile. We were really close friends, so one day the idea just came up to play the kind of music that we’ll never see in a live show in our lives. Valdivia is twelve hours to the south of Santiago, the only one big city in Chile. It’s difficult to get there for a concert, it’s expensive, it takes too much time, and in 2013 shoegaze was a non-existent genre in Chile.

Can you tell us what the band has been working on and what you've got forthcoming in the near future (new releases, tour, etc.)?
Vanessa: Well, we’ve just arrived back home from a tour in Mexico. We were supposed to have a tour in the States this year, but immigration decided that it was better if we stood on the other side of the border. It was wise advice, since we haven’t paid enough attention to Mexico. We’ve just released our new album, 810, so this year is based on promotion and touring. There’s going to be a couple of tours this year, maybe in Europe and Japan. As soon as we confirm the dates we are going to announce it on our Facebook page.

Do you consider your music to be part of the current shoegaze/dream pop scene, or any scene? Defining one's sound by genre can be tiresome, but do you feel that the band identifies closely with any genre? How do you feel about genres in music, in a general sense?
Vanessa: When we started, we felt really proud to be named as a shoegaze band, because that was what we were trying to do, bringing something “new” to our people. It’s kind of what you have to do as an artist – amplify people’s minds by showing them that there’s a whole new world to see. But now we want to have enough space to find ourselves in our work. We don’t want to be a slave of something that doesn’t belong to us. There are people who are surprised with our new record because it’s not “shoegaze” enough, or in the ways that they expect it to be. But that’s exactly what this is all about! If you want 30 years more of the same, you can just lock yourself in a room with your favorite records on repeat.

"It's kind of what you have to do as an artist—amplify people's minds by showing them that there's a whole new world to see."

I’m not against “genres.” I think that classifying music by genre is something very positive for the industry, because it helps you to reach ideal audiences. It also helps the audience find and listen to what they like, especially in this internet/over consume society. The problem is getting stuck on labels as a musician, limiting your creativity just because people think something about you and you have to give in to that.

What do you think of modern shoegaze/dream pop/psychedelia artists, any favorites?
Lucas: Well, the internet has melted together all genres in one place. That's pretty cool, lots of new sound combinations everywhere. Some of my favorites would be A Place To Bury Strangers, Pond, Choir Boy, Follakzoid, Japanese Breakfast, Suuns.

What is the most important piece of gear for your sound? Any particular guitars/pedals/amps that you prefer?
Lucas: Cristobal has got lot of pedals. LOTS. For this album, he decided to use harmonizers like the Whammy and the Boss one, also lots of reverbs and delays. The bass is a Japanese thingy I found in the trash as we were touring in Japan, but it had a cool deep sound, it's almost always just compressed. For recording we used a Marshall JCM800 with a few mics like SM57 and AT2020. One important piece of gear was the Midiverb2 with this strange and cool "stereolizer" preset I used a lot. For the drums, we used the samples from the Maschine Mikro.

What is your process for recording your music? What gear and/or software do you use? What would you recommend for others?
Lucas: Aside from what I previously mentioned, we also use a simple Windows PC with Cubase on it. I can recommend Focusrite gear to record cheap and good. About the process on this album, we isolated ourselves from the world in a small country house where we stayed for 2-3 months. We stayed there for like for a month without doing anything musical, just enjoying nature, fishing, cooking pies, hunting rabbits and that kind of thing. After that when we started composing songs a couple of weeks later, Cristobal came up with the "Please Let’s Go Away" guitar part (that sounds like an organ or something, but they are all guitars). That was the starting point of 810.

When it comes to label releases versus DIY/Bandcamp and the like, what is your stance, if any?
Vanessa: We just started using Bandcamp and Soundcloud, and it’s the best thing in the world! People can buy your music and support you directly. Every dollar goes into the musician’s pocket that made that song for you. Now we are working with a label because we needed to add physical editions to our releases and we don’t have enough money to make it by ourselves (haha).
Do you prefer vinyl, CD, cassette tape or mp3 format when listening to music? Do you have any strong feelings toward any of them?
Lucas: Vinyl, it just sounds so nice!

Can you tell us a little about what you are currently into (books, films, art, bands, etc.)?
Lucas: Love. It's good to enjoy love for a moment.

If you had to choose one track that was the ultimate definition of your sound, which would it be and why?
Vanessa: “Oh Child”, the second single of 810. The vocal melody feels really natural for me. Even when the song was still just shapeless background guitar, I felt like I was floating in chaos, dancing in the middle of a storm – which is the sensation that I would like to make the people feel. That’s how it feels to be young under a grey sky, full of energy and chaos.

Can you tell us a little about the band’s song writing process?
Vanessa: I’ve always just improvised lyrics while we play and that’s how I leave it. It’s hard for me to change something that already has a form in my head.

What is your philosophy (on life), if any, that you live by?
Lucas: To live for what you like, and step by step. Improvising a bit. See what happens next. You can't do long term plans because you, as a human, are an evolving creature.