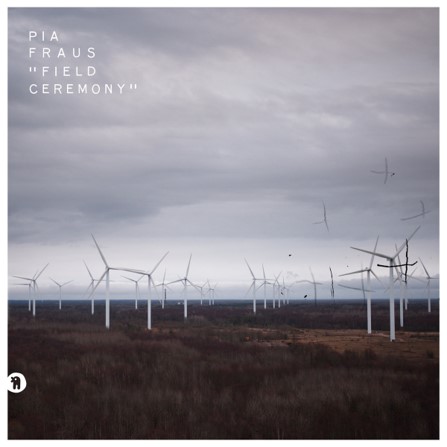 Estonian dream-poppers Pia Fraus have long held a reputation for exploring the subtleties of My Bloody Valentine-inspired shoegaze. With their latest full-length Field Ceremony, however, the band prove that they have moved beyond inspired reenactment to approach the level of the touchstone bands they’ve looked up to.

A going concern since 1998, Pia Fraus drew attention with snappy, strummed pop songs that forewent the gargantuan instrumental riffing that often opened earlier shoegaze pieces, such as MBV’s “Only Shallow”. Their tracks tended to move directly into the subdued vocal melodies and chord changes on which they built their world. Even on early tunes such as “Swim In Eyes” and “Moon Like A Pearl”, both on the 2001 EP debut Wonder What It’s Like, Pia Fraus exhibited a cosmopolitan refinement and restraint that allowed twee organ textures and crisp cymbal work to peek out above the fuzz.

In Solarium, the band’s 2002 debut full length, and Nature Heart Software, their 2006 sophomore album, saw a subtle and gradual tweaking of the formula along with higher production values. On Software especially, the band offered Isn’t Anything send-ups such as “Day Week or Season” as well as a newer, starker sound of their own exemplified by the elegant horn-filled album closer “Japanese Heart Software.”

The band’s third LP After Summer appeared in 2008, while the 2003-2008 period was also characterized by a healthy output of singles and EPs—the excellent, experimental Mooie Island EP ranking as this writer’s favorite—revealing a creatively restless side of the band that furthered their appeal. The discography resumes in 2013 with the Silmi Island compilation, a “greatest hits” of sorts that aimed towards consolidating the project’s legacy with thick, bass-heavy reworkings of previous material.

Last October’s Field Ceremony, the first album release in eight years, is a companion to Silmi Island in its full, blossoming sound, while also working as a statement of intent. With this latest disc, Pia Fraus provide a dependable new album of characteristically Pia Fraus material. After twenty years of evolution as a band, they are now masters of their very own corner of the dream-pop universe.

Opener “It’s Over Now” sets the tone for Field Ceremony immediately. Cooing mantras and harmonies pulsate over resonant and grinding guitar tones albeit with a simplicity that imparts a special and modern devotional quality.

“Never Again Land” and “Autumn Winds” follow. The hooks and classic pop structures at times bring to mind the lovesick maturity of Belle and Sebastian, but amidst dashes of woozy fuzz and effects bounding about the periphery.

After this, the acoustic-led “Mountain Trip Guide” arrives, building further on stately song craft though this time with a woodsy, starry-eyed folk number that serves as the latest diversion within the band’s arsenal. The hushed, downcast “Don’t Tell Me How” plays a similar role later as a track sprinkled within the rockers to break up the pacing effectively.

“Endless Clouds” harkens back to the band’s buzzy, tinnier early days. A jangled, atonal guitar refrain between the verses elicits the same uneasy feeling as a prime Sonic Youth melody.

Closer “That’s Not All” rounds out the set with an emphasis again on the band’s more punky, whammy-bar dominated work. By the time lush string synths overwhelm the song’s refrain, it’s apparent that Pia Fraus have created a succinct collection of music that pulls effortlessly from across the many strengths and moods the band have established within their palette across decades. Field Ceremony grows the band’s legacy and reminds listeners why they came to love this now iconic band in the first place.

Field Ceremony vinyl, CDs, T-shirts and downloads are available from the band’s web store. An EP consisting of remixes of “Mountain Trip Guide” has just been released.
Posted by When The Sun Hits - All things shoegaze. at 12:37 PM