Psychedelic AF: an Interview with Firefriend. 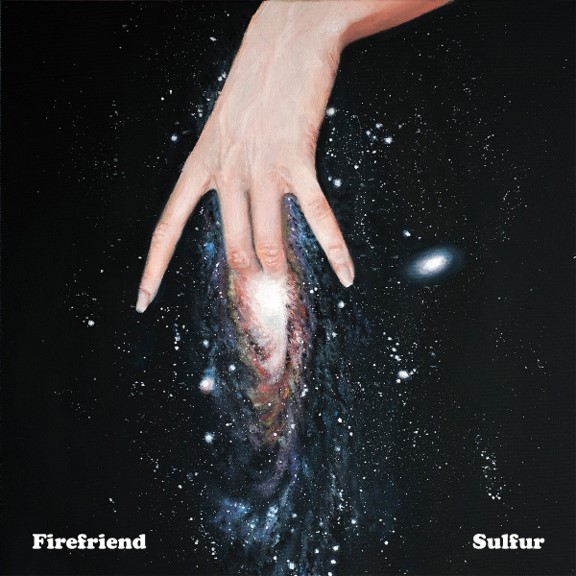 Setting aside the buzzy haphazardness and semantic dilution characterizing today’s use of “psychedelic” as a descriptor for music, look no further for utterly authentic, quintessential psychedelia—music that expresses and invokes extraordinary states of mind and perception—than the powerful, inspired rock of São Paulo, Brazil’s Firefriend. This prolific project has been releasing albums and EPs for a decade and consists of Julia Grassetti on bass, vocals, and keyboard; C. Amaral on drums and various electronics; and Yury Hermuche on guitar and vocals. They’ve been recording and producing in their own studio since 2016’s full-length, Negative Sun. 2017 EP The Black Hole and this year’s long-player Sulfur have followed, creating a stunning trilogy of self-recorded efforts, each one riveting from start to finish. Elite Portland psych label Little Cloud Records has done us the service of releasing The Black Hole and Sulfur in fine vinyl editions available from Little Cloud itself as well as from Cardinal Fuzz, while Negative Sun is available in digital form. 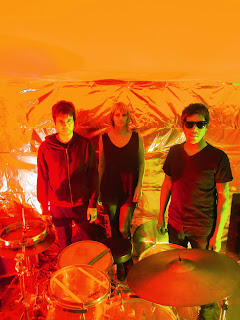 In the spirit of predecessors The Velvet Underground, Firefriend prize the authentic over the finely wrought, and in doing so achieve, like the Velvets, a very distinctive immediacy and presence. Some of Firefriend’s excursions are on the lengthy side—“Quiet Vampires”, the closing track of The Black Hole EP, runs 8:29 and takes up an entire side of the 12”—but even the lengthiest are gripping throughout. In sympathy with much of psychedelia, post-rock, and shoegaze, there’s a great deal of emphasis on sounds and textures, often strange ones. Both Julia and Yury deliver vocal incantations with a spoken and whispered feel while still subtly expressing melodic lines. Structures are unexpected and seem very organically grown, as if emerging from within the music rather than being imposed from without, while the tracks still move through a very specific sequence of transitions that are essential to their impact. The sum of these propensities is a wonderful fusion of song and experimentation—dark and heavy, jaggedly beautiful, uplifting in its ultimate effect.

The songs are not without melodic and rhythmic hooks, but the real “hooks” in this
material, the qualities that grab and hold our attention so effectively, are largely located elsewhere. The core of the music’s power lies instead in the way Firefriend seems always to take us somewhere, to portray and draw us into spaces and places—not literal
geographies, but, in the great tradition of psychedelia, territories of mind and feeling. (The term “psychedelic”, coined in 1956 by a research psychiatrist for the purpose of

bringing trip-inducing drugs such as LSD, mescaline, and psilocybin together under their own classifying rubric, has two Greek roots, “psyche”, meaning “mind”, and “delos”, meaning “manifest”; its literal meaning, then, is mind-manifesting, mind-revealing.) Extraterrestrial mindscapes shiver and unfold in the revealing beam of Firefriend’s starcraft headlights. “We like to think,” Yury has told us in our electronic correspondence, “that we are looking for new shapes and places…Don’t you feel that some songs, some records, are entire universes?”

Sulfur comes with a booklet insert titled “Operating Manual for Planet Earth.” It lays out the bands entire discography while also, in accordance with the title, providing handy travel tips for any entity finding herself “lost on Earth”. Herein Firefriend advises, “Express yourself through any method you want. That’s how you become a transmitter, generating waves that will open connections with others vibrating on the same frequencies. That energy field will change the game.” Now that is a truly psychedelic perspective if there ever was one.

Deep gratitude to Firefriend for taking time out for this interview and for releasing such an awful lot of really good music. Thanks also to Little Cloud for connecting us with Firefriend for the interview that follows.

"We take our ideas—sounds, riffs, chords progressions, whole songs—to rehearsals, where the band will then destroy them, and build a new thing out of their bits."

How and when was the band formed?
JULIA: I didn’t know Yury very well back then, but he threw the best parties of 2006. I knew he was playing guitar and recording some tracks. I knew I had to play bass in that band. He invited me to record a cello. I jumped into it and also recorded some bass and vox. It really ended very well I think.
C.AMARAL: I joined the band back in 2011, to play some guitars. And then, at the beginning of 2014, I got the drums.
YURY: São Paulo is one of the largest, filthiest and most violent cities of the world, you got to make things happen—fast—otherwise you may end up stuck in an office you hate or in traffic or even getting killed. We started the band and played and recorded with several musicians until C.Amaral arrived in 2011. All these years! It's been a trip.

Can you tell us what the band has been working on and what you've got forthcoming in the near future (new releases, tour, etc.)?
YURY: We’ll play in the UK on Sept 4th! Manchester’s Astral Elevator booked our first gig there. We are also releasing a new album, it’s called Yellow Spider. All its seven tracks were written simultaneously with finishing our last album, Sulfur. The day we had the Sulfur masters done we were in the studio recording the drums for Yellow Spider. Everything came together real fast. I don't know if it's wise to release new material so soon, but I can't help it, these new songs took over our minds so easily and I bet this new record will add perfectly for everyone who's tripping with Sulfur. And anyway we are addicted to recording and making albums.
C.AMARAL: We are playing, rehearsing and recording all the time.
JULIA: Yes we have this European tour coming, so now we are working on the songs we want to play there.

Do you consider your music to be part of the current shoegaze/dream pop scene, or any scene? Defining one's sound by genre can be tiresome, but do you feel that the band identifies closely with any genre? How do you feel about genres in music, in a general sense?
JULIA: I think we drink from several genres, since each one of us loves different things. But the three of us are keen to psychedelia and all it has to offer.
C.AMARAL: I don’t know, I think we travel across genres, including shoegaze, so I can’t put the band in one specific genre.
YURY: We like to jump into new songs without a map—feeding them with whatever we have on our hands and minds at the moment. We love to see how noise and melodies collide, where their wreckage falls. Sometimes it goes in one direction, then at the next second or song, we may end up in someplace else. Noise and melodies are in this unstable balance with most of our fave records and artists, as in life itself. Shoegaze and dream pop are different points of the same thread—yes, we are there, somewhere.

What do you think of modern shoegaze/dream pop/psychedelia artists, any favorites?
C.AMARAL: It’s fucking good!
JULIA: I think we are living a wonderful wave of these genres, there is a lot of good stuff going on.  I’m so grateful to this blog, Psychgazer, where I’ve gotten to know amazing bands, like The Altered Hours, Rancho Relaxo and New Candys.
YURY:  Buried Feather (Melbourne),  Los Mundos (Mexico). Darker My Love (California) created insanely good music on their time. There is so much wonderful music being created today. Everywhere.

What is the most important piece of gear for your sound? Any particular guitars/pedals/amps that you prefer?
C.AMARAL: my bandmates—my friends playing with me.
How do you feel about the state of the music industry today? There is no doubt a massive change underway. How do you see it and do you feel it’s positive at all?
C.AMARAL: Sincerely I don’t know much about the music industry; the pace of technology is so brutal I just can’t track where it goes.
YURY: We are all trapped in this colossal digital revolution, and it’s liquefying everything. While I enjoy the promises of universal access and global connections, the flow of new music/images/information and how it could open our eyes, minds, and ears, I’m also concerned about its downsides, and there are many. That’s one hundred percent  the liquid XXI century mood.
When it comes to label releases versus DIY/Bandcamp and the like, what is your stance, if any?
YURY: We love how Little Cloud Records takes care of our records. We share with those guys this love for music. We also released several albums as unsigned artists, before Little Cloud, and it’s amazing what one can do alone with the contemporary tools. I want every band releasing their work anyway because there is so much to say and often it’s a thousand times better than any blockbuster sequel or Netflix crap. Independent music and labels are the virus our culture needs so badly.
C.AMARAL: Hard to say. I like Bandcamp because there are no costs for musicians to post their work, and the website is also very efficient in building up a community around bands, inviting people to buy music from unknown artists.

Do you prefer vinyl, CD, cassette tape or mp3 format when listening to music? Do you have any strong feelings toward any of them?
JULIA: Vinyl. I’ve always listened to vinyl, since I was a kid, without earphones, that loud sound taking over the whole space, the low tones enveloping you. It’s comforting.
C.AMARAL: I like vinyl for its format and sound, but I listen to music in every format.
YURY: I can’t really dig MP3. It’s like low-res JPGs.

What artists (musicians or otherwise) have most influenced your work?
JULIA: Black Sabbath is the band I’ve most listened to, since I was thirteen years-old. Black Sabbath is always playing here at home.
YURY: Velvet Underground, John Coltrane, Burroughs, Kerouac, Stooges, MC5.
C.AMARAL: John Coltrane,  Neil Young, Beatles, Spacemen 3, Can.

Can you tell us a little about what you are currently into (books, films, art, bands, etc.)?
C.AMARAL: I’m reading Here, There and Everywhere, the memoir by [Beatles engineer and McCartney producer] Geoff Emerick. And just watched D’après une histoire vraie by Roman Polanski.
YURY: Reality is my thing now. How it is distorted by media, corporations, and governments. Democracy is under attack—and Brazil is this forever laboratory for updating strategies and tools for massive brainwashing. Even before the 2016’s coup, the machine is working at its maximum here.  The XXI century is turning into this complex vortex, echoes of the 1930s mixing with hyper-speed cables and environmental disasters. It’s fascinating and brutal.
If you had to choose one track that was the ultimate definition of your sound, which would it be and why?
C.AMARAL: “Dreamscapes” - I think this song captures, somehow, the essence of this band.
YURY: It can’t be defined by one track.

Can you tell us a little about the band’s song writing process?
YURY: We take our ideas—sounds, riffs, chords progressions, whole songs—to rehearsals, where the band will then destroy them, and build a new thing out of their bits. That’s an adventure we dig.
What is your philosophy (on life), if any, that you live by?
C.AMARAL: My philosophy is…keep me in debt so I can buy records forever.

Fiction writer Jack Beltane has given Firefriend an apt and eloquent write up that you
can read here. Firefriend’s next album Yellow Spider drops on July 27th, 2018; pre-order the download here.