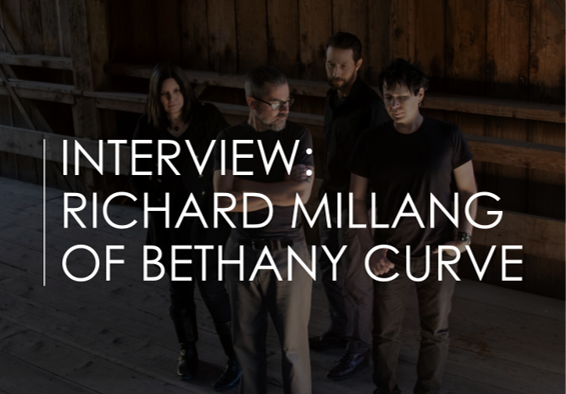 Bethany Curve formed in 1994 in Santa Cruz, California with an original lineup consisting of Richard Millang (vocals, guitar), Ray Lake (vocals, guitar), Chris Preston (bass) and David Mac Wha (drums). At this time, the first-generation British shoegaze bands like MBV, Lush and Slowdive were just beginning to fade away, but shoegaze wasn't truly over. By the time Bethany Curve released their 1995 debut, Mee-Eaux, the second wave of 90s shoegaze was in full-swing, this time spearheaded by American bands who were creating a slightly different sound.

The dark space-rock atmosphere of Mee-Eaux is an excellent example of how shoegaze was evolving at that time. The genre's hallmark drones, distortion and ethereal tones were all still very much in play, but Bethany Curve used that sonic palette to plunge their sound into a much a darker abyss. Their spaced-out melodies, powerful riffs, dirge-like bass lines and heavy drumming style created an intoxicating backdrop for the haunting lyrics. The results were compelling and beautiful.

Since the beginning, the group has created music according to a specific motto or code: Atmosphere | Arrangement | Sound | Layering | Noise. This deliberate approach has served them well. Over the span of six studio albums, including the just-released masterpiece Murder!, the band has continued to explore their sound in new and exciting ways. Today, their lineup consists of original members Richard Millang and David Mac Wha, and they've since added Nathan Guevara on guitar and Lisa Dewey as a vocalist.

Songs like “Vanish”, “Door 2416” and “Long Beach” were practically life-defining for me on a personal level, and that’s just scratching the surface of a back catalog that deeply influenced me and the way I listen to music. I can’t express how proud and excited we are to share the following interview with Richard Millang of Bethany Curve with you.

How and when was the band formed?
In April 1994, I saw 2 live shows that blew away my 19-year-old mind. On April 2, 1994, Nate and I saw Cocteau Twins at the Warfield in SF. Then on April 11, 1994 we drove down and saw Slowdive at the Roxy in LA. In fact, Super Thirty One (a popular local shoegaze band back then) opened for Slowdive. I remember watching both Super Thirty One and Slowdive and thinking to myself with massive motivation, I’m going to start a f’ing band! The next weekend, I was hanging posters all around Santa Cruz looking for likeminded musicians. My posters referenced Cocteau Twins, Pixies, Slowdive, and MBV. Within a couple weeks, Ray called me and invited me to come play with him and Chris one afternoon to see if it’s a good fit. The very first practice, we wrote the verse and chorus to the song “Walk In” from our record Mee-eaux. Within a couple months we found David and that was it. Our first gig was in July 1994.


Can you tell us what the band has been working on and what you've got forthcoming in the near future (any new releases, tour, etc.)?
Releasing Murder! was a very long and exhaustive and emotional process for me. Don’t get me wrong, I absolutely love this record. But it was a tough haul. For me, this is the purest expression of the BC sound. I was trying to do this on You Brought Us Here and Flaxen and only got close on some songs, but I feel that I’ve finally harnessed the sound purely and consistently across 10 songs on Murder!.

The point being, this is all I’ve been working on for years and now that it’s released, I’m sort of basking in the moment. Plus, I’ve been working with the label on the lead up and post release stuff which has been a crazy amount of work. You wouldn’t think so, but it is. Lisa and I exchange emails and texts every day on new decisions relating to the record. That being said, I’ve just starting to consider what may follow Murder!. I’m thinking about making a tweak on the BC sound. Perhaps even changing up the writing and recording process altogether. Also, we will likely remaster Flaxen and release it on vinyl within the next year.

Do you consider your music to be part of the current shoegaze/dream pop scene, or any scene? Defining one's sound by genre can be tiresome, but do you feel that the band identifies closely with any genre? How do you feel about genres in music, in a general sense?
I simply categorize our music as shoegaze because it has the all the typical attributes. Like our long-time motto: atmosphere, arrangement, sound, layering, noise, we’re very deliberate about this.

But some context. When we completed our first record, Slowdive was still a band, Lush was still touring and releasing records, Pale Saints were still touring. I mean, in the mid-90s here in the US, shoegaze was still growing even though it was out of style in the UK. So for us, there was never a fear or concern being associated with shoegaze.

Regarding genres, I don’t have any issue with them but I do understand how it could pigeonhole a band who might be trying to do escape and something different or if the genre falls out of favor (like it did in the UK). I could see that being frustrating. But genres do help listeners mentally categorize by the sounds and styles they prefer. So it’s a convenience but not scripture. And there’s the positive to genres in the way that they sort of build a community around the bands within it. But if you’re someone who obsesses with genres or tries to over-define them, then yes, it’ll probably be tiresome and drive you nuts.


What do you think of modern shoegaze/dream pop/psychedelia artists, any favorites?
Truth being told, I’ve kind of been in a new music lull, likely because I’ve been focused on getting Murder! completed and released. These aren’t specifically shoegaze but some semi-current favs of mine include: HTRK, Warpaint, Exploded View, John Maus, Odd Nosdam, Black Moth, A Place to Bury Strangers, Belong, Tame Impala, Besnard Lakes, Beach House, and I thought the new Ride record was pretty okay. I’m likely forgetting a whole bunch of others at the moment.

What is the most important piece of gear for your sound? Any particular guitars/pedals/amps that you prefer?
Yes, and anyone from our era will cringe at this. I’m a die-hard Alesis Quad GT fool! The way the reverb is integrated into the overdrive and compression is unmatched (for me personally). I spent years testing out different rack units, pedals, latest greatest expensive shit, whatever, nothing could come close. That in combination with a couple pedals is basically it for me. I used to carry around this ridiculous pedal board setup during the Skies and Gold era but over time as I started developing our sound with consistency, I reduced the number of effects to just a few. Songwriting and consistent textures became more important than stuffing a gazillion different effects into a song.

What is your process for recording your music? What gear and/or software do you use? What would you recommend for others?
I’ve used Steinberg Cubase software for years. I like it but I also realize that Pro Tools is kind of standard for most. My recommendation is to find a platform that works well for you as an individual. So important because you want a program that doesn’t distract you from your music creation process.

When it comes to label releases versus DIY/Bandcamp and the like, what is your stance, if any?
All depends on what your goal is as an artist. Labels have industry relationships and connections that we as a band do not. And they also have experience releasing records and know the ins and outs. So, it helps us a lot to not take on that headache alone. However, if you are first starting out and money isn’t falling out of the sky, doing a self-release via Bandcamp is a great way to go. And there are lots of great bands who self-released everything. Just depends on what your goals are.

Do you prefer vinyl, CD, cassette tape or mp3 format when listening to music? Do you have any strong feelings toward any of them?
Vinyl’s just sexy! It’s fun playing vinyl on the record player and all the little steps involved and geeking out on the sound, etc. That’s my preference but that’s also when I’m home and have the time to enjoy it. Obviously in the car it’s about convenience and I default to digital.


What artists (musicians or otherwise) have most influenced your work?
Probably no surprise from my earlier remarks, but Neil Halstead from Slowdive, Robin Guthrie from Cocteau Twins and Charles Thompson from the Pixies.

What is your philosophy (on life), if any, that you live by?
Oh fuck! Really? Okay. It’s something like this:
1. Decide what you want, 2. Aim at it with purpose, 3. Go make shit happen.
Posted by WTSHamber at 1:07 PM