INTERVIEW: Roya and Matt of So Totally. 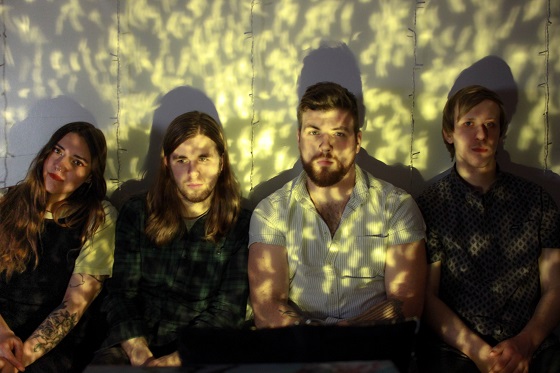 Rarely have we celebrated a band’s debut full-length as much as we have So Totally’s May 2019 release in the shape of…. The Philadelphia, PA quartet, founded about four years ago, here delivers a fresh new blast of classic nineties-style American shoegaze and noise rock, bringing to mind Lilys, Swirlies, and Medicine, as well as MBV (check out “Vision”). Furthermore, these nine songs will have no trouble holding their own in mixes with such seminal projects. Look no further than So Totally for proof that it’s still fully possible to work this kind of territory and come out with a distinctive, exciting sound of your own.

In the shape of… is rich and subtle enough to listen to day after day and continuously yield new rewards. Its compact thirty-two minutes pass too quickly while nonetheless leaving the sense of a well-wrought, completed whole, solidly put together yet generous with the textural bristle and surges of squall essential to this kind of music.

So Totally first appeared on the radar with the archly titled December, 2016 digital and cassette EP a cheap close-up of heaven. The ensemble consists of Roya Weidman and Matt Arbiz on vocals and guitars—offering the kind of male-female vocal interplay so exquisitely employed among the bands mentioned above—with Ryan Wildsmith on bass and Joe McLaughlin on drums.

In the shape of... is available digitally through Bandcamp. The cassette edition, released today, will be available only at the band's shows until Citrus City Records offers it online sometime shortly before the end of the month.

Huge thanks to Roya and Matt for the time, effort, and thoughtfulness involved in providing the following interview.
▲ ▲ ▲ 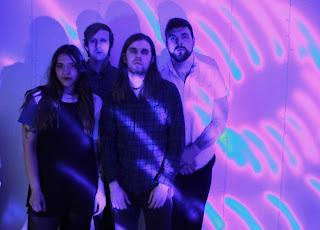 How and when was the band formed?
Matt: The band started in 2015 as a three-piece. Roya and I booked a full band gig without having a drummer.  Joe and I were working together at the time and had a lot of overlapping music taste so he agreed to fill in for a few shows. Luckily it became a permanent thing. When we brought Ryan in on bass, we had played in previous bands together so it felt like a no-brainer. The creative chemistry was really good right from the start.

Can you tell us what the band has been working on and what you've got forthcoming in the near future (new releases, tour, etc.)?
Roya: We digitally self-released our first full length in the shape of… on May 3rd. It took very long (over a year) to finish, but we’re happy it’s finally out!! Citrus City Records, who co-released our EP with Forged Artifacts, has done tapes for this record too.

Matt: We’ll be having a tape release show at Johnny Brenda’s in Philly on Thursday, July 11th [Tonight!-Ed.]. We’re hoping to have new music recorded and tour plans set by end of summer. There are definitely things in the works.

Do you consider your music to be part of the current shoegaze/dream pop scene, or any scene? Defining one's sound by genre can be tiresome, but do you feel that the band identifies closely with any genre? How do you feel about genres in music, in a general sense?
Roya: I think we have our shoegaze moments. Someone referred to us as heavy reverb’d indie recently, which sounds right. I don't think we directly identify with any one genre. It's more about blending whatever influences we have at the moment, not saying no to ideas, etc.

What do you think of modern shoegaze/dream pop/psychedelia artists, any favorites?
Matt: There are a lot of good bands making music right now: Ringo Deathstarr, Froth, Ulrika Spacek.

What is the most important piece of gear for your sound? Any particular guitars/pedals/amps that you prefer?
Roya: I got Curtis Novak Gold Foil pickups installed in my guitar (J Mascis Jazzmaster) and they’re really clear/beautiful! The Electro-Harmonix Cathedral reverb was the first pedal I ever got, Matt actually got it for me! But it’s still the reverb I use, it has a lot of options and makes everything sound full.

Matt: My Sunn Concert Lead is the backbone of my rig. It’s the loudest and cleanest amp. Effect-wise, they all contribute to our sound so it's hard to pick just one. Definitely my nineties reissue Fuzz Face. I’ve been through a bunch of fuzzes but this one seems to move the most air. The Eventide Space reverb is also such a sick pedal. Makes everything sound huge.

What is your process for recording your music? What gear and/or software do you use? What would you recommend for others?
Roya: Most of our recording is done in our apartment. We live above an art gallery that is only open a few times a week so when we want to be loud, we can be.

Matt: In the past, we used a Tascam 16x08 interface to track everything into GarageBand on an old 2012 Macbook, which all had their limitations. Since finishing the record, we’ve upgraded to a Focusrite Clarett 8preX and gave the laptop an overhaul. On in the shape of..., we had the opportunity to record drums and bass in a studio with our friends Chance and Hank and they sound killer.  We ran the drums through a Neve preamp and distorted the hell out of them, something we never could do at the apartment.

Roya: The most important thing is feeling comfortable and being able to know when to push and “perfect” something or when to let it be. Have a vision going in and make it happen.

When it comes to label releases versus DIY/Bandcamp and the like, what is your stance, if any?
Matt: Self-releasing music is all we’ve done with Totally but I think the overall experience with releasing through a label is that there is a lot of waiting around. Label schedules can put you out six plus months from recordings.

Roya: We aren’t anti-label by any means but we take a long time to create what we make and for this last release we wanted to do it at our own pace. By the time we finish, we want to put it out as soon as possible.

Do you prefer vinyl, CD, cassette tape or MP3 format when listening to music? Do you have any strong feelings toward any of them?
Matt: As far as sound goes, I think we all enjoy a good low-end presence and that’s hard to get with cassettes and vinyl. I guess it depends on how you’re listening. As long as you can listen to it loudly, I don't think it matters.


What artists (musicians or otherwise) have most influenced your work?Roya: Some of our all-time faves are bands that can fill space with big textured sounds. Swirlies were always good for that, and the Pixies for weird transitions and melodies.

Can you tell us a little about what you are currently into (books, films, art, bands, etc.)?
Matt: Early Gregg Araki movies like Doom Generation, Nowhere. They’re all super pleasant visually and have great soundtracks (Medicine, Lush, Catherine Wheel, The Jesus and Mary Chain).

Roya: Anything sensory overload. Old movies before everything was CGI have the best visuals, anything horror or weird mixed media.

If you had to choose one track that was the ultimate definition of your sound, which would it be and why?
Matt: This question is hard! I think we both feel like “Pluto” encompasses our sound pretty well. A lot of our sound is created around merging of our different songwriting styles and what we bring to the table when the songs are being written. Pluto is one of those ones that came together pretty quickly and has pieces of everyone’s style in it. It’s always cool when that happens!


Can you tell us a little about the band’s song writing process?
Roya: Usually Matt or I write a basic structure for the song and bring it to each other to start piecing together ideas. Sometimes I’ll sit on lyrics for a long time and apply them to songs as we go but other times the whole song comes at once, so it’s hard to say. But we usually just go to practice with some ideas and everyone sorta goes at it ‘til we work it out! It’s fun.