Interview: Brandon Capps of Half String. 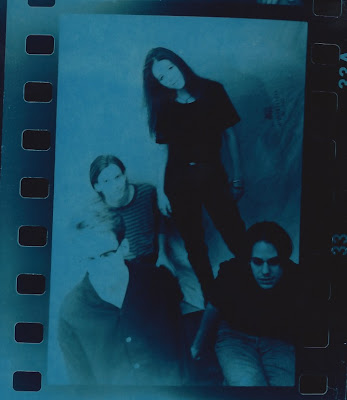 When The Sun Hits Interviews
Brandon Capps of Half String
Interview by: Amber Crain
How and when was Half String formed?
It was Summer 1991 in Tempe, Arizona. My friend Tim and I had seen Ride and Lush co-headline the Roxy in Los Angeles earlier that year. I was totally blown away by how gorgeously textured music could be played in the same traditional rock format I had always loathed—plus it was even better played fucking loud! For years, I had been making dark/pretty ethereal instrumentals with guitars/drum machine/4-track, and thought it was time to bust out of the bedroom to see what was possible with a band. Tim had just started playing bass; we shared similar musical tastes, mostly in the realm of 4AD, Factory, and Creation. We knew Kimber from shopping at her record store (Stinkweeds) since we were teenagers. Somehow it came up that her Dad was a jazz drummer, so Tim and I got fixated on the idea of getting her to play with us. She finally agreed. We borrowed a drum kit, cleared the living room, and never looked back. A couple years later, Matt joined on second guitar. In 1994, Tim left the band, and Dave Rogers joined.


Can you tell us what the band has been working on and what you've got forthcoming in the near future (new releases, tour, etc)?

Captured Tracks took us by surprise this past October, approaching us to do a reissue for their Shoegaze Archives. Though the band split in 1997, this record has inspired us to reunite in June for a mini-West Coast tour. It’ll be capped off in Los Angeles with an all day festival that I’m helping Part Time Punks organize. The focus will be shoegaze + newgaze + synthgaze. It’s the first festival of its kind (at least for Los Angeles), so I’m really excited to be part of it. Everyone in Half String is psyched to hang out and make some noise again—it’s been 15 years since our last show. Captured Tracks has talked about reissuing A Fascination with Heights later this year—there are some great outtakes from that session that need to see the light of day.

We’re still waiting to receive our official Membership Cards from the International Governing Body of Shoegazers. Seriously, I think it’s only natural for anyone who listens to/collects music to categorize and assess similarities between bands and their sound. Humans want to keep things organized; it creates a common language to communicate with fellow music lovers (or haters). But it drives musicians and bands fucking nuts, because most artists want to be original and blaze their own trail. However, I can appreciate the romantic notion of someone wanting there to be some kind of utopia for bands that make blissed-out ethereal records. I, myself, would get excited when reading about “The Scene That Celebrates Itself” in Melody Maker and NME. If anything, I guess we would identify with “Beautiful Noise”, the regional underground scene in Arizona back then. It was really just a handful groups (Alison’s Halo, lovesliescrushing, Scenic, Lycia, Firecracker, Dogshow, Six String Malfunction, Soul Whirling Somewhere and Half String) who bonded over our frustration with how dismal and repressed the local music scene was in Phoenix. There was no venue or built in audience for what any of us were doing, so we started from scratch and organized our own festivals. It ended up bringing together all sorts of misfits into a new music community, and eventually sparked curiosity from those outside of Arizona. 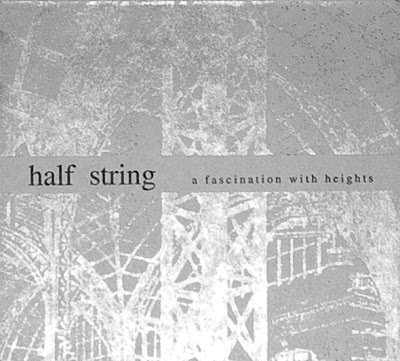 Sometimes, it feels like being wrapped in a warm blanket of nostalgia. I dig it—as long as there is a great song or melody at the heart of it. I mean, anyone can cop a sound from the past, but creating a vibe in a song that leaves an impression takes something special. I’ve come to appreciate many new bands and their take on the past. Favorite new-ish bands of late are Pink Playground, Be Forest, Horrid Red, Terry Malts, Toy, Real Estate, Violens, Connan Mockasin, Hoop Dreams, Death and Vanilla, Holograms, and The New Lines.

Kimber. She isn’t a piece of gear, but she was a crucial element of our sound. She had a really great approach to the drums; strong and steady, but with lots of swing and smart flourishes. As far as guitars and effects, I played a ’91 American Fender Telecaster through a combination of two rack processors (a Roland GP16 and Alesis Quadraverb) and a Marshall JCM900. Matt played an Allan Holdsworth signature Ibanez through a Quadraverb and Fender Twin. He also had an awesome black t-shirt with a howling wolf (he was way ahead of Bret from Flight of The Conchords)—I’m sure it influenced his sound, too. My favorite pedal is a circa-1980 Ibanez analogue delay pedal (AD-80) that Kimber gave me. At one point it was modified so an expression pedal could control the delay time while playing.
What is your process for recording your music? What gear and/or software do you use? What would you recommend for others?

Well, it was the 90’s, so recording technology was totally different compared to now. We recorded most of our rehearsals on a Yamaha MT100 cassette 4-track. Our friend Dan Nelson had a Tascam 488 cassette 8-track that we recorded the Eclipse and Oval singles with. Tripped Up Breathing was recorded in a “proper” L.A. studio to ½” analogue then transferred to an Alesis ADAT and mixed in Phoenix. A Fascination With Heights was recorded to ½” analogue in our living room, then transferred digitally and mixed in a home studio with an early version of ProTools. In the 90’s we would have to save up funds from gigs, or borrow money to pay for studio time or an engineer with gear. I envy bands today, who can record on the cheap with the laptop and some decent mics and preamps. 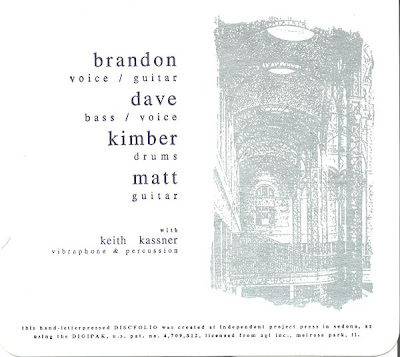 I think many painful, but necessary changes have come about in an industry destined to have its playing field leveled. There are usually too many hands involved with putting a record out—many of those involved have no regard for artistry or innovation, and end up tainting the creative process for a band. This isn’t always the case, but more often then not, the label (especially the majors) fuck up a good thing. At least today, the power has transitioned into the hands of the artist and listeners. It’s amazing how many resources there are to get your music out, and means for people to hear it. It’s been inspiring to see a number of independent record stores and indie labels survive and thrive during the transition. I like to think its due to the fact they had integrity and an authentic love for music all along.

If you have the energy and faculties to put something out and promote it on your own, I think
that’s great. Go for it. And, if it’s truly special, it will find its way to appreciative ears. Though, it makes sense for some bands to partner with a label that is dedicated to supporting their vision and nurturing a career.
Do you prefer vinyl, CD, cassette tape or mp3 format when listening to music? Do you have any strong feelings toward any of them?

I have always loved the physical experience of listening to records. But, I probably listen to MP3s mostly, for convenience sake. I really like having a song magically pop in my head, then have it only be a swipe of the finger and click away from actually hearing it. I also love the random nature of shuffle on the iTunes library—I’ve incidentally enjoyed so many songs/bands that I probably wouldn’t have chose to listen to for years, if ever again. Red Lorry Yellow Lorry and The Left Banke have experienced an unexpected resurgence recently in my household thanks to Shuffle. 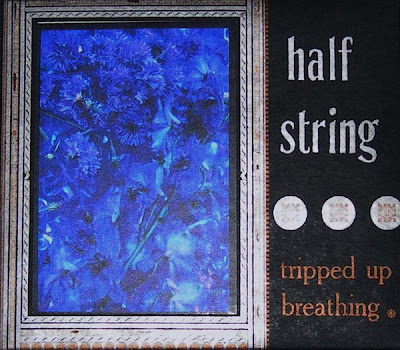 If you had to choose one Half String track that was the ultimate definition of your sound, which would it be and why?

Hmmm. That’s impossible to answer. Every song speaks for a certain time and mood. I’d hate to orphan all the other songs by choosing just one. Though, the recordings that intrigue me most, are these boom box tapes of our final rehearsals in 1996. We were starting to discover some new territory through improvising these super moody and melodic odysseys. It’s a shame we never got in the studio to capture that material properly.

Can you tell us a little about the your song writing process?

Half String would rehearse 3 afternoons a week, and we spent most of our time improvising to develop ideas for new songs. I would end up singing gibberish for the vocal melodies and work out lyrics after the fact—I was comfortable with this method thanks to hours of singing falsetto along with Liz Fraser when no one was around. Most sessions were documented with 4-track cassette, and there are some interesting recordings of us giving birth to songs like Hue and Brief As Photographs. There are a load of songs that never made it beyond those rehearsal tapes. I recently digitized some favorite moments and will hopefully be making them available soon.

Listening to Primal Scream’s “Higher Than The Sun” usually helps put things right when life gets out of hand.
Posted by When The Sun Hits - All things shoegaze. at 8:57 AM