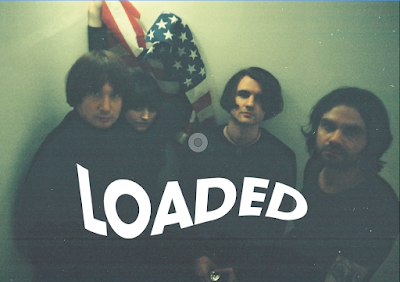 Raissa Pardini plays drums with UK quartet Loaded, whose demo last year for “Little Girl” immediately captured our affections with its perfect breezy Velvet Underground haze and attitude. It’s not a coincidence that the three gents who comprise the rest of Loaded—Jack, Henry, and Louis—all share the surname Wickett-Padgham; they are brothers. The band recently premiered the video for “Solitude,” the first single from an upcoming debut EP. Many thanks to Raissa for answering a few questions for WTSH. 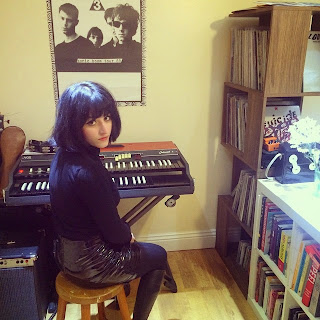 Raissa, how long have you been drumming? Do you play any other instruments?
Hi! I got trained as a piano player when I was eight and I kind of tried to play anything I could since then really. Piano gave me technique and rhythm, discipline and joy towards music. I still love playing piano scores, it makes you feel great, as it feels like you are part of the instrument. My dad taught me how to play bass a few years later and bought me a Cort. Then I bought an electric guitar off a friend and started playing power chords, similar to blues riffs, and little britpop melodies. I can play the flute and the trumpet a little bit but wind instruments I'm not very passionate about.

I eventually started to join some bands and was attracted to the drums. It was a new world for me that I hadn't experienced before. Early on, I would find myself playing drums while everyone was out of the practice room for a cigarette. I joined a band as drummer for a few months while I was living in Berlin a few years ago, but we were pretty punk, it was easy. I started being a proper drummer just when Loaded formed, less than a year ago.

How did you get connected with Loaded? Had the three brothers been working together as a group for a long time before you joined?
They have always been doing music together. They used to be in another band before and they were looking to do something closer to the music they were currently listening to, so they decided to start practice on a new music project, looking for a drummer, which is always a pain...ha. They couldn't find anyone for months. But being in the same circle of friends made us connected and I eventually met them and told them I could give it a go. I was playing organ in Charles Howl before Loaded and I was looking for a different band. It seemed like perfect timing.

What’s it like being in a band where all the other members are siblings?
They've been friends for so long that they have created an honest and clear confidence with each other. Confidence means communication and communicating helps the band in the process of making things better through constructive criticism. On the other hand, I was new to this language when I first joined them, so I needed to know them better to be part of it. It all worked well in the end.

Tell us about the current single. How did “Solitude” come together as a song? What prompted the band to pick that track for the upcoming video? Any cool stories or fun had that you could relate about the process of doing this video?
Solitude was like a different page to the songs we recorded when we started. It sounded so loud and heavy and it was what we were looking for, more of a representation of our live shows. A good song to be released as our first single. It feels like the right song to show what we are worth, the right chance to get back in a studio and prove our talent. It has all the influences we love most, a punk attitude played through a repetitive melody.
Jack, our main guitarist, made the video so it was fun to follow his updates. We would all sit in the living room drinking on weekends and listen to our new records and he would just tell us, "Oh, by the way, I worked more on the video today, want to check?" Ha. Of course we would, people die when curiosity goes!

Can you tell us about the upcoming EP? When can we expect that?
We are recording now our last two tracks of the EP. It will be out soon. It will be called Starside.
Posted by When The Sun Hits - All things shoegaze. at 9:37 PM