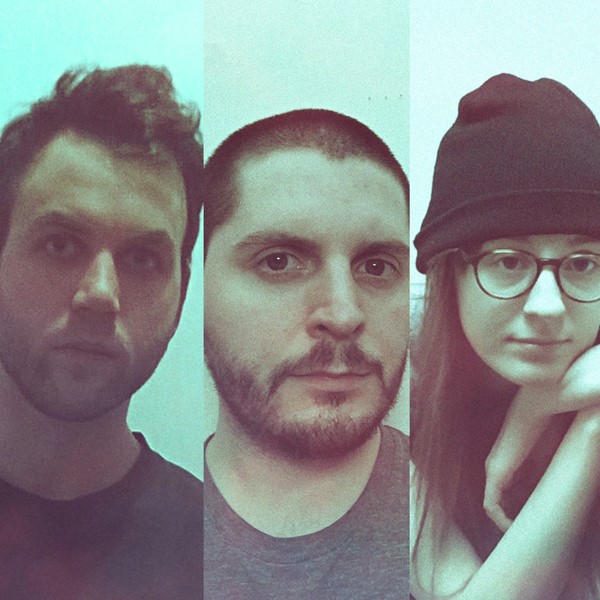 Lazy Legs is the Chicago-based trio of Laura Wagner (vocals/bass), Michael Tenzer (vocals, guitar) and Nicholas Piontek (drums). This shoegaze/noisepop group is one of our favorite up-and-coming bands of the year – their exceptional debut LP, VISIONDEATH, will undoubtedly land in the uppermost regions of our Best Records of 2016 list.

On VISIONDEATH, Lazy Legs crafts a sound that is exquisitely immense in both volume and creativity. Each song is an intricately constructed pop gem, noise-drenched and massive. The album’s lush melodies and ethereal vocals weave expertly through the dense layers of distortion, and the result is a perfectly balanced sound that is both utterly pop and distinctly experimental.

How and when was the band formed?
We decided to start messing around with what would become Lazy Legs in the summer of 2014, in Chicago. At the beginning of 2015, we asked Nick, our drummer, to start helping us flesh out songs.

Can you tell us what the band has been working on and what you've got forthcoming in the near future (any new releases, tour, etc.)?
We recently put out our debut full length album, VISIONDEATH, and are super proud of how it turned out! Now we are focused on playing live shows around Chicago this fall. Our first show will be at the end of September. Also, we are planning on doing a split with Tennessee-based shoegaze band, LACING. No set date as of yet, but we are excited to combine forces with a band that is so good at crushing, heavy gaze.

Do you consider your music to be part of the current shoegaze/dream pop scene, or any scene?
We feel that the idea of music scenes has changed with the advent of the internet. In the past certain types of sounds were associated with a specific point of origin (like ‘90s grunge in Seattle), now they are more fluid and ephemeral. We identify with the global shoegaze community in a general way, but think it’s ultimately more of an a la carte experience, where you pick up fans and fellow bands that share similar tendencies within the genre.

Defining one's sound by genre can be tiresome, but do you feel that the band identifies closely with any genre? How do you feel about genres in music, in a general sense?
We absolutely embrace that we are predominantly a shoegaze band, but we never shy away from elements of grunge, noise and noise pop. Bottom line, we love to mix heavy music with soft vocals. Genres are kind of always a mixed bag. On one hand, genres can inspire people because they give a name to a particular type of sound and they offer a commonality among people who like that sound. On the other hand, obsessing over a genre and its foundational definition can be very limiting.

What is the most important piece of gear for your sound? Any particular guitars/pedals/amps that you prefer?
We wouldn’t say there is one piece that is most important. Laura uses a Fender Jazz bass for clearer definition in her basslines while maintaining depth. She found the Jaguar bass to be too muddy. Michael uses a Fender Jaguar HH guitar, which has a pair of double humbuckers for that heavy distortion. Michael uses a Rat 2 and Big Muff in conjunction. The Big Muff for cakey distortion, the Rat 2 for highlighting lead/middle tones.

What is your process for recording your music? What gear and/or software do you use? What would you recommend for others?
It’s a bit of a fragmented process where we’ll come up with a chord progression on guitar or a bassline, add in some tentative drums and then proceed to sit on the song for several days and sometimes weeks. During the course of this time, vocal melodies start to be shaped autonomously. Then, we bring all the elements back together and refine it all as best we can.

For recording, we use a Line 6 UX2 interface (which comes with a lot of handy guitar and bass effects) and an old version of Sonar. Nick sends us his drum performances separately (he lives in New York). That’s about it – we like to keep it simple.

When it comes to label releases versus DIY/Bandcamp and the like, what is your stance, if any?
I (Michael) feel like the music “industry” is so democratized and fragmented these days that the historical idea of being signed to a major (or even major indie) label and the tangible benefits that would follow are just that, a historical idea. These days, you can blow up and become an internet sensation from a clunky lo-fi bedroom recording and, on the other side of things, you could pump thousands of dollars into equipment, production, promotion and touring but still wallow in obscurity forever. Personally, I love that. It’s a real equalizer that keeps everyone humble in spite of themselves.

I tend to lean towards Bandcamp/DIY because you get the purest and most direct expression from the artist. But there are benefits to micro labels, too. Since there is just a gargantuan amount of music flooding the internet every day, it’s good to have micro labels filter through it and curate releases that speak mostly to their niche audience.


Do you prefer vinyl, CD, cassette tape or mp3 format when listening to music? Do you have any strong feelings toward any of them?
We enjoy cassettes because the sound naturally bends due to the format, giving it a unique intimacy. Vinyl has a nice warmth to it as well. As for CDs and MP3s, we are ambivalent. Of course, it’s hard not to appreciate the convenience of MP3s.

What artists (musicians or otherwise) have most influenced your work?
My Bloody Valentine, Smashing Pumpkins, Sonic Youth, Whirr, Ringo Deathstarr, No Joy.

What is your philosophy (on life), if any, that you live by?
Dogs!