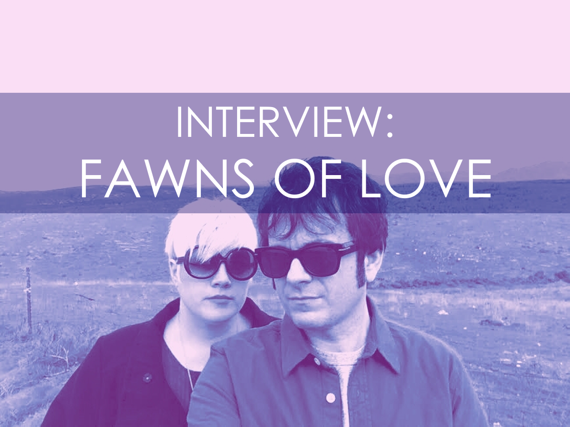 Fawns of Love is the California-based husband and wife duo of Jenny and Joseph Andreotti. While Fawns of Love is still a relatively new project, the couple has been playing music together for 10+ years. Their intimate history shines through in the music, which radiates a natural beauty and warmth that sets them well apart from the crowd. True dedication to a dreamy lo-fi aesthetic is combined with glittering textures, skillful guitar work and gorgeous vocals -- and the results are stunning. The duo's forthcoming debut LP, Who Cares About Tomorrow, is set for release on March 3 and was mastered by DKFM's own Greg Wilson. A shimmering lead single, entitled "Silly Boy", has been keeping us sated as we anxiously await the album's full release. You can listen to that single below. Get to know Fawns of Love -- they're about to make a splash.

How and when was the band formed?
Joseph: Fawns of Love formed during the summer of 2016. Jenny and I have been together for seventeen years now and we have been performing music ever since we met. We had taken a hiatus while Jenny was getting her MA and making music on my own or with someone else was not an option (it would have not gone over well with Jenny). Once we began again we thought that our new music needed a new name.

Can you tell us what the band has been working on and what you've got forthcoming in the near future (any new releases, tour, etc.)?
Joseph: We just finished our debut full-length, Who Cares About Tomorrow. It will be out on cassette and in digital formats on March 3rd. We will be performing two cassette release shows here in California on February 11th at the Echo Park Film Center in Los Angeles and March 11th at Sandrini’s in Bakersfield. We will also be featured on The Blog That Celebrates Itself’s Slowdive tribute album performing a cover version of “Alison,” which will be released on February 14th.

Do you consider your music to be part of the current shoegaze/dream pop scene, or any scene? Defining one's sound by genre can be tiresome, but do you feel that the band identifies closely with any genre? How do you feel about genres in music, in a general sense?
Jenny: We feel like we have really been embraced by Greg Wilson, DKFM, The Shoegaze Collective, Primal Radio, Shoegazer Sanctuary, and by writers in the genre such as yourself and The Blog That Celebrates Itself, and for someone who has always felt like an outsider her whole life, it’s really nice. People have been telling us that we are a combination of shoegaze, dream pop, and post-punk. I think that sums it up nicely. I like genres. I think they are like clothing, a way to express yourself. In high school I really believed I could say I liked Britpop and that would define who I was. I think it still does. I like the Jesus and Mary Chain; therefore my hairstyle is explained to the initiated.

What do you think of modern shoegaze/dream pop/psychedelia artists, any favorites?
Joseph: Your blog, DKFM, and Shoegazer Sanctuary have led me to discover so many amazing new shoegaze, dreampop, and psychedelia bands. I think that so many of these modern artists have pushed the genre forward without leaving the past, and it is truly inspiring. I have been listening to VHS Dream, Cigarettes After Sex, Be Forest, The Stargazer Lilies, and Whimsical to name a few.

What is the most important piece of gear for your sound? Any particular guitars/pedals/amps that you prefer?
Joseph: I play a Warren Ellis signature Eastwood tenor guitar. Jenny and I watched Grinderman play a while back and could not figure out what Warren Ellis was playing. It looked like a bass, but sounded like a guitar. When I got home I looked it up and purchased it. Another important piece of gear that is essential to our sound is our AKAI X-360 reel-to-reel. We used it recording our record and we also take it to shows to play our backing tracks. We got inspired to get one after watching all of the Cocteau Twins’ performances on YouTube. We bought it from our friend Ronald’s record store here in Bakersfield. If you are ever driving through the Central Valley make a stop at his record store, Going Underground. He also releases a lot of amazing music on his various record labels.

What is your process for recording your music? What gear and/or software do you use? What would you recommend for others?
Joseph: We record using our reel-to-reel and Logic. My friend’s reggae band, The Capsouls, inspired us to use the reel-to-reel. He knows vintage equipment very well and is a master in creating warm, thick sounds. I am not sure if you know this but you had posted a Verve live performance on your Facebook feed and had mentioned that Greg from DKFM had mastered it. We had just finished mixing our record and were at a lost about who to have master it. As soon as I saw your post I messaged Greg. He did a fantastic job, so thank you too! Not to keep going on about the reel-to-reel, but I would recommend it to anyone. It is a lot more hands on and is a lot of fun to use in the recording process.

When it comes to label releases versus DIY/bandcamp and the like, what is your stance, if any?
Jenny: Don’t get me wrong, I love that anyone around the world can put their music on Bandcamp and be heard; however, if 4AD, Matador, Saint Marie, Slumberland, or Flying Nun Records came knocking at our door I would literally be running through a field of daisies with bunny rabbits in my arms and fawns prancing behind me. You know that scene in Father Ted where it talks about Father Jack being at peace with the world during leap years and he’s playing with children and puppies? I’m pretty sure it’d be like that.

Do you prefer vinyl, CD, cassette tape or mp3 format when listening to music? Do you have any strong feelings toward any of them?
Jenny: I prefer music videos. One of my favorite things to do is to watch Sparks’ music videos with headphones on while drinking coffee. I not only want to hear the Mael brothers, I want to see them too. The absolute best music listening experience I have ever had was when we saw Grinderman, and Nick Cave grabbed my desperate flailing hand (it was an audio, visual, tactile orgasmic experience that I will never forget, and he has such soft hands).


What artists (musicians or otherwise) have most influenced your work?
Jenny: I think Ronald Mael is the best lyricist of all time, and no one can touch Russell Mael vocally (and he’s just a super handsome guy with impeccable style who wears a scarf like no other). “Equator” from Kimono My House is proof that vocally Russell Mael is untouchable. Not to mention, Sparks were really the first to make being an unconventional duo acceptable, at least that’s what they say so I believe it. I also love Jim Reid’s laidback breathy vocal style. When it comes to sex appeal he’s it really, and I am always a sucker for filthy lyrics (“Teenage Lust,” need I say more). I know it’s shallow or whatever, but I am inspired by really good-looking guys with shaggy brunette hair that can sing.
Joseph: I am influenced by Slowdive, MBV, The Jesus and Mary Chain, and New Order.

What is your philosophy (on life), if any, that you live by?
Jenny: I lost a brother from cancer when I was fourteen, and I had another brother commit suicide when I was in my early twenties, which has shaped my life philosophy. Although I do battle depression, I also can’t stand pettiness and negativity. The idea someone can get hung up about not getting the right car, phone, or house pisses me off really. It shouldn’t be about the shit you accumulate it should be about the people you meet and the experiences you have.  Also, there’s no need to be an asshole. Life is too short to be a dick (as Shakespeare once said I think).

Any additional comments for us?
Jenny: I love you Russell Mael.
Joseph: Thank you Amber.