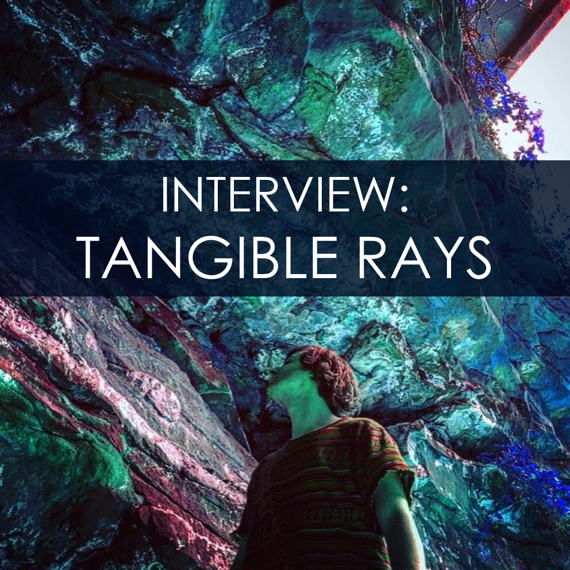 Tangible Rays is the solo project of Rob Fiorenzo, who is based out of Youngstown, Ohio. Fiorenzo released his sophomore LP, Séance, on the first day of 2017 and we literally haven’t stopped listening to it since. Stylistically, Tangible Rays’ marries a lo-fi shoegaze aesthetic with psych-tinged pop, and the results are brilliant. Nuanced and intricate melodies are woven throughout the songs, ebbing and flowing in tandem with a larger soundscape that is replete with energy and atmospheric fuzz. There are so many positive things to say about Séance, but for me, the melodies shine the brightest of all. If you haven’t heard Tangible Rays yet, the time to remedy that is now. We are thrilled to share the following interview with Rob of Tangible Rays with you.

How and when was the band formed?
It was formed as a band that only existed in my head during the winter of 2014, called Grow House. I later changed the name to Tangible Rays, which is actually a secret anagram. I wrote about 9 songs and recorded them on a Tascam 4 track cassette recorder, with me playing each individual part. This became my first LP, Grow House. Since then I have acquired much better recording equipment, thankfully. I took this same one-man-band approach when recording the tracks for Séance, with all the instruments and vocals done by myself. It is a lengthy process, it took about a year and a half to complete Séance.

Can you tell us what the band has been working on, and what you've got forthcoming in the near future? Any new releases/tours/etc.?
To be totally honest, I'm really still in the process of building a fan base, and shopping Séance around to whoever is willing to take the time out of their day to listen to it. Right now, the album is touring for me in a way. In my opinion, it wouldn't really make sense to attempt a tour without a decent size fan base waiting to receive it. That's really what I'm working on right now.

Do you consider your music to be part of the current shoegaze/dreampop/psychedelic scene, or any scene? Defining one's sound can be tiresome, but do you feel that the band identifies closely with any genre? How do you feel about genres in music in a general sense?
This is kind of a touchy thing right? I mean, usually scenes sort of play themselves out over time, or become parodies of themselves, which is even worse. I can't really say that I set out to make music with the intention of being lumped in with any sort of scene. I really just wanted to take elements from various genres that I enjoy and make the kind of music I had always been looking for but was never able to find. To fill a void, rather than fit in. Genres are sort of necessary, in terms of being able to categorize music. But beyond that, who cares. I don't think I've ever intended to be identified as one genre, or to be thrown into a box. But it's sort of unavoidable. I am mainly labeled as a psych pop/ shoegaze artist, and I'm fine with that.

What do you think of modern shoegaze/dreampop/psychedelic artists? Any favorites?
I love the ones that I feel attempt to bring something new to the table, and try to aid in the evolution of these genres. Because when that stops happening, a genre is dead as far as I'm concerned. I have really been into Pinkshinyultrablast lately. Everything Else Matters is flawless and absolutely thrilling to listen to. Japanese Breakfast too. I was about halfway done with Seance the day they dropped Psychopomp and I was like, "Well, fuck. I should just give up." I really dig Hoops too, who I think recently signed to Fat Possum. Their first three demo tapes are pure lo-fi, jangle pop brilliance. Candy Claws, Wildhoney, Pia Fraus, Cherry Wave, Astrobrite, Woody Grant, and Barlow are a few others worth mentioning. Honeyuck too, even though they're twee pop. But who gives a shit, they're great.

What is the most important piece of gear for your sound? Any particular guitars/pedals/amps that you prefer?
Hands down, one of the most important pieces of gear I own is the Roland Space Echo unit. I used it on Seance in the same sort of way Kevin Shields used the Alesis Midiverb II to create the sonic palate for Isn't Anything. I realize, of course, both units are nothing alike. I mean, the classic shoegaze thing is to get a Midiverb, set it to patches 47, 48, or 49, and there you go. Instant MBV. I really had no interest in achieving that sound. With the Space Echo, I set the tape delay pattern to sync up with the strumming pattern on the guitar, and with that specific length of delay I am able to achieve heterodynes by playing overtop of the delay signal while bending the pitch slightly using the tremolo bar on the guitar. It creates that same sort of wave collision and dissonance, but without using a 100% wet signal and causing all the overhead collapse that the Alesis Midiverb does. Also, the Space Echo is much more classically psychedelic, in a sort of Pink Floyd Piper at the Gates of Dawn sense. The tape loop sucks to change, and to have to thread through the unit, but it's totally worth it.

What is your process for recording your music? What gear and or software do you use? What do you recommend for others?
First I come up with the melody; that is always my main focus. Then I structure chords around it, and quickly record a rough demo of it onto my Tascam Porta02 so I don't forget how it went. Which I would. I have a terrible short term memory. Everything kind of falls into place after that. I record everything in my home studio onto an eight track connected to my TEAC M30 mixing board. It's pretty old, from the late 70's I think. Everything is totally analog. I really can't recommend anything to other artists who are into DIY recording, except to try different things. Find gear that you're comfortable using, and learn how it works. Know exactly how a piece of gear produces that certain sound. That's pretty much it. The TEAC board is a huge part of my guitar and drum sound. I use a lot of compression too. As for guitars, I stick mostly with Fender stuff. I use a Jaguar to record all the thick fuzz guitar parts, and either a Stratocaster or a Mustang for the clean, jangle parts. As far as bass goes, I use a Hofner hollow body violin style bass.


When it comes to label releases versus DIY/Bandcamp releases, what is your stance if any?
As long as a band or artist refuses to compromise who they are in any way to appeal to any label influence, be it indie or a major label, that's great. I admire bands and artists who just want to do their own thing on their own terms. I think that is hugely appealing to DIY artists, the freedom that they inherently have by not being signed. That's kind of where I am at right now with Tangible Rays.

Do you prefer vinyl, CD, Cassette, or mp3 format while listening to music? Do you have any strong feelings toward any of them?
I love vinyl. I cannot pass up a bin or a shelf of vinyl at a record store or thrift store without thumbing through it. I have a pretty decent size collection of vinyl and cassettes. I would REALLY love to put Séance out on cassette. Maybe soon…

What artists have influenced your work?
Syd Barrett-era Pink Floyd was one of my earliest influences. I was huge into their early stuff growing up. I pretty much learned everything about melody and vocal harmonies and how they work from Brian Wilson and The Beach Boys, as well as The Beatles. Like a lot of people, My Bloody Valentine's Loveless changed my life. It totally blew me away hearing that album for the first time. A lot of west coast, weird 60's indie psychedelic rock and sunshine pop is heavily influential on me too, believe it or not.

What is your philosophy on life, if any?
Life's a garden, dig it.

Any parting words?
Just wanna say that When The Sun Hits is a really amazing and eye opening program for me, in terms of introducing me to many criminally underrated new artists, as well as playing a lot of my favorite ones. It's really great. Thanks for having me, this has been really fun!
Posted by When The Sun Hits - All things shoegaze. at 12:14 PM