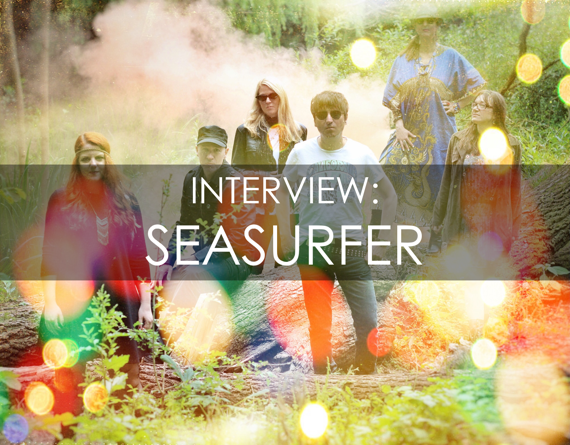 Seasurfer is a German ethereal dream pop outfit launched by Dirk Knight, formerly of Dark Orange, in 2013. The band made a splash immediately with their debut LP, Dive In, via Saint Marie Records in 2014 and have since become a fixture in the scene. The band’s excellent forthcoming LP, Under The Milkyway… Who Cares, is set for release this Friday; you can read our review of the album here. We hope you enjoy the following interview with Seasurfer’s creator and principle force, Dirk Knight.

How and when was the band formed?
I believe it was in 2012 when we did a sound check for my dream-pop band Dark Orange here in Hamburg in a club called "Der grüne Jäger". We performed a fast and noisy song and the barkeep who didn’t know our band came over said: "Fucking great, I thought you were a school band, but that was cool shoegaze stuff". It also felt great diving into a fuzzy wall of sound. That was the moment I decided to start a new band...and Seasurfer was born.

Can you tell us what the band has been working on and what you've got forthcoming in the near future (any new releases, tour, etc.)?
We released our first album, Dive In, in 2014. In 2015, we did a club tour together with Last Leaf Down and The History of Colour TV, performed live at the well-known WGT-Festival in Leipzig, and released a 4-track EP In The Headlights via a successful crowdfunding campaign. Last year we recorded and mixed our new album which will be out this month on the great Saint Marie Records. We have our first live shows in Germany scheduled for the autumn.

Do you consider your music to be part of the current shoegaze/dream pop scene, or any scene? Defining one's sound by genre can be tiresome, but do you feel that the band identifies closely with any genre? How do you feel about genres in music, in a general sense?
I think so… We are growing up in a time when it seems you have to belong to a scene and where music is not only fashionable and background entertainment but filled with attitude and life.  Where you deliberately establish yourself, and have a fellowship. If you know where you are, where you meet like-minded people, then I find only good can come from it. I don’t have to like everything I hear and find all bands good, because then everything becomes arbitrary and mainstream.

What do you think of modern shoegaze/dream pop/psychedelia artists, any favorites?
I really like a lot of the newer bands, I am in touch with Daniel and Dani of Malory who stopped making music as this great band, what a shame, Krissy and Neil of Whimsical, Rebecca of The Emerald Down or Karl and Chris of Spotlight Kid. All cool people and bands. My favorites are Ringo Deathstarr and Pinkshinyultrablast. My friend and booker Benny is also working with these guys, so I hope we can play some shows together someday.

What is the most important piece of gear for your sound? Any particular guitars/pedals/amps that you prefer?
A Fender Jazzmaster, a Roland Jazz Chorus 120 amp, of course. I think I mostly use the DeviEver Shoegazer Fuzz-pedal, a Boss Heavy Metal, a Memory Man and the Death by Audio Echo Dream at the moment. However, I often switch to other pedals.

What is your process for recording your music? What gear and/or software do you use? What would you recommend for others?
I start with a lot of layered guitars, like painting, but only with sound. Then put it all together. This is the best moment in making music I think, when it all comes together. When you work with great vocals with a cool singer and get the feeling that it will be a great song. I now have my own small studio and can work on whenever I want to when I want to. I am working with Logic, some plug-ins, but still record with using real pedals.  Recommended for others; create your own stuff, be as independent as possible and above all, find your own sound!

When it comes to label releases versus DIY/bandcamp and the like, what is your stance, if any?
I am old fashioned...I worked with the German dream pop label Hyperium for years, with Seasurfer I’m so happy with Wyatt Parkins/Saint Marie Records. I need and love this kind of community, but I can only work with labels who are also fans. Wyatt is cool and has become a friend over the years. Saint Marie has now created their own guitar pedal and I can’t wait to get mine. That`s how it should be.

Do you prefer vinyl, CD, cassette tape or mp3 format when listening to music? Do you have any strong feelings toward any of them?
I still buy CDs of my favorite bands, I need the haptical stuff. I don’t use Spotify and love my old portable CD-player. I also love vinyl because of the space for the artwork and also the smell of it.

What artists (musicians or otherwise) have most influenced your work?
Robin Guthrie of the Cocteau Twins and Robert Smith of the younger the Cure. Maybe also Greg Sage of the Wipers and Bob Mould of Hüsker Dü. The first time I was talking to Robin I was really nervous but he is cool and friendly...only if he speaks quickly with his Scottish accent, then it becomes a little difficult, haha. I still remember a Wipers show here in Hamburg in the mid-eighties in younger years... a tremendously explosive and goose bumps, very intense.

What is your philosophy (on life), if any, that you live by?
I grew up in the eighties and nineties when music and life belonged together, when it all was some kind of attitude, also political, but also a great adventure. When you got beat up because of the way you look. However, also a time when you could discover a lot. I still remember going to London on the ferry boat here from Hamburg, hanging around in clubs and record stores, looking for all this stuff you only got there. Drinking in clubs here in Hamburg with all the pretty girls who look like Siouxsie. When I am work in music today, I still feel like a boy and still have a last trace of that feeling.
Posted by When The Sun Hits - All things shoegaze. at 1:01 PM