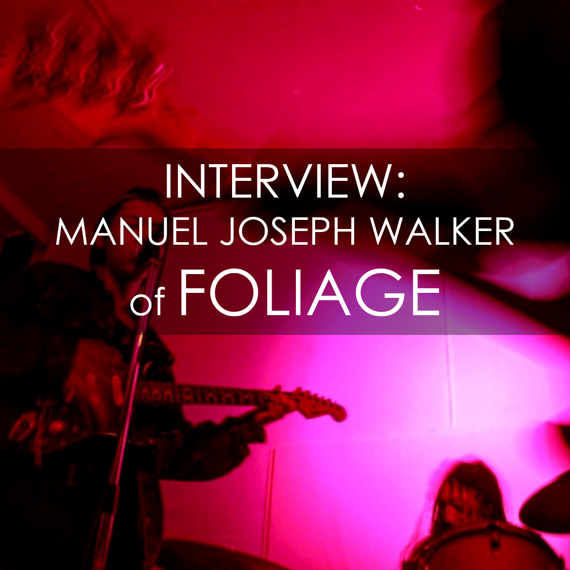 We first became aware of the band after the release of debut LP Truths in 2015. The songs were well-crafted and intelligent, and the lo-fi janglepop sound was easy to love. Little did we know, Manuel was only 16 years old at the time, making the debut even more impressive. On Silence, the newly released sophomore offering, Foliage has honed their signature sound, with each aspect of their songcraft sparkling just a little more brightly than before. The approach to production is more incisive, and there’s a new maturity, clarity and depth to their sound. We highly recommend that you check out Silence, and we hope you enjoy getting to know more about Manuel through the following interview.

How and when was the band formed?
When I was 16, I put out a song called “The Things I Do for Love”. A few friends of mine really liked the song, so I decided to write an album. I hit up my homie Alex about playing guitar in the band if Foliage were to ever become something. We got the band together and played a series of shows throughout 2015, following the release of Truths, the debut album from Foliage.

The band has gone through quite a few lineup changes, but Alex Lara has remained the guitar player in Foliage. I like to handle the songwriting and the recording/production standpoint of Foliage, but the band consists of Anthony Walker on bass guitar, Alex Lara on guitar, Ethan Rodriguez on drums, and myself on vocals and guitar.

Your sophomore LP, Silence, just came out. I love it! How do you think it compares to your first album (which I also adored)? Did you use any new recording techniques or approaches in general this time around?
Thank you very much, glad you're enjoying it. I'm also glad you loved Truths, as well. I think Silence is definitely a better record. Truths is more or less just the average dream pop record, full of melancholy songs longing for love. It's a great debut, but it's nothing very special or unique in anyway in my opinion.

Silence is a much different and more mature record. I feel as if Foliage has made a name for itself with not only the songwriting, but the distinct sound and production on the new record.  I went for a cleaner sound with Silence; I wanted people to hear the lyrics and feel all of the instruments, without a wash of reverb, while still remaining as ethereal as possible, if not moreso.


Do you plan to tour for the new record? If so, when?
Yes, we plan on touring the new record. We're not sure when to be exact. We've got a good amount of dates here in California throughout August so we're hoping for September and onwards. If anybody reading this would like to help us book dates, feel free to reach out! We do this all by ourselves, so I'd love your help and be most grateful.

Do you consider your music to be part of the current shoegaze/dream pop scene, or any scene or genre?
Yeah, I'd say so. Sometimes I get very distraught with our local scene. We're not the most popular band, but we definitely stand out. It's cool to think, “Hey, even though we're not doing so great here, there are others all over the world who love my music.” That's enough for me, really. As far as identifying with a genre – I'd say we're an indie band, but I feel like jangle pop fits very fucking well.

What do you think of modern shoegaze/dream pop/psychedelia artists, any favorites?
I wouldn't really say some of these fit in the shoegaze/dream pop category, but these bands definitely deserve your attention: High Sunn (my boy, I love him to death), Group Photos, Futanari Masterrace/Spencer Cohen, Vansire, Processions, Houseplants, No Vacation, and Lunar Eskimo/Hank LW.

My chorus tone is probably the thing I critique the most, no pedal has been able to come close to it. The closest form I've had of this is the Boss CE-3, but still, I always return to my amp for the signature Foliage tone.

What is your process for recording your music? What gear and/or software do you use? What would you recommend for others?
My process is simple. I use this really old computer that my dad gave me. I use Ableton Live 9 to record and produce all of my music. I do it all at home in my room. I recorded live drums for the new record, chopped, then sampled them into a drum machine for all of the tracks on Silence. All of the guitars are done direct-in, including the bass. The bass on the recordings is actually just a guitar pitched down a full octave. I had recorded with bass prior and mic'd amps, but it didn't fulfill the sound I had envisioned. I spent over two years on this record, and wrote over 100+ songs for it.

When it comes to label releases versus DIY/Bandcamp and the like, what is your stance, if any?
Do it yourself, always. If label, find the cool labels, ones that are actually about the music, not here to make some quick cash off of you. Shoutout to Spirit Goth Records for being real as fuck. Much love to Josh and the team. I'm a huge Castlebeat fan, as well, and I'm honored to have released Silence on the Spirit Goth.

Do you prefer vinyl, CD, cassette tape or mp3 format when listening to music? Do you have any strong feelings toward any of them?
I really love listening to vinyl honestly, just because impatience ceases to exist. You can listen to a whole record, and flip it over, and actually take in that listen. Rather than viewing something digitally, seeing the wave forms, seeing how long the song is, getting bored and skipping it. It's all about catching that attention. I made sure to make the album interesting enough for both the digital release and the physical releases.

What artists (musicians or otherwise) have most influenced your work?
I'd say The Smiths, probably. I really love Johnny Marr and his songwriting. True genius. Really big fan of Morrissey, as well. Heard The Smiths for the first time when I was in like 5th grade and was hooked instantly. Listening to The Smiths, earphones full blast, always gave me goosebumps growing up.

What is your philosophy (on life), if any, that you live by?
My outlook on life is: Give respect where respect is due, always be real. No fake smiles, only real love.

Please add whatever additional comments you would like here:
I love you all. I hope you enjoyed reading this. Please buy Silence, come to a show, help us book shows, let us know you love us, it means a lot to me. You don't even know. You all mean the world to me.