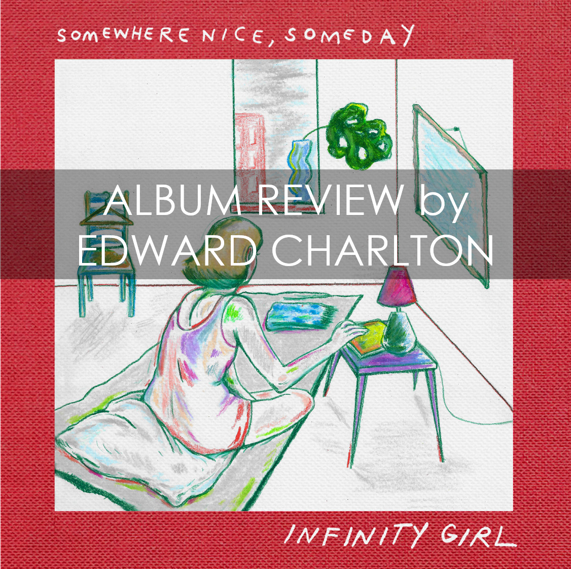 Few releases of the past year were met with such a conflicting cocktail of jubilation and heartbreak as Somewhere Nice, Someday, the latest and final album from Brooklyn-based guitar manglers Infinity Girl, following 2015’s excellent Harm. The band—comprised of Nolan Eley (guitar, vocals), Kyle Oppenheimer (guitar, vocals), Mitchell Stewart (bass) and Sebastian Modak (drums)—announced before the drop that the latest collection would be their last. Somewhere, recorded before the band decided to retire, delivers as the greatest example of what the group have excelled at over their lifespan in a fitting final statement.

Opening drum-less strummer “The Comfort of What I Had” sets the overall mood. While a pensive and regretful introspection colors the entire track, the repetition of the chord changes and Eley’s diaphanous vocals find a thorny beauty even in the song’s most bummer moments.

Second track and single “But I’m Slow” brings in the rest of the band for a downcast singalong featuring the layering and upfront detail that characterized Harm. While many shoegaze and dream-pop bands have mastered studio craft, Eley and company always seem able to take it one step further. On “Slow” the range of frequencies in the fuzz pedals are so full and immediate that their textures seem tangible beyond the speakers. The album lends itself well to hi-fi listening, with a level of subtle detail that repeatedly impresses and rewards.

Infinity Girl imbue their compositions with many little dynamic shifts in a way that lends complexity and freshness even to basic song structures. Check out, for instance, the slow upward wave of volume at the twenty-second mark that precedes the final downstroke into the first verse of “Slow”. Eley’s declarations of exhaustion in the chorus are sung with such hushed breathlessness that they can be heard as foreshadowings of the band’s end, which came about because the project had become too demanding to leave enough space for the rest of the musicians’ lives.

Quicker numbers like “Don’t Believe, “Derail Me” and “Redder” show the band’s roots with frenetic, punky blasts of noise inspired by Isn’t Anything-era My Bloody Valentine and Boston’s mighty Swirlies. These songs contrast well with the more experimental and explorative pieces on the album, anchoring the band to the DIY, house show tradition from which they arose.

“The Color of Wine” brings in a surprising dash of twee acoustic guitar picking before blooming into yet another swooning pop tune. “Anything” takes the misty weightlessness of Infinity Girl’s more ethereal pieces to its most lilting, airless expression.

Closer “The Winner Always Talks” brings in a dash of celebratory piano to mingle with bleak mantras and noise breakdowns. The final wind ups of guitar and crashing drums create an expectation of one final lap for the gang, but of course it can’t be that simple, as the track is then cut off by an ending too abrupt to permit any real sense of closure.

Somewhere Nice, Someday so fully solidifies Infinity Girl’s unique, twisting and contradictory character that one can only be thankful for it even as a last release. The band have clearly not just “thrown in the towel", but loudly and confidently ended on their highest note.

Somewhere Nice, Someday was released by Disposable America in a sold out cassette edition in September. It’s now available as a name-your-price download on Bandcamp.
Posted by When The Sun Hits - All things shoegaze. at 1:05 PM