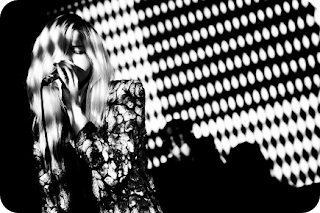 When The Sun Hits
Interviews
Tessa Murray
of
Still Corners


London-based Still Corners is the musical project of songwriter/producer Greg Hughes and vocalist Tessa Murray. After releasing the excellent Remember Pepper? mini-album in 2008, the duo signed with record label Sub Pop in 2011 and released their debut LP, Creatures of an Hour, which immediately got the attention of underground music lovers everywhere, especially those with a penchant for well-crafted dream-pop compositions shot through with what their record label calls “sugared layers of shoegazing-infused retro-futurism” (we definitely have more than a penchant for this sound).

After self-releasing the single “Fireflies” in October 2012 (which was named “best new track” by Pitchfork), Still Corners then issued their sophomore album, Strange Pleasures, via Sub Pop in May 2013. Strange Pleasures features a more stripped down version of their signature dream pop sound, occupying the sinuous space between the otherworldly beauty of genre icons Cocteau Twins and a starker sound permeated with icy synth work and exquisite pop arrangements reminiscent of classic 8os dark wave. To say that those of us here at When The Sun Hits are huge fans would be an incredible understatement – Strange Pleasures is most certainly high on our list of top releases of this year, and we couldn’t be more excited to share the following interview with Tessa Murray, extraordinary vocalist and one half of the incomparable Still Corners.

How and when was the band formed?
Still Corners was formed in very late 2007 when Greg put out an EP called Remember Pepper?  He put together a live band which was out and about playing shows but Greg was still looking for the right singer...

Fast forward a couple of years and Greg and I randomly met on a train platform after our train failed to stop at its allotted stop.  Faced with a long 20 minutes before the train back up to London Bridge, I got talking to Greg about life, films, books and music.  I told him I would miss choir because of our detour and at the end of the journey we agreed to meet up.  After a while I started helping out on the demos and eventually it seemed clear that I should join the band.

Can you tell us what the band has been working on and what you've got forthcoming in the near future (new releases, tour, etc.)?
We've been playing lots of shows the last couple of months and are also working on new songs.  We've had lots of ideas so hopefully it won't be long before we can put some new music out there!

Do you consider your music to be part of the current dream pop scene, or any scene?
I guess we identify with the dream pop scene in the sense that some of our music has a dreamy quality but our main focus is just on writing songs that we can feel proud of.  I think it would be a shame to be so closely identified with a particular scene that it stopped you from trying new things and pushing the boundaries of what you can create.

Defining one's sound by genre can be tiresome, but do you feel that the band identifies closely with any genre? How do you feel about genres in music, in a general sense?
We were discussing this on the road the other day.  It's funny to be constantly classified as a particular genre when your influences go so much wider than that.  Yet it is natural for people to define music as a specific genre and it is very rare for a band to be genre-less or for their music to define their own genre.  In that respect, I don't think we could deny that we are making pop music and that often it is dreamy.

What do you think of modern dream pop, any favorites?
I think Beach House stands out, particularly Teen Dream, I go through phases of listening to that record on repeat. 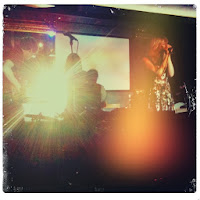 What is the most important piece of gear for your sound? Any particular guitars/pedals/amps that you prefer?
We use the Manley reference cardioid microphone, combined with an Inward Connections Brute compressor for my vocals.

Can you tell us a little about the band’s song writing process?
Greg will normally start with a drum beat, chord pattern or guitar riff and he'll build the song around that.  We'll work together on the vocals and throw ideas around about the arrangement and make many, many tweaks before being happy with the song and letting it rest.

How do you feel about the state of the music industry today? There is no doubt a massive change underway; how do you see it and do you feel it’s positive at all?
It's an interesting time in the music industry and I think people are still trying to work out how to get a business model together that works for the industry and artists.  As a UK band based in London, we find it difficult to live in the city and would love it if, as well as being lucky enough to work on our music, we could make a bit more money from it too.

That being said, there are many advantages to music being more readily available.  I'm sure more people have discovered our music than may have done in the 'old world' and the nature of the internet means that new people find out about our music every day, regardless of it being in line with a single or album release.

When it comes to label releases versus DIY/bandcamp and the like, what is your stance, if any?
I think it's great to have the option to do both if you can.  Being signed to Sub Pop has opened up more doors and enabled us to visit the US more times than we probably could have afforded to on our own.  They have also been flexible, allowing us to release the Fireflies 7" on our own, we've been lucky to do a bit of both.

Do you prefer vinyl, CD, cassette tape or mp3 format when listening to music? Do you have any strong feelings toward any of them?
I like the art and beauty of vinyl and the ease mp3s. CDs remind me of teenage trips to the local record store where I grew up and cassettes of early recording attempts on my Fisher Price recorder when I was five.  Each has its own place for me. 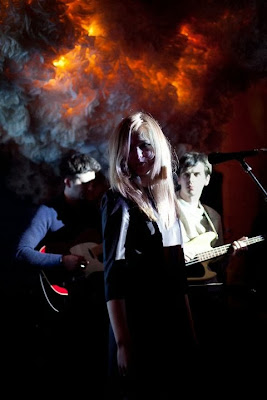 What artists (musicians or otherwise) have most influenced your work?
I used to listen to Nick Drake over and over when I was at university, the simplicity of those early recordings so filled with emotion will always stay with me.  I never imagined that I would sing in a band, I look to other women for strength and inspiration.  Joni Mitchell, Kate Bush, Elizabeth Fraser - amazing vocalists to surround yourself with.

Can you tell us a little about what you are currently into (books, films, art, bands, etc.)?
I've been reading Hilary Mantel's Wolf Hall on the road.

A little bit of dark English history is perfect for long road trips.

If you had to choose one track that was the ultimate definition of your sound, which would it be and why?
Strange Pleasures, from Strange Pleasures.  It's dark, atmospheric, and brooding.

What is your philosophy (on life), if any, that you live by?
Go confidently in the direction of your dreams.  Live the life you have imagined.