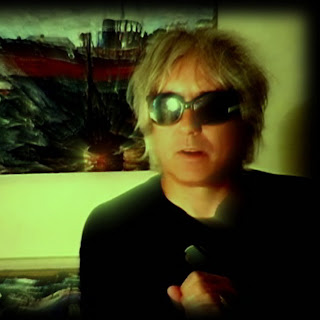 Mark has been someone, for a very long time, whom I have had a lot of respect for as a musician and a lyric writer. He has such a special and magical way of making a person feel through his songs. My first exposure was The Lucy Show album Undone (1985) and I have followed his music career until this day. I think of Mark as a pioneer, never really falling into a huge genre trap and always living through and expanding in his art.

When The Sun Hits Interviews Mark Bandola of The Lucy Show.
By: Rob Turner.

How and when was The Lucy Show band formed? 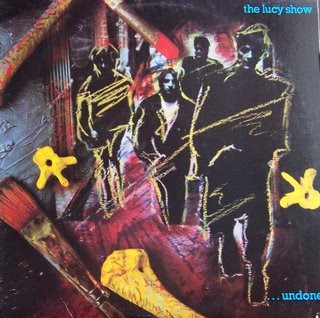 I moved from Canada to the UK in 1978 & worked with other bands & musicians...Robert Vandeven left his native Calgary & joined me in the South London music scene about a year later. We started playing music together pretty soon afterwards - with me, in my primitive way, clueing him into how to play bass guitar for my tunes. We gigged around trendy (& untrendy) small local clubs for a couple of years. In about 1983 Robert was the group's main songwriter, and had the idea to go under The Lucy Show moniker, which I still think is wonderful to this day, although I was timid at first and resisted, like a fool!

Typewriter was an idea to fulfill an ambition I had harbored, for longer than I can remember, to be free to write and record in any musical vein of my choice. I worked on the debut album, Skeleton Key, from mid 2002 until early 2003, and released it in late spring that same year. Birdsnest was released in 2006, and the third album Pictures From The Antique Skip came out in 2010. Somewhere in between all this Typewriter also contributed a version of 'Outdoor Miner' to a Wire tribute CD.

The Lucy Show - Ephemeral (This Is No Heaven) 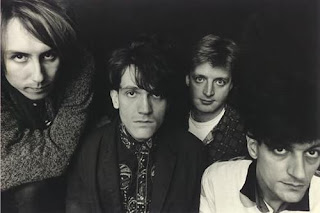 I have always been in awe of Mitch Easter's talent, as well. What was it like working with him on your solo release?

It was a pleasure working with Mitch, and I knew it would be - even before we had gone into his Drive-In studio, because we had a mutual respect for each others' songs, singing, guitar playing and recordings. When we got going, he really saw the songs, arrangements, overdubs, etc, the same way as me, and virtually all his suggestions and contributions worked like magic. We are still in touch, although it's been a while now, but I know he's a fan of the Typewriter albums, and he sent me a copy of his last terrific album Dynamico. He's a bit of a musical wizard and a true star.

Bandola - Til Tuesday (1992)
Can you tell us what the (Typewriter or solo?) band has been working on and what you've got forthcoming in the near future (new releases, tour, etc)?

For Typewriter in 2011 - a new UK company (Mono Records) is releasing 'Impossible Beauty' as a 7" single in September with accompanying video DVD - after that just more recording, all varying styles, some softer than others, some verging on "industrial" sounds - I got a new wah pedal - so that has come into the noise a bit.....but I also got a banjo, so we are off to otherworldly mixtures for the 4th album.

Typewriter is also a working with your wife, Margot, correct?

Margot is a talented multimedia artist & a lot of her work has inspired my music. As well, she has contributed to Typewriter's album covers, with paintings and photographs.

See more: http://www.margotbandola.com/
She also filmed the videos (currently on Youtube) to promote the last LP Pictures From The Antique Skip. She is currently making her own animated/live action film - Typewriter will provide the sounds and music to accompany.
Typewriter - Impossible Beauty

Do you consider (The Lucy Show's or solo or Typewriter) music to be part of the current shoegaze/dream pop scene, or any scene? Defining one's sound by genre can be tiresome, but do you feel that the band identifies closely with any genre? How do you feel about genres in music, in a general sense?

Looking back, I can get an idea of what Jack Rabid quoted in his magazine The Big Take Over: that we bridged some kind of gap between post punk groups like Magazine, Comsat Angels (a group I have never heard) and Echo & the Bunnymen, and up and coming bands like Stone Roses and House of Love (a group I have never heard), but really our sound was some kind of splash/ripple & reflection of the groups Robert Vandeven and I heard in our teenage years.
Typewriter cannot possibly belong to any specific genre, simply 'cause the medium is eclecticism & eclecticism is the message. This does not work in my favor but so it is. 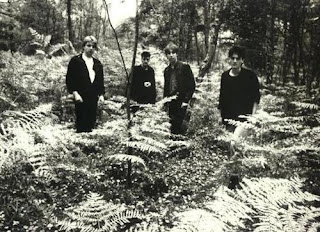 I think - as the good old music industry has grown to its mammoth proportions & the download era rises - there is even more pressure (and label encouragement) on bands, of any genre, to be quickly recognized by their guitars, keyboards, overall style, etc. Way back in the steam age, in the record shop's racks, you would always find James Brown alongside the Beatles, Abba just a few doors along from Amon Duul & the Doors down the road from Dylan. You get the picture. The genres were much more blurred - it was simply a case of contempory music & file under popular. You didn't necessarily distinguish or have to take sides.

Guilty of being not so aware of the modern artists aside from what I have heard from the good folks at Words-On-Music, if what they release is dreampop. A few years ago I was keen on Game Theory/The Loud Family and Guided by Voices, maybe that would be called post-modern psychedelia? Also, old Spaceman 3 music, Spiritualized1st LP, Kid A stuff from Radiohead and a bit of The Cardiacs as well.

For years now I have leaned pretty heavy on the Roland Juno 60 synth, and, I reckon, made it a trademark sound of both The Lucy Show and Typewriter. The other weapon in my arsenal is an antique bit of equipment - a guitar pedal called a Roland JET PHASER AP.7. A truly sizzling overdrive phasing device used pretty heavily by both Ernie Isley (the Isley Brothers) and the late/great Randy California of Spirit. 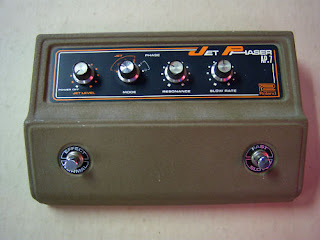 I remember near the release of The Lucy Show's debut LP, a member of our record label/publishing/management team actually saying we were being antagonistic and unreasonable ("who said you guys ever played by the rules?!!") for wanting to include 1 extra song, on our vinyl long player, that would mean 6 songs on side 1 and only 5 songs on side 2!! Something THAT minute!! I think that speaks volumes about the way they CAN think and behave - and probably still do.....although I could be mistaken. I appreciate that they are all terribly overworked & underpaid.

Typewriter - Arctic Circle.
When it comes to label releases versus DIY/bandcamp and the like, what is your stance, if any?

I don't think I got very good breaks with actual record companies. Looking back, I can see that The Lucy Show had a loyal team working for us in America, but we were just scuppered by the UK people. As a lone artist, I would like to have the clout of a label for advertising, and/or distribution but, for now I just have to do the best I can with what I got. 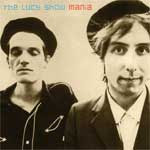 I happily listen to good music in any format available - but I think in era's gone by, the sense of event - physically buying a vinyl record - could bring more excitement just because you would associate the music you were listening to, with the artwork and liner notes from the "record jacket" cover, or whatever was included on the sleeve. Sometimes not very much, sometimes a wealth of info & pictures (even black-light/day-glow posters). The vinyl format allowed such diversity. A bit of a shame that all that sort of lessened with CDs & cassettes, and, of course, has little meaning if you only download music files.

All the usual culprits, starting with The Beatles - particularly Paul - Motown, the whole 60's scene, then The Who, Joni Mitchell, David Bowie & Todd Rundgren, not to forget George Clinton and Funkadelic & The Grateful Dead. I have always liked Miles Davis, Dizzy Gillespie, Louis Armstrong.

The drummer from The Lucy Show first played me Can and I've sort of been a Krautrock devotee ever since. Punk rock was a cool thing, but for me, mainly as a liberation from what was happening in the recent times before it happened. I also love some avant garde stuff like Captain Beefheart, Coltrane's 'Ascension', Steve Reich, even Stockhausen, but, I mean this list could go on and on.... 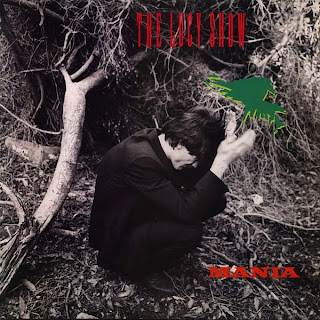 I have been enjoying watching episodes from a box set of the 60's program 'The Outer Limits'. The special effects can be super primitive, but the storylines really shine in some of them. Also, late nights watching Werner Herzog films like 'The Enigma of Kaspar Hauser' and 'Aguirre, Wrath of God'.

If you had to choose one (The Lucy Show's Or solo or Typewriter) track that was the ultimate definition of your sound, which would it be and why?

This is pretty strange to imagine....In Another World from the last Typewriter album could probably sum up the Bandola style that kicked off in the early 1980's and has just hung around until now. My way of shoving chords and tunes together is all in there, I guess. Other folks might think that's not true.

Typewriter - In Another World.
Can you tell us a little about the band’s song writing process?

I wish there was some kind of usual process, then I'd write a load more songs. I just have to hope as I play piano or guitar that some idea entertains me enough. It can be a riff, a piano line, a guitar sound effect, a bass line and a beat, anything. Sometimes it might happen easily and straight away. Other times the inspiration can elude you completely. Oh woe is me. 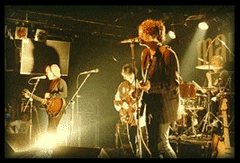 To finish all the audio bits to Margot Bandola's film. Get another Typewriter album out there. It's currently in progress.

Well, I dunno....don't put all your eggs in one island. No man is an omelette.

Really - never take the joy of music for granted (one's own, or the musics from other talented artists), right?

Typewriter.com
Posted by When The Sun Hits - All things shoegaze. at 2:00 PM