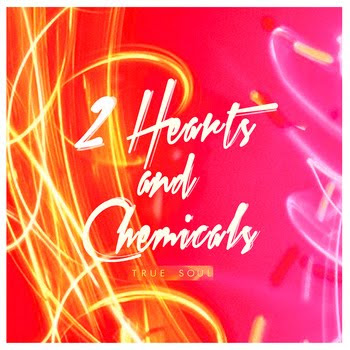 It would be a stretch to say the music of 2 Hearts & Chemicals falls strictly into the shoegaze genre, but as Eli Lhymn (the band's only consistent member; a revolving cast of friends makes up the rest of 2 Hearts) mentioned in his recent interview with WTSH, the shoegaze community has been extremely supportive of 2 Hearts' music. I think this is more evidence proving something that I posit quite frequently - "shoegaze", in the modern sense, is much more than a certain sound. It's an atmosphere. It completely makes sense to me that 2 Hearts has such a following amongst gazers; they are drawn to the dreamy atmosphere of this music.

One of the most striking things about True Soul is the sheer cinematic quality of it. It's an album best heard in it's entirety; listening to it otherwise doesn't cause the music to lose any of its magic, by any means - it simply alters the spell somewhat. As a whole, this album can take you on a journey; any journey of your choosing, in fact. On this journey, you're in the driver's seat, but True Soul holds the map.

Perhaps this is getting too abstract. But metaphorically speaking, isn't this precisely why we listen to music anyway - to be taken elsewhere; to exist in a different place, to be transported in some way? 2 Hearts does this very well, and I think this is why True Soul is such a satisfying record to listen to. It has that ability to transport you elsewhere, and along the way you realize there is no true destination to reach. It's the journey itself that matters.

Heavily synth-based and dreamy throughout, True Soul is filled with an air of nostalgia. Five seconds into the first track (which is the title track, "True Soul"), and the feeling has already descended heavily upon you. Just roll with it; you're in good hands. The beat comes in, then the vocals, and it starts to become The Song You've Been Waiting to Hear. (You know the one I mean.) The synth work in this track is absolutely otherwordly. One of 2 Hearts & Chemicals' strengths is orchestrating a very well-crafted melody, then creating just the right atmosphere for that melody to exist within. Like any title track worth its mettle, "True Soul" does this incredibly well.

The transition into track two, "Won't Stop", is nearly seamless, carrying the same mood and atmosphere over from it's predecessor. A moving instrumental, it acts as the bridge connecting you to the next track, "Straight into the Night". This track is definitely one of the standouts on the album; a lush pop gem that's somehow both melancholy and hopeful at the same time. The song-craft is what I can't get over; it's impeccable. The tracks are a true and absolute pleasure to listen to.

The LP's midpoint, "Saturday", is another standout. Haunting synths and striking female vocals create such a sense of nostalgia, it's almost as if you've heard the song before. But you haven't heard this song, it's just the song you've been wanting to hear. "Midnight" is another instrumental high point - it perfectly captures the sound of a certain midnight, whatever night that might be to you. We've all lived our own individual midnights and everything that comes along with those nights; likewise, we've all had this particular kind of midnight before. You recognize it's sound immediately, of course, but you could never explain it with words. You're not meant to.

By the time you get to track eight, "Runaway", you're feeling pretty damn good. Who cares where you're going; you're enjoying the ride. A gorgeously arranged instrumental that you could drift away into. The last track, "See You Soon", has all of the same elements that a song in the final scene of a film might have. It somehow revisits every theme or mood you've heard in True Soul and arranges them into a breathtaking and beautiful end. It would be almost heartbreaking, except a comforting nuance in the melody sends you off with the knowledge that you'll return; "See You Soon," it calls.

Stream True Soul in it's entirety
or Buy it on Bandcamp: