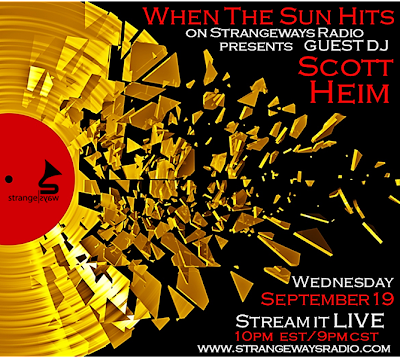 Scott Heim, creator of “The First Time I Heard” e-book series and author of novels Mysterious Skin, In Awe and We Disappear, will be guest djing When The Sun Hits TONIGHT! When The Sun Hits is Strangeways’ weekly shoegaze and dream pop radio show, normally hosted by DJ Amber of When The Sun Hits blog. She’ll be handing over the reins at 10pm EST on September 19th to Mr. Heim, who will be djing a full 90 minutes (that's a 30 minute bonus!) of his favorite shoegaze and dream pop music, as well as sharing his thoughts about the tracks, why he chose them, and discussing “The First Time I Heard” series. Log in to the Strangeways Chatroom during the show to chat with Scott and the rest of us Strangies.

Anyone familiar with Heim’s work knows that he is an avid music fan and self-professed music nerd, with a special place in his heart for shoegaze and dream pop music in particular. Heim’s writing tends to invoke the same dreamy, atmospheric space that shoegaze music is so well-known to occupy. For the film buffs, Gregg Araki’s critically acclaimed film adaptation of Mysterious Skin brilliantly captured the distinctive mood of Heim’s writing via its outstanding soundtrack, which heavily featured shoegaze music.

Heim’s most recent work revolves around his project, “The First Time I Heard” series. This is a series of music-related e-books that collect brief, conversational first-person accounts by musicians and writers about the first time they heard a specific iconic band. The first five books focus on (1)David Bowie (2) Cocteau Twins (3) The Smiths (4) Kate Bush and (5) Joy Division/New Order, with future books loosely planned to be based on The Pixies, Roxy Music, Public Enemy, Abba and more.


Don’t miss this very special edition of When The Sun Hits. Stream it live TONIGHT! Wednesday, September 19th at 10pm EST on Strangeways Radio.
www.strangewaysradio.com
Posted by When The Sun Hits - All things shoegaze. at 7:37 PM