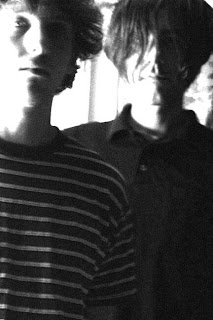 Ceremony consists of two members: Paul Baker and John Fedowitz. If you haven't heard Ceremony's music before, the fact that they are only a duo is almost hard to believe, considering the glorious (and gorgeous) cacophony they create. But then, these guys are masters at what they do; before starting Ceremony, they were both members of the highly lauded but now defunct Skywave (a band that also included Oliver Ackermann, currently of A Place To Bury Strangers, and the mastermind behind the effects pedal company Death By Audio). Ceremony is, without a doubt, one of the most talented and beloved contemporary shoegaze acts currently creating music. If you haven't heard their 2010 LP Rocket Fire yet, well, that's just criminal! It is beyond excellent (as is their entire back catalog), and certainly tops this blog's list for one of the best releases of the year. When The Sun Hits absolutely adores Ceremony, having followed them since the Skywave days, and we are beyond stoked to feature an interview with them. We hope you enjoy this in depth interview with both members; they are legends in the making, make no mistake about it. 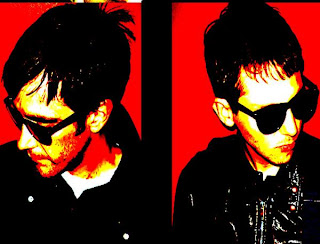 1. Where did the name "Ceremony" come from? Both Danny and I have always assumed that it is likely a reference to the classic Joy Division/New Order track of the same name. Is there any merit to that? 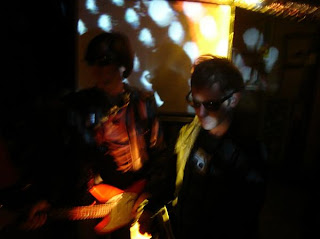 Paul - Yeah, John and I had just started playing as this new group a while after our old group Skywave sort of dissolved, and we had a gig lined up, but we didn't have a name. We used to play that song as a cover in Skywave and always loved it, so it was just meant to be a little tribute to a song we liked. Then we had another gig and used the same name, and so on and so on. We had no idea there was a hardcore band from California with the same name...it has caused some confusion, but I think we started first.

2. How was Skywave formed, and what was the evolution from Skywave to Ceremony? 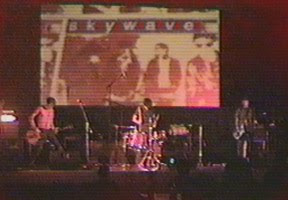 Paul - Oliver Ackermann and I started Skywave when we were in high school. A few months after we started, we got John to play drums for us. I could write a book about this, but whatever... We did the Skywave thing until about 2003, when I really just lost my motivation and inspiration. Oliver moved to NYC and started A Place To Bury Strangers. I was fine with just recording songs for myself, but John had a bunch of songs he wanted to play live, so I said I'd play guitar for him. Then we just kept going, with the mentality that if it ever stopped being enjoyable, we would just stop. Either of us can end this at any time, no harm done. It's like I used to feel that I was fighting the world when it came to music, especially during the Skywave days. Then, right after we split up, it seemed like this sort of music had a resurgence in popularity, and we missed the boat. But this way it's good, we only answer to ourselves, and I think we're our own worst critics. I could be wrong about that. 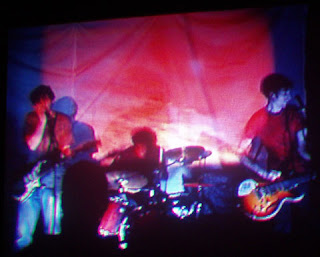 John - I think Paul is right about "we're our own worst critics" that's with Skywave and Ceremony but I'm still having fun with Ceremony. When Skywave started I was the new guy and I never really spoke up about much. I just started playing drums. Paul and Oliver were playing different CDs for me of music I hadn't really heard before, and saying "play beats like that" but almost all of the stuff they were playing was stuff with drum machine and it's hard to play on time all the time. After playing with them and touring a lot it started to feel like work. Some of our songs were so fucking fast. After playing 8 songs I would throw up outside the club. The throwing up I do now with Ceremony is at band practice and I'm okay with that. Ceremony in the beginning we were just having a good time. The only time we played a show is if someone asked us and for the most part that's how we still do things. 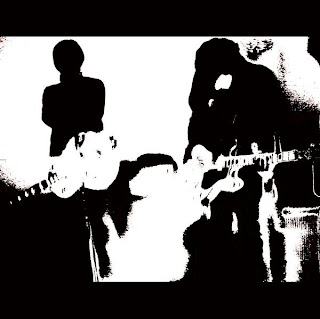 3. Is it strange to the see the now-defunct Skywave grow more legendary as time goes by? Of course, you've all gone on to your own separate and successful projects (you guys with Ceremony and Ackermann with APTBS), but would a Skywave reunion in any capacity (a show, an album, etc) ever happen?

Paul - It's kind of strange, because it felt like we played for so few people and now it seems like 100 times that amount of people remember seeing us. And they know the songs, own the albums in one form or another. I'm certainly not opposed to playing as Skywave again sometime, but it's not really a priority for me. And I just don't know when we would get a chance to practice or work on things.
John - Yeah, it's too bad that Skywave isn't together anymore because Oliver, Paul and I could have made a real impact on music. With us splitting up and creating two different bands it's sort of diluted the whole effect of what we had in mind. It's really neat to hear people tell us they'd like for us to reform, but by now a new album would never happen. Or it would take ten years for anything to materialize, if ever. I would love to play a tour as Skywave in the future.
4. Can you tell us what you've been working on and what you've got forthcoming in the near future (new releases, tour, etc)? 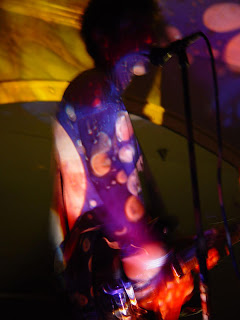 Paul - We've got a new split LP with Stellarium, a great band from Singapore, coming out soon on Custom Made Music. We've also got close to enough tracks for another album just about completed. We're always working on new songs, and since we don't play live all that often, it leaves us with lots of time to record.
5. What is the most important piece of gear for your sound? Any particular guitars/pedals/amps/synths you prefer?

Paul - I like Fender Jaguars and Jazzmasters for cool tones, as well as hollow and semi-hollowbody guitars for making feedback. I have an old Magnatone from the 60's that sounds really great,

too. I use an Alesis Nanoverb for the combination chorus/reverb setting it has. I've used that since Skywave. As for amps, I am torn between Fender tube amps and my Marshall JVM half-stack, so if the venue is big enough

I'll play through both. And I like playing with various fuzz and distortion pedals, and my Dunlop Zakk Wylde wah. Basically most of what I use anybody could find in a Guitar Center or something.

John - I don't record or play live without my Nanoverb and Big Muff. I try to get my live sound 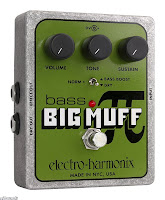 on bass to sound like a heavy rhythm guitar by playing chords and using two guitar amps, one transistor and one tube. That's because our drum machine and samples include low-end bass frequencies. I wish left-handed people had more options for guitars, I'd like Gibson to make me a Custom ES-137, sunburst with a black pickguard, pearl inlay, silver hardware, and a Bigsby.
6. What artists have most influenced your work? 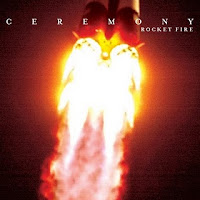 Paul - I think there are the obvious ones, like the the Cure, My Bloody Valentine, and the Jesus and Mary Chain, and then the less-obvious. Hank Williams Sr. was an amazing songwriter. The Misfits were probably my favorite punk band. I love 60's girl groups like the Crystals and the Ronettes, and bands like the Byrds and Tommy James and the Shondells. "Mirage" is an awesome song. All kinds of stuff, like Leonard Cohen, Linda Draper, whatever hits me as good, I guess. 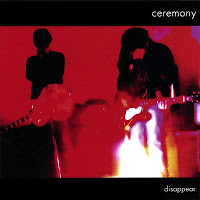 John - Stuff that I listened to before I met Paul and Oliver was more punk, like the Ramones and the Misfits. My songwriting has definitely been influenced by Sonic Youth. Their songwriting formats are not the normal verse-chorus-verse-chorus and I think that's where some of my songwriting has been influenced to do different things. I've definitely confused Paul with some of my song structures. On the other hand, I really love some of that early shoegaze stuff, I just got into it on its way out.
7. Do you consider what you are doing to be "shoegaze"? Do you feel that you are part of the shoegaze/dream pop scene, or any scene? 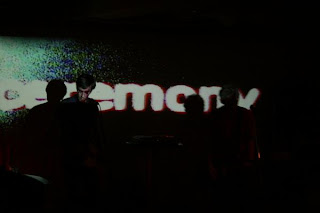 Paul - Not really. I mean it's an influence, but mostly the rocking side of it. I get bored by groups that just have some chorus and delay and play long songs that don't really go anywhere. I mean, it can be okay on recordings, but not in a live setting. Slowdive were an amazing group, but a lot of people took what they were doing and just made it boring. I don't really know what the scene is. If we lived somewhere else, maybe I'd know more. We're just sort of making music in our own little world.
John - I don't know where we fit in. Maybe that's a good thing. We're too noisy for the pop crowd, too poppy for the noise crowd, not shoegaze-y enough for that crowd, and where is everybody else like me?
8. What do you think of modern shoegaze bands? Any favourites?

Paul - Well, I don't know if they consider themselves "shoegaze" or not, but my favorites are Screen Vinyl Image, A Place To Bury Strangers, the Lost Rivers, and Stellarium.
John - I'd like to add Ringo Deathstarr and The Pains of Being Pure At Heart. 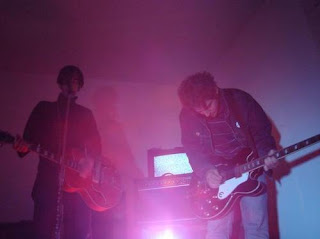 Paul - The Raveonettes and Ladytron are some of my favorite groups that aren't "shoegaze" oriented I guess. I recently saw "The Lives of Others" again and was reminded of how good it is. I lived in Germany before and after the wall came down, so maybe that makes it more interesting to me, I don't know. And I've been working on a book called The Age of Social Catastrophe for a while. It's really interesting, but reads like a textbook, so it's taking me a while.
John - I like to watch World War Two documentaries, I'm always interested in learning more about that period in history. I don't know how Big Star escaped me before, but I've recently gotten into them. Also, I'm always down with watching The Fat Boys on Youtube. Stick 'em!!!

10. If you had to choose one Ceremony track that would be the ultimate definition of your sound and aesthetic, which would it be?

Paul - Um, maybe "Stars Fall" because it's very noisy, but has a really pretty melody going on, I think.
John - I like "Don't Leave Me Behind", I feel like it's rock and roll to the extreme.

Paul - I don't know, I'm just trying to not make this world a worse place because I'm here.
John - Don't dwell on regret, you can't change the past. Always try to do the right thing. 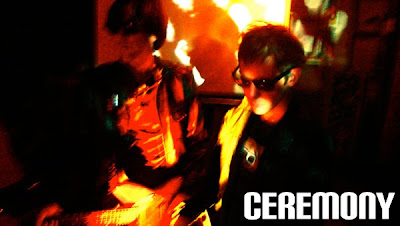 Posted by When The Sun Hits - All things shoegaze. at 8:30 AM