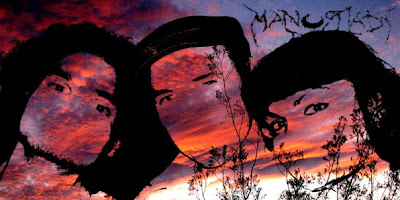 When The Sun Hits Interviews Manorlady
Manorlady is based out of Charlottesville, Virginia, and comprised of family members Aaron Bailey, Melissa Bailey, and Donald Wooley. The band got their start circa 2009, playing dynamic live shows filled with dense harmonies and programmed beats, often matched with beat-synced video originating from an affected VHS source. Manorlady spent some time re-working and crafting their material to eventually form their debut LP, entitled Home, which was released in April 2011. A very promising debut, the album put the family band on the map. Earlier this summer the band released their sophomore LP, Ego Oppressor, which is a much darker and more focused album based on a suite of short stories about oppressors/the oppressed. I've been listening to this record all summer and I am still shocked by how raw, emotional and near-perfect the tracks are. Highly recommended. As the band likes to say, they were children of the 1990s, making the only music they know how; it sounds like the future to me, and the future is sounds amazing.
How and when was Manorlady formed?

The band was formed in early 2009. We had jokingly come up with the idea as we goofed off with some old band instruments while back home in CA for the holidays. Aaron had recently broken his ankle in a climbing accident and needed a new hobby. He had played in bands in high school and college, but nothing for awhile, and this was a chance to get back into music. Donald had been classically trained in piano and played multiple other instruments in school bands, but nothing like this. Since we all lived together anyway, Melissa, who did not play anything besides flute in middle school, decided to try and pick up the bass guitar to fill things out. 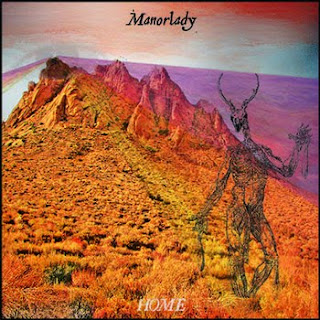 We just released our second full length, Ego Oppressor as a CD+DVD combo, as well as Boyhood Freedom, a 7" through Cellar Hits, on June 18th. We're doing a short tour through the Southeast at the end of July in support of these, playing a lot of towns we haven't been through before. We also already have a couple songs for an EP that we're considering putting out on cassette at some point in the next few months. We'll see! We're hoping to relocate back to the West coast sometime this fall after Aaron finishes up his PhD.

Do you consider your music to be part of the current shoegaze/dream pop scene, or any scene? Defining one's sound by genre can be tiresome, but do you feel that the band identifies closely with any genre? How do you feel about genres in music, in a general sense?
Genres can serve their purpose, as they often work very well in retrospect, but in the present tense they often feel phony. This categorization helps other people get a quick understanding of what a band sounds like, but it's often a pretty narrow definition and will almost never accurately describe what we (Manorlady) do. We have a hard time seeing ourselves fitting into any one scene, as our music tends to cross into different genres without really belonging to any one of them. Do we see ourselves as part of the current shoegaze/psychedelic movement? Maybe. Hopefully in a greater sense contemporary shoegaze takes on a greater breadth of sub-genres and isn't simply rehashing what happened in the '80s and 90s. 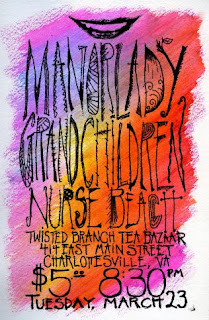 I don't know, they're great. Some of our favorites are A Place to Bury Strangers, Asobi Seksu, Tamaryn, Boyfriend, Ringo Death Starr, and Tame Impala. Locally and touring we've also come upon bands like The Sky Drops, Birdlips and The Diamond Center, who have been doing really great things for this scene.

AB: My Ibanez Roadstar 2 which has a great tremolo bridge, and so far, but hopefully not forever, the interactive Ableton/midi-foot-pedal set up. I've been using a ProCo Rat and Fender Twin since the beginning, and am always finding new things to do with my Akai Headrush 2.

AB: On the latest album we only used programmed beats. It made sense to begin with that, but that usually involves making alternate versions for each musician. This time we recorded all the instruments together and were lucky to not have to do very many overdubs. After doing vocals and before saying we're done, we'll typically re-evaluate and make sure it makes sense. We perform with Ableton, so have the advantage of simply recording with it as well. What would I recommend for others? Go to a studio, it's easier! But if you don't take my advice, make sure you have great neighbors. 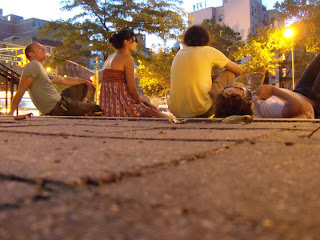 AB: It's clearly a miserable scene. It seems like the only way to survive is to already be famous or do everything yourself, be extremely talented, extremely lucky, and extremely smart with your money.

DW: I feel that the music industry, like most things, is accumulating into more and more of a colossal pile of shit. This is coming from an ignoramus who doesn't really pay attention or care about what is happening in the world...

MB: If there is a positive, it is that it is incredibly easy to access the music you want and any artist can be heard by a larger and more diverse population of people. On the other hand, it is really difficult for artists to maintain financial stability or get the credit they deserve, especially for those of us who are doing everything on our own. 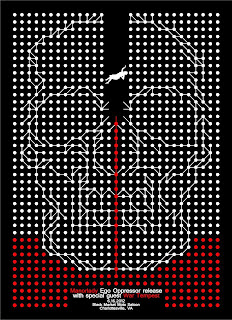 All we've every really know is DIY. Working with Cellar Hits recently was pretty great. Having an independent point of view for ideas and a completely different fan base and network was everything we could have hoped for.

They all have their moments. Vinyl is a great way to relax at home, cassettes and CDs are great in the car, and mp3s are a pretty great way to get through the work day. That being said, we are usually looking to add more to both our vinyl and cassette tape collections than any of the others. And yes, we are still making CDs. 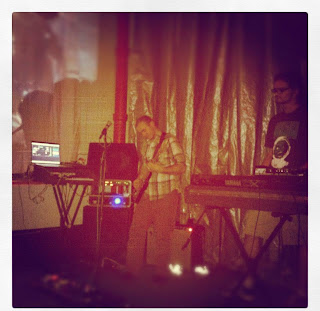 AB: Definitely the folks at Warp Records in the '90s. Those guys, in my mind, made me realize it was possible to perform electronics in the same way that a rock musician performs. Them dudes in Pink Floyd made it clear that an album must be a cohesive story, and have a beginning and an end. Also, I've definitely never held a guitar the same way since hearing My Bloody Valentine for the first time, so I guess I owe some credit to Kevin Shields -- me and at least 10 million other people out there.

DW: For me, most of my parts are pretty much just random and spontaneous. I don't think I have particular influences unless of course it's already part of my playing style and I just haven't realized what it is yet.

MB: I feel similar to Donald. The whole idea of even being a musician still feels weird or foreign to me, so although I'm sure the music I listen to probably influences what I play, it's difficult for me to identify. 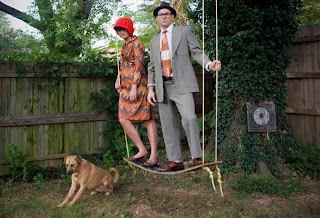 AB: I don't really have a whole lot of time to read stuff as I'm trying to finish up school. In the past year I've gotten more into technical metal and Texas/Western psychedelic rock, like Black Angels and Sleepy Sun. While I can't name any visual artists in particular, except maybe local hero Thomas Dean, I've definitely begun to appreciate many of the technical subtleties in hand screen-printing shirts and posters. Translating the "all possible" digital realm to physical media is something that can take a lifetime to get right. Learning is an ongoing process.
DW: I'm into many Japanese manga, anime, games and the people/language itself. Currently reading the Dark Tower, FMA and Fruits Basket series; recently seen Moonrise Kingdom, Midnight in Paris, and Boys on the Run; frequently listening to Sigur Rós, Bjork, The Middle East, Beach House, Nick Drake, Boris, and Songs:Ohia...

MB: Lately I've really been into Sharon Van Etten, Broadcast, Other Lives and Family Band. Favorites like The Cure, Type O Negative and Deftones are also never far off. I've always been an avid reader and love books of all types. I recently finished Crime and Punishment, and am currently reading The Girl Who Played with Fire. 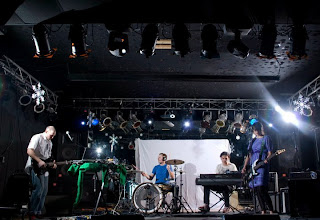 If you had to choose one Manorlady track that was the ultimate definition of your sound, which would it be and why?

AB: "Dog on High." I like that song because as an electronic band it's really difficult to stay organic, to stay fresh. Performing this one requires that 'jam' sense - that everyone is paying attention to everyone else, and when stopping/starting the beats throughout, we're all right there the whole time. That song in particular has some quiet/ loud moments, it showcases the more complex programming that we do, and it requires that you immerse yourself in it. As the first track on Ego Oppressor, it's sort of like the album gate keeper-- if you can appreciate that one then the rest of the album is for you.

DW: "Children..." seems to be the most representative simply because I think it is kind of a fusion of our developing sound from when we first started to where we have been recently going. It has elements reminiscent of songs off of "Home/Home Away" such as "Red Juice" (with it's defining chorus and mostly prosaic song structure) and "Trees" (which is driven by its abruptly powerful transitions and interesting melodies), in addition to being a significant part of our current direction and evolution, with stronger writing and heavier, darker tracks... 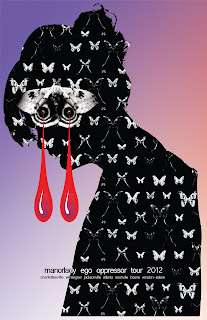 
Aaron writes the lyrics, guitar, and/or drum tracks and shows them to us; Melissa and Donald attempt to come up with parts while playing along with Aaron, but not necessarily at the same time. We continually refine and modify parts as needed to make the most coherent sound we can.

Posted by When The Sun Hits - All things shoegaze. at 8:45 AM