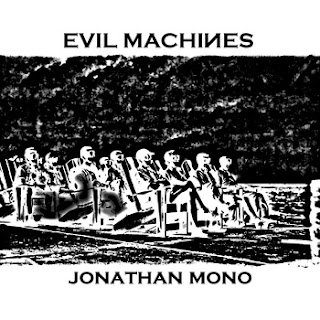 Evil Machines, the third of Jonathan Mono’s July 2012 releases, is the logical stepchild of the internationally acclaimed Life.in.Mono (Music for Headphones, Evol Recordings, 2011). Where Life.in.Mono was a love-letter to Krautrock offset by post-punk vocals and noisy, shoegaze guitars, in Evil Machines Mono strips the guitars and vocals from the arrangements, letting the machines do the talking.

That is not to say that what remains is an electronic reflection of a bygone era looking at their future. Evil Machines gazes forward to our own future, one that is chaotic and alienating, but it does so with an unexpected sense of hope. Beyond the fighting, beyond the loneliness of the abyss, there is a glimmer. The sparkling arpeggios and expansive synths open up an array of possibilities, even under the oppressiveness of the staccato squawking (angry robot overlord?) that is a recurring motif throughout the album.

While preserving references to classic Krautrock bands La Dusseldorf, Kraftwerk, Harmonia and Tangerine Dream there is something new and distinct to Jonathan Mono--an aggressiveness that takes the noise, feedback and squealing of post-punk and mechanizes them, like the dismemberment and reassembling of a heavily effected guitar played by a futuristic species of robots. Mono’s psychedelic and space-rock roots are presented in a way that steps away from the Jazzmaster and massive pedal board he uses in Music for Headphones.

With this July’s three-part series of full-length album releases, Chalan on July 10th, Kill Surf City on July 17th and now Evil Machines on July 24th, Jonathan Mono distinguishes his solo efforts from Music for Headphones, who has an album scheduled for release late in 2012.