Strange Week in Music
on the
Strangeways Radio Blog


Strange Week in Music gives each Strangeways DJ an opportunity to highlight one track that is related to his/her show that week; the article will include information, links, images, a video/stream of the tracks and where they can be purchased. You can think of it as Strangeways' Week at a Glance. 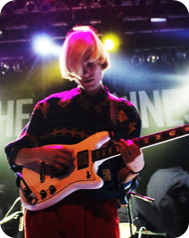 DIIV (pronounced “dive”) is an atmospheric and autumnally-charged Brooklyn four-piece fronted by Z. Cole Smith. DIIV craft a sound that is at once familial and frost-bitten. Indebted to classic kraut, dreamy Creation-records psychedelia, and the primitive-crunch of late-80s Seattle, the band walk a divisive yet perfectly fused patch of classic-underground influence. Oshin is DIIV’s debut LP on Captured Tracks.