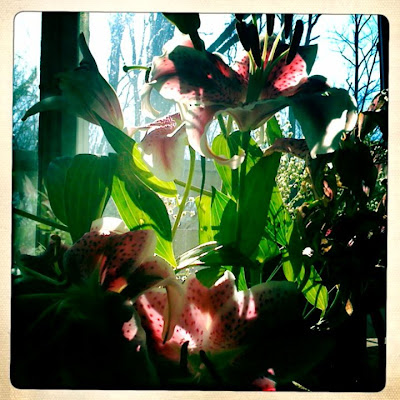 Guest writer Anas Al-Horani brings the awesome yet again with this recent interview he did with the relatively new dream gaze project The Stargazer Lilies. For those unaware, The Stargazer Lilies is comprised of two members: John Ceparano and Kim Field. Names sound familiar? They should! Both Kim and John are also members of the NYC disco shoegaze band Soundpool. Not only do these two create sonically breathtaking music, but they also have quite the sense of humor. When The Sun Hits hopes you enjoy this tongue in cheek interview with John and Kim, and if you don't, well, take your dose of Fukitol and kindly move along.

How were The Stargazer Lilies formed?

The Stargazer lily was created in 1978 by Leslie Woodriff, [2] a lily breeder in California. (from wikipedia).

Before the band was formed, was this the type of music you wanted to originally play? Or did your tastes gradually change? Have you always wanted to form a shoegaze band?

Well, we originally wanted to form a shoegaze/newgaze/dreampop/psychgaze/discogaze/noisepop/dreamgaze/electrogaze band but already had one, and we were also considering a noisegaze/dronegaze/postgaze/nogaze/crunkgaze/shitgaze/dazedgaze/gazepop etc. band but, we were ultimately looking for something a little different.

Which brings me to question number 3, do you consider The Stargazer Lilies a shoegaze band, roughly speaking?

No, roughly speaking we are the opposite of shoegaze...which is of course "stargaze". 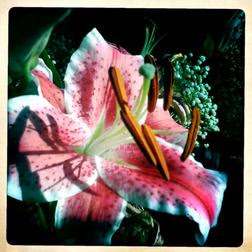 What is it that inspires you to create music?

God only knows. We love that song.

Each band has its own disc-shelf of influences. Can you name us three albums that have influenced you the most?

Mirrors in Your Eyes, Dichotomies & Dreamland, On High. [all Soundpool LPs]

As a band, what are you aiming for? What is it that you hope to achieve? Or, to put it more simply, what is the message you're trying to convey through your music?

God only knows...seriously this time!

My Bloody Valentine for all 3.

What do you think of modern shoegaze bands, and this recent shoegaze craze? Any favorites bands? Any comments?

What is the most important piece of gear for your sound? And which is your most favorite?

What is your philosophy, on life, that you live by, if any?

Posted by When The Sun Hits - All things shoegaze. at 9:15 AM