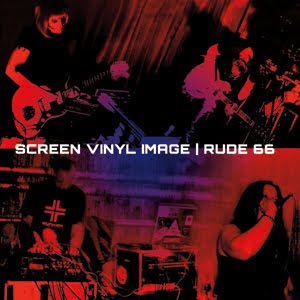 ***
Since I am a fanatic about packaging, I'm going to say right off the bat: the packaging for this 7 inch is immaculate and eye catching. Custom Made Music has been doing an absolutely amazing job in recent months with their releases, and this split 7 inch is no exception. It's no secret that I'm a vinyl junkie, so these things are important to me.

Side A: Screen Vinyl Image. Tomorrow is too Far.

With an intro slightly reminiscent of Black Celebration-era Depeche Mode, but with a little more swagger and a lot more attitude, within seconds I'm sold on this track. As it unfolds, the guitar and synth work, flawless from the get go, become more intricate and layered, while the beat takes up residence as the dark backbone of the song. It begins almost subtly, but by mid-song it's already building into something much more powerful, essentially transforming into a straight up darkwave dance track. But while darkness blankets the track, the beat is so right that one doesn't really give a fuck about said "darkness"; it's time to dance. This is what New Order would have sounded like, had Ian Curtis not died and fronted the group instead (never mind that New Order wouldn't have existed without Curtis' death - just suspend your imagination a bit, eh?). Best heard in a dark room, accompanied by a strobe light.

I don't know what to call this music - Doomgaze? Coldwave? Darkgaze? Black Celebration-gaze (I would really like it if this sub genre existed because that sounds too ridiculous NOT to exist)? It really doesn't matter, the point is Screen Vinyl Image can't be lumped into the usual categories that you can assign most bands to. They are unclassifiable, and they probably like it that way. I know I certainly do. It's a stamp of originality. Cheers, SVI, for another impeccable release. You have never failed me, and that's kind of a big deal.

Tomorrow is too Far (live). Footage shot by Ceremony.

As for side B, I didn't know much about Rude 66, except that he is a Dutch electronic musician living in Amsterdam, so I went in with a fairly blank slate when I flipped the 7 inch over. I was, however, delighted by the track title straightaway - I figured Rude either had balls, a sense of humor, or a huge ego, and since I like all of those things, my interest was piqued.

As soon as the needle hit the first groove, I was greeted by a hard, predatory beat that would be perfectly at home in an industrial track, and a dirty guitar with tons of fucking attitude - I knew I was in for a treat. The dark beat is slow and steady, almost like a march - I hate to draw parallels, but imagine NIN's "Closer" with a more bloodthirsty undertone. Once the eerie synths and vocoder kick in, I am straight up smitten (my adoration and borderline obsession with the vocoder is well documented). Rude 66, you're pushing the right buttons for me. And did I mention the use of the vocoder?

But this isn't a simplistic song, despite the simple elements used; Rude makes every move deliberately, and you just can't argue with a well crafted song. So we have a cold, steady beat, some sort of Dionysian guitar growl going on, and then it comes. The chorus: a robot voice ominously chanting the words "I am God" repeatedly. So pair the elements I've spelled out above with this chorus, an emotionless Robot God repeatedly announcing himself, and the end result is: completely bad ass. A brilliantly put together track, in which almost every element can be seen as a metaphor - but those are your job to puzzle out. I just work here.

Stream the 7 inch release below via bandcamp (and buy a digital copy for a measly $2), buy the 7 inch via Custom Made Music HERE, and check out a live video of SVI's "Tomorrow is too Far" above and Rude 66's track "Machine" below.