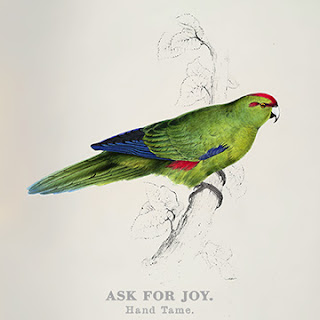 Ask for Joy's newest effort, the 4 track gem of an EP entitled Hand Tame, is one of the most charming pieces of musical art I've heard this year - and I do so love to be charmed. Ask for Joy is a one man show, with Austin-based Aaron Rossetto acting as the songwriter, performer, and producer of the project. Darren Emanuel of Drowner mastered the Hand Tame EP, deftly layering analog keys and plenty of full-bodied reverb over pop-perfect drum machines and gorgeous harmonies, all of which lends itself eloquently to the EP's thematic pulse - daydream-induced escapism and the longing that goes with it.

The EP's opener and obvious first single, "Summer Getaway (I Got the Beach)", was released just prior to Labor Day weekend, the perfect soundtrack to the last fading days of summer. The track begins with sparkling sounds of nostalgia and some impressive synth work; as the vocals come in, and then the drums, it's clear that all of this is building to some other plateau - and the (first) pay off comes at about 1:30, when the song takes a turn and levels out into shimmering indie pop perfection. But don't be fooled, this song still has other places to take you. The track has something almost akin to movements; it "levels up" several more times, piling epic upon more epic until the very end. The song takes you away from wherever you are and places you somewhere else altogether; somewhere better, a different headspace, a place where you can cast off whatever "real life" chains that burden you and shackle you to the city - a place where the beach is all yours and pleasure can be found in the simple things. Goddamn, that strikes a chord with me. I've got a crush on this song, and it's making my head spin.

The next track, "Hey Tracey", changes direction in sound quite a bit, though the thread that binds the two songs is evident. Slow-burning, psychedelia-induced and guitar-heavy, "Hey Tracey" also plays on one's nostalgia and need for escape, but in a different way - it makes one turn inward rather than outward. It feels like a musical nod to The Jesus and Mary Chain, The Verve, and when it ramps up and gets noisy, a little bit of Spacemen 3, too. In this track, the longing isn't for a faraway dreamplace; it's for a faraway dreamgirl with the power to shake up the mundane, every day world with just her smile. It's a dreamy, fuzzed out pop song that hits all of the right notes. Ending with a refrain of "please say yes" (a plea to Tracey, of course), one can't help but wonder why this Tracey person would ever resist.

The third track, "Learning to Fly", is quite possibly the most bewitching cover song I've ever heard. This is Tom Petty's 1991 single, reimagined for the starry eyed dreamers rather than the flannel clad rockers. It is one of the few cases in which I feel the cover is as good as, if not better than, the original - to my ears, anyway. And I say this as a Tom Petty fan - because come on, who doesn't love at least ONE Petty song? (Dude could write a fucking song!) Before my first listen, it didn't click with me that the track was a Petty cover. Within 7 seconds of play number one, upon hearing those familiar opening notes, the realization hit me; I was over the moon about it. At 20 seconds, when that glorious, fat synth comes in, I nearly lost my shit. I haven't been that excited to hear where a cover song was going in...like, ever. AFJ takes Petty's song, already laden with the same themes the EP is covering, and amps it way up - to mythological-like proportions. I am trying to avoid using the word "epic" too many times in this review, but the word nails this cover. At the climax of the song, Rossetto has the charming sense to leave in my beloved "yeah!" at about 4:08, which is my favorite Petty yelp in the original song.

The EP's closer, "Dragonflies", is the perfect end to the journey. It starts off as another slow-burner, echoing a bit of "Hey Tracey", but as it slowly unfolds it builds until it finally detonates - an explosion of wild, heavy guitar and teeth-rattling drums soundtracking the final lyrics, which finds Rossetto musing upon the idea of becoming one with the insect the song is named for. 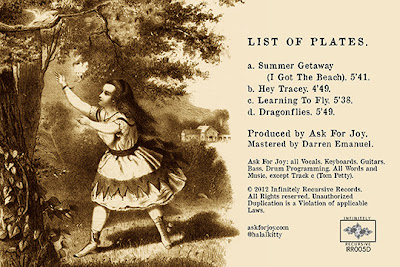