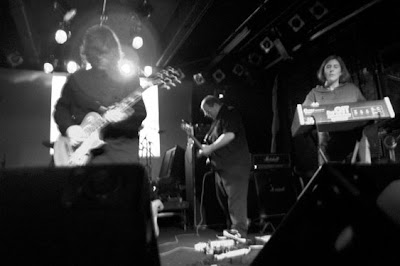 When The Sun Hits Interviews
Aaron Snow
of Landing
Interview by: amber crain.

How and when was the band formed?
Landing was formed in 1998 by myself and Adrienne.  We had been playing shows as a two piece called May Landing and decided to shift focus a little bit from the weird noise drone we’d been playing toward something lighter and poppier.  We dropped the “May” and became Landing.  In the fall of that year we added Dick Baldwin on bass/guitar and Daron Gardner on drums/bass.  They brought more of a post rock aesthetic and are two awesome bros.  Our longtime friend Peter Baumann joined the group when Dick Baldwin left in 2004, but since 2007 we’ve been a three piece (Daron, Adrienne and Aaron).


We released a new album (our first since 2006) on Geographic North this past summer and will be releasing a 12” mini LP called “Wave Lair” on These Are Not Records sometime in the next few months.  Although we don’t have any definite plans to tour, we have been playing shows in the northeast pretty regularly and are shooting for some kind of tour next summer.  After taking so many years off, we are having a BLAST playing and releasing music again! 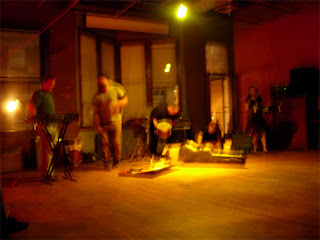 Defining one's sound by genre can be tiresome, but do you feel that the band identifies closely with any genre? How do you feel about genres in music, in a general sense?

Back in the early 2000’s we were part of the “Vessyl Collective” spearheaded by Adam Forkner (Yume Bitsu/White Rainbow) and included us, Yume Bitsu, Surface of Eceyon, Dirty Projectors, Alex Bundy, etc.  We played shows together and recorded at each other’s houses.  Our aesthetics were pretty wide ranging, so it was kind of an odd fit- more like a group of friends.  Since we went on hiatus in ’06, it’s been SO cool watching the resurgence of shoegaze and drifty, droney musics!  It’s been really inspiring actually.  As we refocused the band after taking so many years off, we decided to let our earliest inspirations guide us.  We all share a love of early Cure records, Cocteau Twins, The Smiths, Depeche Mode, Joy Division and the like so we set out to make music informed by what we would like as 17 year olds.  I don’t feel like Landing fits too comfortably into one genre.  It’s more fun for us to try new ideas and change up our sound from album to album- sometimes even from song to song within an album.  I do think that musical genres are a necessary evil, though.  I never would have gotten into Seefeel if I hadn’t been into Cocteau Twins beforehand.  While genres tend to pigeonhole bands, sometimes incorrectly, they also open them up to a lot of fans that might never hear of them otherwise.  That being said, I always hated the fact that we were tagged as being “slowcore” for years and years. 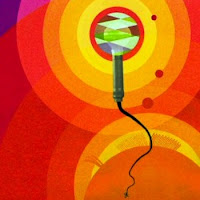 What do you think of modern shoegaze/dream pop/psychedelia artists, any favorites?
I’m kind of old, so I’m not all that familiar with what’s happening now but I LOVE what I’ve heard from Belong, Lyonnais, Bear In Heaven, Moon Duo, The KVB, Fever Ray, White Rainbow, Emeralds, Lotus Plaza, Forma, Warm Ghost, lots more…  I LOVE the fact that people are being inspired by the music that inspired me in the 90’s!  Seeing all the love that My Bloody Valentine, Slowdive, Chapterhouse, Lush, Seefeel, and others are getting is awesome!

What is the most important piece of gear for your sound? Any particular guitars/pedals/amps that you prefer?
The most important piece of gear for me at the moment is my laptop, actually!  We’ve finally made the leap to using Ableton for live shows and recording after years of resistance.  For my guitar sound, the most important piece of gear is my Boss DD-20.  I have up to 5 slots for preset delay settings, which makes playing live WAY easier!  Now, instead of struggling to find the proper setting for each song, I can program it in and it’s there whenever I need it.  A close second would be a vintage Electro Harmonix Poly Chorus that I bought fairly recently.  It’s got that 80’s chorus sound that I LOVE.  I’ve totally rediscovered my love of the chorus after swearing it off for years.  I’m a fender guy when it comes to guitars and amps.  I’ve got a ’68 Jaguar and a ’72 Mustang that I’ve used for every Landing release.  I play through a Fender Bantam Bass. 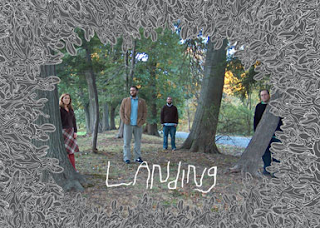 What is your process for recording your music? What gear and/or software do you use? What would you recommend for others?
Until this last album, we recorded on a ½” 8 track tape machine.  Totally old school.  Now we use Ableton Live, which has opened up new possibilities and helped with the songwriting process.  We’re making beats, looping parts, re-arranging songs and using effects that we never could have a few years ago.  It was daunting to learn how to use the new software, but once we figured it out, I would never go back to doing it the way we used to.  I’d recommend anyone just starting out to buy a little 4 track recorder and work your way upward.  I’m glad I did it that way.

I have mixed feelings.  On the positive side, the ability to directly interact with our fans is incredible!  We’ve released a lot of our rare stuff and older records on Bandcamp , which we love.  Facebook has allowed us to promote shows like we never could have before.  On the other hand, because it’s so easy to record and release music, it’s hard to stand out amongst all the millions of bands vying for attention.  It’s really easy to get lost in the shuffle.  On the whole, I’m really glad that labels still want to put our music on vinyl and I love the fact that people can easily download it on iTunes or Bandcamp or whatever.  I think the positives outweigh the negatives.


When it comes to label releases versus DIY/bandcamp and the like, what is your stance, if any?
We’re really lucky that labels are still interested in putting out physical versions of our stuff.  The guys at Geographic North really sort of kicked us in the butt to make new music… we had sort of given up.  I feel like our situation is ideal and I’d be really bummed if we were forced to ONLY release our music digitally.  We wouldn’t hesitate to release digital albums though, and we actually have a few ideas for special Bandcamp only releases.

Do you prefer vinyl, CD, cassette tape or mp3 format when listening to music? Do you have any strong feelings toward any of them?
My preference is vinyl, for sure.  I like how engaging it is to have to physically turn over the record and I also love the fact that it forces the listener to listen to an entire album!  While I love the LP, I mostly listen to mp3’s because it’s so easy.  Cassettes are really cool too, we used to release a tour cassette every year!  It’s great that they’re making a comeback.  I’m glad CD’s are dying, however.  They are awful.  LP’s and MP3’s, that’s how I do it.

Can you tell us a little about what you are currently into (books, films, art, bands, etc.)?
We’ve been busy working on recording music lately, so I haven’t been listening to that much music but I have been listening to a lot of Kate Bush.  I was raised on Kate Bush, my Mom LOVES her!  I’ve been introducing my daughter, Elise, to her music, which has been awesome.  I’m reading a few books lately- “The Wordy Shipmates” by Sarah Vowell and “Manhunt” by Peter Bergen.  I’m a history nerd, so I usually go for that sort of thing.  Since I have a 5 year old daughter, I watch a LOT of children’s movies.  My recent favorite is Frankenweenie- totally vintage Tim Burton.  My sister is part of an art collective called The Women’s Auxilliary.  I’ve been to few of their installations.  They are fantastic.

If you had to choose one track that was the ultimate definition of your sound, which would it be and why?
We’re really proud of the song “Heart Finds the Beat” off our most recent album.  It incorporates a lot of the feel and texture of our older stuff, but moves into more rhythmic territory.  It’s hard to say for sure, but I can see us doing a lot more rhythmic stuff in the future.

Can you tell us a little about the band’s song writing process?
I’ll usually write a part on guitar or bass and start layering from there.  Once I have the skeleton of the song figured out, I’ll get together with Daron and we’ll work on arrangement and other ideas.  Daron is amazing to work with, he’s the most thoughtful, positive dude EVER- and his parts always blow my mind.  Once the song is 95% complete, we bring Adrienne in for the final say.  She’ll usually have a tweak or two.  Vocals come last and it’s usually up to Adrienne to decide who sings on what.  If she wants to sing on something, she does!  Recently, I’ve been writing songs in Ableton and on my Fairlight iPad app.  A few songs on our forthcoming mini LP “Wave Lair” were written on the sequencer.


What is your philosophy (on life), if any, that you live by?
I don’t really have any sort of rigid philosophy other than I try to treat others the way I’d like to be treated.  It’s  pretty simple.