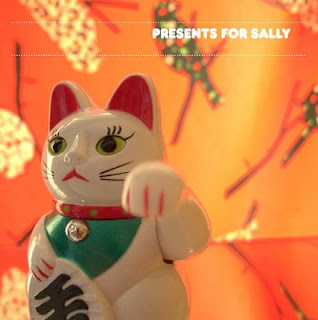 Matt Etherton of Presents For Sally has teamed up with Anne Marie Taul de Neergaard and Paul Lopez (of The Shoegaze Collective & Spell 336) to offer yet another amazing way you can help raise money for Danny via an auction for some rare Presents For Sally items; one package, bids are open, winner gets it all!
Here is the message from Anne Marie + details:

Background story is, as some of you may know, that one of our greatest human capacities of the Indie scene has been fighting serious disease for over a year now.

Danny is co-creator of When The Sun Hits blog + doing truly amazing stuff with his band Deepfieldview, and for years, he's been one of the main discoverers, promoters and supporters of new bands all over the world.

Luckily, his health seems to be improving and he's heading the right direction, but he still has some way to go before he's back to his old and sparkling, shoegaze-loving self. He still needs treatments, and above all, he needs to be able to have his lovely wife by his side! Some action has already been taken in order to help financially - and this one should be a whole lot of fun!!

Without Danny, many of us wouldn't be where we are today - and without truly and deeply believing in everything he stands for, none of us would be doing what we do, taking part in this music scene. Here's your chance to make a difference and add something really special to your music collection, as well!

The Loot:
The package contains a white label test pressing of the current Presents For Sally // Anything Anymore 7". Only 5 of these were pressed and the band have only ever seen 2 of them - and one of those 2 can be yours. Included with this is a copy of the released version of Anything Anymore as well as a copy of the first ever 7" Catch Your Fall which sold out a long time ago (this is the only copy the band have) Also, there's a signed copy of the cd album A Touch Of Joy, A Touch Of Sadness with various promo posters and postcards/flyers the band still own.

Matt of PFS says, "We know we won't get megabucks, but whatever people can spare to help Danny at this time will be worth it as none of us can fucking even begin to imagine what they are going through.. Danny has always said nice things about our band and him and Amber were strong supporters back when no one else cared.... so SPEND YOUR MONEY!!!!!"

The person with the highest final bid gets the whole package of rare Presents For Sally items!!

To place your bids, message me (Anne Marie Taul de Neergaard) or Paul Lopez on Facebook.

We will post updates about how the bids are coming!

Posted by When The Sun Hits - All things shoegaze. at 6:21 PM