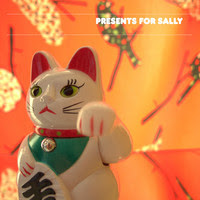 Artist: Presents for Sally
Release: Anything Anymore 7 inch single
Release Date: March 4th, 2013
reviewed by: amber crain
Presents for Sally triumphantly return with a brand new 7 inch single, entitled Anything Anymore, for Distant Noise Records; this is the band's first new material since 2010’s successful debut album A Touch of Joy, A Touch of Sadness. Having been a diehard Presents for Sally fan since the early "Flowers Falling Sideways" days, as well as adoring everything the band has released since then, I've been very much looking forward to this marmalade-coloured porcelain kitten-covered  7 inch slab of vinyl (which, by the way, will be limited to only 250 copies, so waste no time obtaining yours on March 4th). I have been starved of new Presents for Sally tunes for far too long, and these two new songs, "Anything Anymore" and "A Thousand Ways to Say Goodbye", really hit the fucking spot for me.

The lead track, "Anything Anymore", may be the band's most polished and well written song to date. The sonic structure is incredibly well crafted, with perfectly layered sounds, dreamy guitars and a chorus so catchy, you almost forget how sad the words are. In this way, the song recalls the best of 80's UK dream pop for me; the dancing-with-tears-in-my-eyes phenomenon, I like to call it. In other words, the lyrics could break my heart - but somehow I feel incredibly uplifted by the song, anyway. Something about the vibe reminds me of Disintegration-era Cure; it makes me feel the way "Pictures of You" makes me feel - a gorgeous, overwhelming wave of nostalgia, joy, and sadness, all at once. Anna's sweetly delivered chorus, "I don't believe in anything anymore", gets me in the same place as Robert Smith's croon of "...I almost believe that they are real." This gorgeous song is perfectly executed dream pop, plain and simple. Bigger, brighter, and whiter than snow...

The b-side, "A Thousand Ways to Say Goodbye" (which was also just released as a song on Volume One of our brand new 300,000 compilation) does what every great b-side should do: be the yang to the a-side's yin. Just as melodic but far more noisy, it has a very early-Smashing Pumpkins vibe it. Which is a rad vibe to have, mind you. The guitarwork is fantastic, with enough fuzz and reverb to make any gazer fistpump involuntarily. The melody is hypnotic, and gorgeous layers of psychedelic noise freak outs are woven perfectly in between a driving beat and a more poppy guitar layer, tinged with Gish. The song's mood is quite dark, but in the best way possible. It is the antithesis of the a-side, as it should be, and so essentially what we have here are two incredibly executed, completely different, and equally excellent songs. This is how you make a great 7 inch and Presents for Sally nailed it. Highly recommended is an understatement.