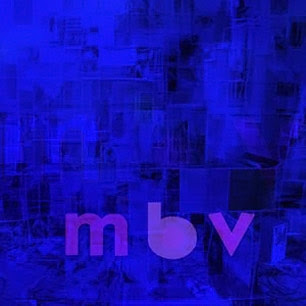 When The Sun Hits Review Series:
My Bloody Valentine. m b v.
Review by: Ellie Sleeper

I will hesitantly admit that I have never owned an album from My Bloody Valentine before, though I have listened to Loveless on a few travels with friends. Normally, my tastes in all things gazey and pedal-centric have almost always leaned more towards dream-pop and towards more ambient fare, or towards the opposite pole of abrasive, punk-inflected noise. You may express some shock at my previous lack of exposure, but perhaps you’ll share in some of the excitement I felt at the opportunity presented via new material from these architects of noise. Perhaps my standpoint will also help guide other younger listeners who are slightly unfamiliar.

On first listen, I was actually most struck by the drum production herein; I am not accustomed to a noise or shoegaze band having drums that stand out much, barring a few exceptions, but the machine-like, punchy attack of the snare kept my attention in the more languid moments.  Ó Cíosóig’s drumming is unrelenting when it appears, and it is for his contributions that I say the latter portion of the album is arguably stronger and more compelling than the first third or so. His signature also helps define the different movements of the record, in a sense. If the first third is meandering, the second third is fairly agreeable; the brief lull of “Is This and Yes” gives way to fairly hypnotic territory with clearer textures and more pronounced vocal harmonies exchanged between Butcher and Shields. The second trio of songs is where I consistently found myself returning for repeated listening, and it isn’t to be missed.

The final portion of the album seems to attempt to make up for lost time and is considerably more punishing; while the sense of space may still persist slightly into “In Another Way,” there is no denying that “Nothing Is” seems the aural equivalent of being blindfolded and tossed into a cage match. I left feeling both bloodied and exhilarated. I can imagine it being a very intense moment in a live set, perhaps as an interlude. It isn’t easy to digest, but the album needs it.

As someone who hasn’t previously been on the My Bloody Valentine bandwagon, some of the bliss and anticipation may not be hitting me as strongly as those who have already formed an attachment. Overall, I found the album pleasant and listenable, but I did not find it to be a game-changer or anything unexpected, save for the previously-mentioned diversion of “Is This and Yes.” What M B V does right as an album is to not be an embarrassing lapse into unfocused material or modern tropes and approaches; the band sounds like themselves here and they sound as though they knew what they wanted to do. In light of several groups across several genres who have made “comebacks” lately and failed with poor decisions, and in light of the huge shadow Loveless casts, avoiding such pitfalls is very commendable.