When The Sun Hits Review Series: My Bloody Valentine. m b v. Review by: Preston Maddox of Bloody Knives. 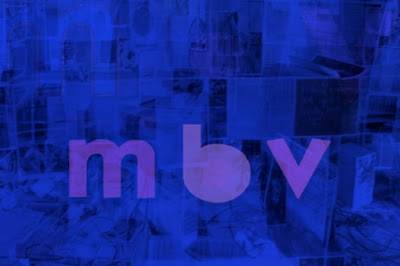 When The Sun Hits Review Series:
My Bloody Valentine. m b v.
Review by: Preston Maddox of Bloody Knives

Preston Maddox of Bloody Knives kicks off our WTSH Review Series - because one review of the new My Bloody Valentine album, m b v, isn't enough, obviously. What, did you think we weren't going to make a huge deal out of this?! We'll be publishing a series of reviews of the new album, in order to get a nice cross section of opinions. In fact, if YOU (yes, YOU) want to submit your thoughts on the new MBV album, we'll likely publish them right here, so email Amber at editorwhenthesunhits@yahoo.com for more info on that. We'll keep going on this series until it gets boring which, let's face it, won't be anytime soon. Enjoy!

In a fitting start to the process of listening to this record for the first time, the dropbox folder I got the download in was addressed from Danny, which while clearly impossible, makes all the sense in the world. Who else would I get the new MBV record from? Thanks Danny. (ed. he bought the vinyl, mk, so don't start with the "support artists" thing...)

Half of the release of this record was the wait surrounding it, and the hysteria around its release. For the cult that surrounds the band the moment of release was a "where were you on September 11th?" moment. For me I was backstage in St. Louis getting drunk with my friends. Christo tried to download the record from his phone and got an error. He checked Shoegazer Alive to see if it was there, still not available. We thought to look it up on the laptop to see if a better connection could secure the download but we never got around to it. I really didn't want to hear it then anyway. When you wait so long for something (for me it was 15 years) what is a few extra days?

The few extra days for most people must have seemed like an eternity. Watching people lose their shit on the internet was hilarious. Anything from "OMG THE NEW MBV IS OUT" to "OMG THE SERVER IS DOWN", to "I don't know what I care less about, the Super Bowl or the new MBV record".

No record is worth waiting 22 years for. Judging something on that basis sets an impossible standard. So I didn't. i judged just like anything else, on its own terms for what it is.
The waiting period I engaged in gave me the opportunity to judge people's reactions. It was unanimously held as a great record, which was a nice relief, it would have been sorely disappointing if it sucked. There was some whining about Shields steps into DnB. The most common complaint I heard was that the drums sucked, were too soft, etc. Isn't that the complaint on every MBV record? I thought the drums on "If I Am" were particularly cool. The beats are simple and musical, they fall in the background and move the song along as they should. I wonder what people want out of musicians when I hear this kind of criticism. The hypnotic trance of "Wonder 2" is created by the search for steady rhythm in the chaos. I guess these same people also think the vocals are not clear enough, or that Shields and Butcher should "sing out" more.

I wondered how their record would hold up against those they influenced. The idea of the genre of "shoegaze" is primarily defined by this band's sound. What became clear as I listened was that there was no band who will ever really sound like them, too unique it can't be copied. Too much a part of their era and too much a product of their own influences.

The Beatles influence was the most obvious difference in this band and pretty much every band who has copied them. The long chord progressions, the unexpected chord changes, the la-di-da vocal hooks. Very little of this resonates in modern music the creatives are making. The new era is a group based in the methodologies of hip hop, heavy metal, and dance music. Most nu-gaze bands wouldn't know where to start to write something like the long complicated chord progression in "Who Sees You".

"Who Sees You" is a lesson in mastering dynamics that has been long forgotten by many. The level is not steady, instead it steadily builds until the end where it blows up. There are contrasting dynamics in the song. So many songs sound the same today because in the era of the home producer there are few people who are skilled engineers. No red-line one-volume compression in this master.

While so much has changed outside of the band (their general acceptance, the music climate, the music business, the requirement for them to be a "pop" band) the thing that has remained the same is their place in music, which is that they don't fit in at all. Not even as a band above those they influenced. They occupy their own space, timeless and indefinable, unable to be replicated by anyone but themselves.

If I had to pick a favorite it would be "Who Sees You", with "Wonder 2" being a close second. The ambient meanderings of "She Found Now" and "Is This and Yes" are stoner gold.

Let's hope the next record doesn't take another 22 years to make.